By Brian HoraceJanuary 15, 2018No Comments 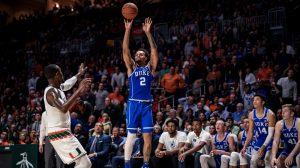 Despite 19 turnovers and a 31-6 deficit in fast-break points, Duke wins at Miami. Duke played a tough Miami team close through the first half with the lead volleying back and forth 10 times. Duke ended the half with a Grayson Allen steal and a Gary Trent Jr. 3 pointer at the buzzer to go up 2 points.

After a promising start to the second half for Duke with a Marvin Bagley III dunk, the Devils went on a 7:45 scoring drought. The second half saw Miami benefit from 7 Duke turnovers to add to the 12 they committed in the first half. Duke then went on to score 15 points in six possessions to cut a 13 point Miami lead, including a trio of 3-pointers by Gary Trent Jr. After trailing 66-53 with 7:59 left, Duke went on a 30-9 run to end the game going away.

[x_video_embed][/x_video_embed] Gary Trent Jr. was the comeback hero of the game for Duke scoring a game high 30 points going 9 of 14 overall and 6-9 from 3 point range. Marvin Bagley III, for the most part, was held in check by the Hurricanes but the freshman forward was still able to notch another double-double giving him the Duke freshman record at 15. Bagley dropped 13 points and 12 boards while his front-court mate Wendell Carter also earned a double-double scoring 15 points and pulling down 14 rebounds. Senior Grayson Allen had another off night shooting going 2-9 from the floor. Allen also had 4 turnovers but did have 5 timely steals including one right before the half that led to an assist to Gary Trent Jr. in a last second shot.

Freshman Trevon Duval added 17 points and 8 assists against 5 turnovers. Duval in a surprise stat shot 2 of 2 from beyond the arc for Duke – hitting a timely 3 during the Duke run to help seal the game. Clearly this Duke team has a ton of fight, but the issue remains that they are putting themselves in situations of their own making. Duke still needs to learn to give consistent effort on the defensive end of the floor. Offensively Duke struggled to have any sort of cohesion, too much standing around waiting for Bagley to get open instead of consistent movement without the basketball.

As an aside – hopefully people understand that a tweet is a snapshot of a moment and when I say something “seems” a certain way it is not meant to be taken as an absolute – hence the word seems. The reason tweets don’t age well is due to the fact that they are a momentary commentary and reaction – especially during a live tweet of a sports contest. So settle down playas.