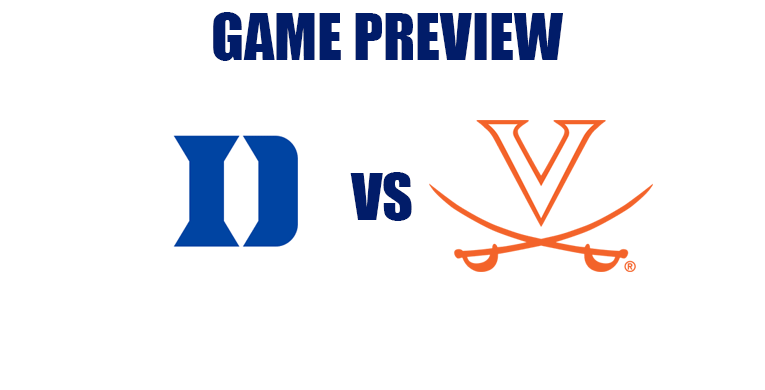 By Randy DunsonFebruary 14, 2017No Comments

The 12th ranked Duke Blue Devils will collide with the 14th ranked Virginia Cavaliers in an ACC showdown Wednesday night from the John Paul Jones Arena in Charlottesville, VA. The Blue Devils are coming off a narrow 64-62 home win over Clemson, and Virginia lost a tough one by an 80-78 score in overtime to Virginia Tech on Sunday. This will be the first and only meeting of the season, and Duke edged Virginia 63-62 last season.

The Duke Blue Devils did not shoot the ball well but still pulled out a close 64-62 home win over Clemson this past weekend. Duke shot just 42% from the field as fatigue may have played a role after just beating the Tar Heels Thursday. The Blue Devils played great defense, holding Clemson to a 37% mark from the field. Luke Kennard was tremendous once again, collecting 25 points, which included four three-pointers. The sophomore guard has now scored a combined 45 points over his last two games, and is averaging a team-leading 20 points per game, ranking him second in the ACC in scoring. No other Blue Devils player was able to reach double-digits with Jayson Tatum coming close with nine points. The 6-foot-8 freshman forward has been a force this season, posting 15.6 points along with seven rebounds per game. Duke is rounding into form winning five straight games and are now just one game back of first in the ACC with an 8-4 record. Duke is climbing fast in the rankings going from 18th to 12th this week in the Top 25 Rankings.

Duke features a potent offense, now averaging 81.9 points per game, good for 22nd in the Country, and feature a 48.2 field goal percentage. The Blue Devils play solid defense, conceding an average of 68 points per game, placing them 73rd overall.

The Virginia Cavaliers were edged in a tough 80-78 overtime road loss to Virginia Tech this past weekend. Virginia only shot 42.4% from the field, and the Hokies converted on 44% of their shots. London Perrantes did sink 17 points but he only went seven for 22 on the night. Perrantes’ poor shooting was only the third time in his last 12 games that he shot below 40% from the field. The senior guard is having a great season, averaging a team-leading 12.6 points per game. Kyle Guy added 12 points on 5 for 8 shooting in the loss. The freshman guard has reached double digits in points in three out of his last four games, and is now up to 7.8 points on the season. The Cavaliers are now 3-3 over their six five games however they have faced a grueling schedule that has seen them take on three ranked teams and two rough games at Syracuse and Virginia Tech in that span. Virginia is now one game back for the top spot in the ACC with a conference 8-4 record and fell two spots to 14th in the Top 25 Rankings.

Virginia is not a high scoring team, now averaging 69.3 points per game, ranking them 272nd overall, and own a dazzling 49.2 field goal percentage. The Cavaliers feature the number one ranked defense in the Country, allowing an average of 55.1 points per game.

Virginia plays great defense however, Duke is red hot offensively, and they are now shooting over 48% from the field. I expect Duke to have some success against the Virginia defense, and when we look at a snapshot of what the bookies are saying, the over is 5-0 in Duke’s last five road games. Virginia continues to get very low totals and the over has hit in their last two games, and the over is 4-1 in the last five meetings between these two teams.

When Duke travels to Charlottesville, the stakes will be high for both teams. UVA and Duke are virtually deadlocked in the ACC standings – both one game out of first place. The winner will keep pace while hoping for a Tar Heel slip up. Duke is currently riding a five game winning streak and can really cement themselves as a top tier ACC team with another road victory while padding their NCAA Tournament resume by defeating another ranked team – this time on their home floor. Duke will have to contend with the vaunted pack-line defense that Tony Bennett has made into his staple at UVA. Duke has a ton of offensive firepower to try to overpower UVA on that end of the floor but they will have to be disciplined and precise. UVA is patient on the offensive end, content to keep the game low scoring having only scored 80 or more 3 times this year conversely they’ve only given up over 70 points 3 times.

I am siding with Duke in this contest. Duke is playing their best basketball of the season and I cannot go against them right now. They have now won five straight, which included two road wins over Wake Forest and Notre Dame. The Blue Devils have found their scoring touch and are playing great defense, and are now holding teams to just 30% shooting from three point territory. I have not been impressed with Virginia as they have now lost three out of their last five games, and I know they play great defense, but they are a very low scoring team so Duke should be able to keep this one very close with their powerful offense. Duke wins 75-70.