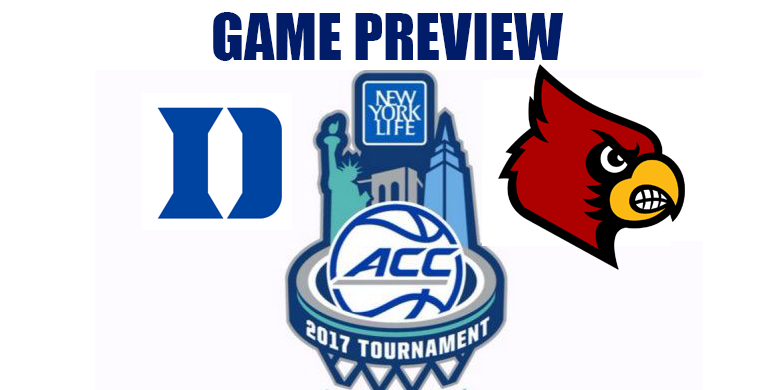 By Randy DunsonMarch 8, 2017No Comments

The Louisville Cardinals will clash with the Duke Blue Devils in the Quarterfinals of the ACC Tournament Thursday afternoon from the Barclays Center in Brooklyn. The Blue Devils went 11-7 in ACC play, and the Cardinals posted a 12-6 record in conference play. Louisville notched a 78-69 home win over Duke in the lone meeting in January.

The Duke Blue Devils persevered late in the game and came away with a 79-72 win over Clemson in the second round of the ACC Tournament on Wednesday afternoon. The Blue Devils shot a terrific 49.2%, and held the Tigers to only a 39% efficiency from the field. The Blue Devils spread out their scoring nicely with three players scoring 20 points. Luke Kennard was outstanding, going 9 for 20 from the field for 20 points. The sophomore guard is locked in right now, scoring at least 20 points in six out of his last nine games, and is now averaging a team-best 20.1 points per game. Kennard scored 17 points in the loss to the Cardinals in January. Grayson Allen only played 13 minutes and went 0 for 4 from the field for zero points on Tuesday afternoon. Allen is still apparently dealing with an ankle injury, and he is a key player the Blue Devils need going in this one. The junior guard is third in team scoring with 14.5 points per game, and scored 23 points in the loss to Louisville in January. Duke is now 2-3 over their last five games and will need to be very sharp in both ends of the court in this one. Duke is ranked 14th in the country in the Top 25 Rankings.

The Blue Devils feature a strong offense that is now averaging 80.4 points per game, ranking them 30th overall, and are shooting 47.4% from the field. Duke is allowing an average of 69.2 points per game, placing them 99th overall.

The Louisville Cardinals went 2-2 to close out their regular season and all but one of their conference losses this season came to a ranked team. The Cardinals recorded a solid 78-69 home win over Duke in January. Louisville shot a solid 47.5% from the field in the win, while Duke shot 46% and committed 18 turnovers. Donovan Mitchell played well, sinking 15 points on 6 for 12 shooting and added five rebounds. The sophomore guard finished the season off red hot, scoring 20 or more points in four out of his last five games, and is averaging a team-leading 15.9 points per game. Quentin Snider contributed with 13 points and six assists. The junior guard missed a few weeks with a hip injury and played well upon his return, now averaging 12.6 points along with a team-best 4.1 rebounds per game. The Cardinals did not lose two in a row all season, and they are a team that thrives on their strong defense and they can score too, making them tough to beat. The Cardinals finished the season ranked 10th in the Country in the Top 25 Rankings.

Sorry, but I am taking the opponent again. I am basing my prediction based on statistics, but more importantly, on each team’s play of late.

Louisville is the better defensive team, and they are holding the opposition to only a 39% clip from the field, and a 30% efficiency from three-point range. The Cardinals did a good job defending Duke earlier this season, holding them to just 69 points in the 78-69 home win. In addition, Grayson Allen seem to be hindered by his ankle in the win over Clemson and he went scoreless in just 12 minutes of playing time. Allen not playing at 100% is a big hit to Duke, as they will need all hands on deck to win this game. Louisville also has the rebounding edge and the Blue Devils defense has been very inconsistent against the higher scoring teams, so I am more confident taking Louisville in this one.