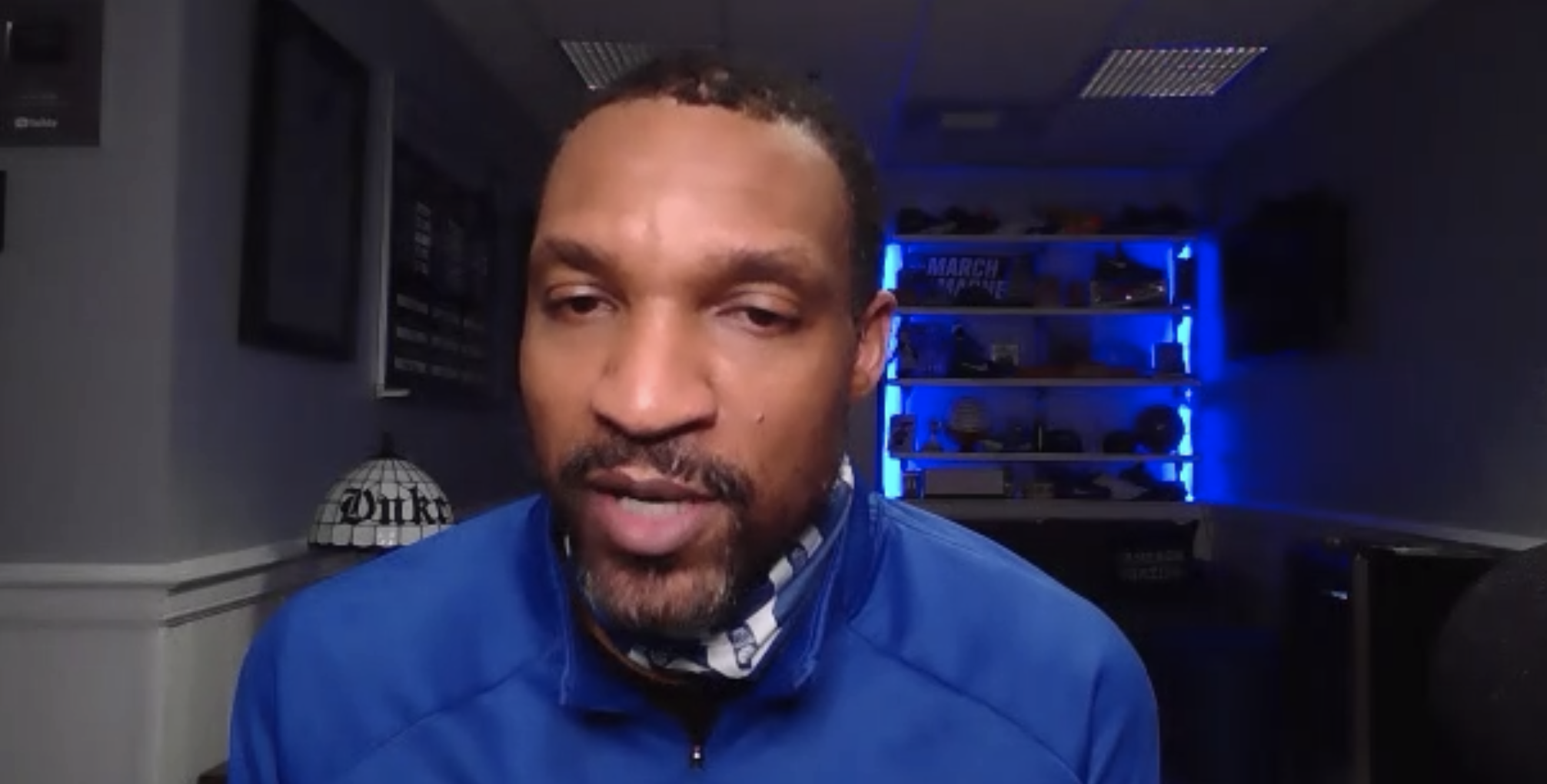 By Brian HoraceNovember 17, 2020No Comments

Third-year assistant coach and 2000 ACC Player of the Year Chris Carrawell fielded a number of questions, ranging from the NCAA’s announcement yesterday of the possibilities of a centralized NCAA Tournament, to the development of veteran players Wendell Moore Jr., Matthew Hurt, Joey Baker and Jordan Goldwire, to his expectations of this team’s freshmen class, and his impressions of graduate transfer Patrick Tapé.

On Matt Hurt and Henry Coleman’s Injuries:
“Matt is actually doing well, he worked out yesterday for about 45 minutes prior to practice and he looks good. He was able to practice yesterday actually until he had to leave and go take a final. So he’s doing better. And Henry, he just twisted his ankle a little bit and he’s a tough guy but you know, right now you just want to make sure they are 100%, and so if we needed him to play, both of those guys, they could play if it was a game today but just gotta make sure they are 100% healthy.”

On who’s stepped up as of late:
“The guy that I’ve seen that’s stepped up the most in my opinion is Jalen. Jalen Johnson, he’s starting to come around, he kind of started off a little slow early in the preseason, so to speak, but now you’re starting to see his talent kind of evolving a little bit. Just making plays, extremely versatile really good athlete, in transition, him getting downhill has been great for us. He’s a great passer, now he turns it over a little bit but he can make some plays with the pass that I didn’t know coming in, you see him you don’t think about him being a playmaker but I think that’s his best skillset, it’s passing the ball right now.”

On if he believes freshman Jalen Johnson is underrated compared to the team’s top recruits in recent years:
“Yeah, I think so. I think he is underrated. Not playing, though, most of the year last year – you could tell. When you don’t play or you play partially, it hurts you. Then, with everything going on with the pandemic, I think it set him back. Now, you come in and it’s go time, and so I think he had to get ready. I think he’s been putting the extra work every day, he’s running extra after practice, he’s getting extra shots and his conditioning has improved. I think he is starting to hit his stride. Now, he still has a learning curve, just learning the college game, but with that talent and if he could continue to grow, he’s going to continue to take off. But I would say he’s underrated.”

On what areas sophomore Wendell Moore Jr. has grown in since last season: “He’s been tremendous this preseason. The growth from your freshman year to your sophomore year – we look at Matt Hurt and Wendell Moore Jr., in the one-and-done era and you would think they had bad years, so to speak. But for freshmen to play those types of minutes and for those averages, if you look at their averages – in my day, coming back for their sophomore year, they would’ve been on covers of magazines, really. It’s just different now. The main thing and the most important thing that I’ve seen out of Wendell has been his confidence. There would be times in games last year when he was open and he wouldn’t shoot the ball, and you could hear the bench and then some fans yelling, ‘Shoot! Shoot!,’ and he would pass up open shots. I think just [being] a year older, working on his game all summer and then you come back, you’re older, you’re more confident and he’s playing with extreme confidence now. For us, that’s going to help us because he can shoot the ball, but you wouldn’t know it because he wouldn’t shoot. Now, when he’s open, we encourage him to take a shot because it’s a good shot. Even if he misses it, he shoots such a good ball that it’s easy to rebound it. His confidence has been the main thing from freshman year to sophomore year.”

On if the team is worried about the potential of rescheduling games after Michigan State head coach Tom Izzo and Syracuse head coach Jim Boeheim tested positive for COVID-19:
“Yeah, and you hope that those two legendary coaches are doing well. You’re always in the back of your mind thinking about the situation that we’re in with the pandemic. It’s been a worldwide thing. It seems like every day in our country, the numbers are increasing at a rapid pace. It’s always in the back of your mind, but what we try to tell our guys and what we try to control is to just stay in the moment. Stay in the moment, you approach every day in practice the same and just try to work, and then whatever happens, it happens. You can’t control it, really, because you just don’t know. You could be doing everything right and you could still somehow contract COVID. It’s been a tough year, but we see the light. November 25 – which is a special day because it’s my birthday, ladies and gentlemen on the call – so I’m looking forward to that. If we could just get to that day for our guys, for college basketball, it’ll be huge because I miss it and I know our players miss it. There’s going to be some cancellations, and so it’s a lot that we’re going to have to work through, but if we can do it together and the most important thing is that everybody is healthy and safe. That’s the most important thing. If it takes a game getting canceled, you don’t want that, but you do want everybody safe.”

On what he’s seen from graduate student Patrick Tapé:
“Patrick has been great. This guy has a smile on his face every time you see him. But it’s a different level and he had to get adjusted. When you come in, the competition is just different. He’s had to practice against really good players every day. From a result, probably the last couple weeks, he’s been our most consistent big guy. Every day, you know what you’re going to get out of Patrick. His intensity on the defensive end – he’s our best big in terms of ball screen coverage on the defensive end, and this guy can rebound with the best of them. His hustle and his effort have been elite at this moment and he’s an underrated passer. I don’t know if he had that, but I think that’s coming from playing in the Ivy League. That’s an Ivy League thing right there. He has a good feel with the ball and he’s just easy to play with. [He has a] great attitude. But he did have to go through an adjustment period like all of these guys. When you come into college and you’re used to doing it one way – the six freshmen and really, you do have seven freshmen because Pat is new to everything – and so you have to learn a new system, you have to work harder than you’ve ever worked, you have to get used to Coach K yelling at you for the first time. It’s all new, and so these guys and Patrick being an older guy, they’ve really responded well.”

On Duke co-hosting the Mako Medical Classic honoring Dr. Onye E. Akwari: “Dr. O – I know when I was in school, I saw him all the time. Coach K called him his fourth assistant coach, so to speak. [He had] a great family. He was a great man and for Coach K to come up with the idea since we were not going to go to South Dakota, it was just something that seemed right and it just felt right. It felt good to honor such a special man. It’s something that we take great pride in. We’re going to honor his name, honor his family and it’s special that we’re able to do that because he was such a big part of Duke Basketball, so when you think about Coach K and all the assistant coaches that come in, it’s also been a lot of great people around the program, Dr. O being one of them.”

On the development of Wendell Moore Jr. as a vocal leader:
“It’s just developed with his confidence a little bit more. As a freshman, you’re more so inclined to just lay back and follow. That happens – I did it myself. I would follow Wojo (Steve Wojciechowski) and Jeff Capel and as a freshman, I just shut up. I didn’t say anything, just run hard and shut up. But when you get familiar and you start to learn what the program is about and what Coach wants, you kind of fall into that role. He’s always had a good voice and now he’s using that voice. For him, that’s part of developing as well – not being quiet, not being as reserved. The confidence level with the playing, but also with the leading. He’s been good since we’ve been back. It goes off the court as well. He talks a lot on the court, but off the court these guys are all talking. It’s not a quiet group. You’ll hear Mark Williams, the tallest guy on the team – he’s one of the jokesters on the team. You’ve got Wendell, and Matt Hurt is even talking. From the time we recruited Matt Hurt in high school to who Matt Hurt is now, it’s night and day. For me, that’s the joy of college basketball. We talk about being in the one-and-done era, but it’s still college, and the joy of college is seeing these guys come in who work on their weaknesses and they evolve as players and people. That’s why I love college basketball. That’s why I love coaching college basketball, because you get to see these young men develop. It’s OK if they don’t do it in a year. I actually like to see these guys stay multiple years because you see growth. Nobody is ready to go to the NBA anyway. You see Zion [Williamson] and RJ [Barrett] and Cam [Reddish] – are they really ready? Well athletically, but you’re not ready for all the challenges of being a professional, and that’s what I like about college. I understand those guys – you have to go. The money is too good, so you understand it, but it’s nothing like a player growing and you get to see that growth, and I think we all miss college basketball because we all want to see it. We want to see Wendell Moore Jr. and Matt [Hurt] and see how they come back as sophomores. We saw how Tre Jones came back as a sophomore. That’s what college basketball is all about for me.”