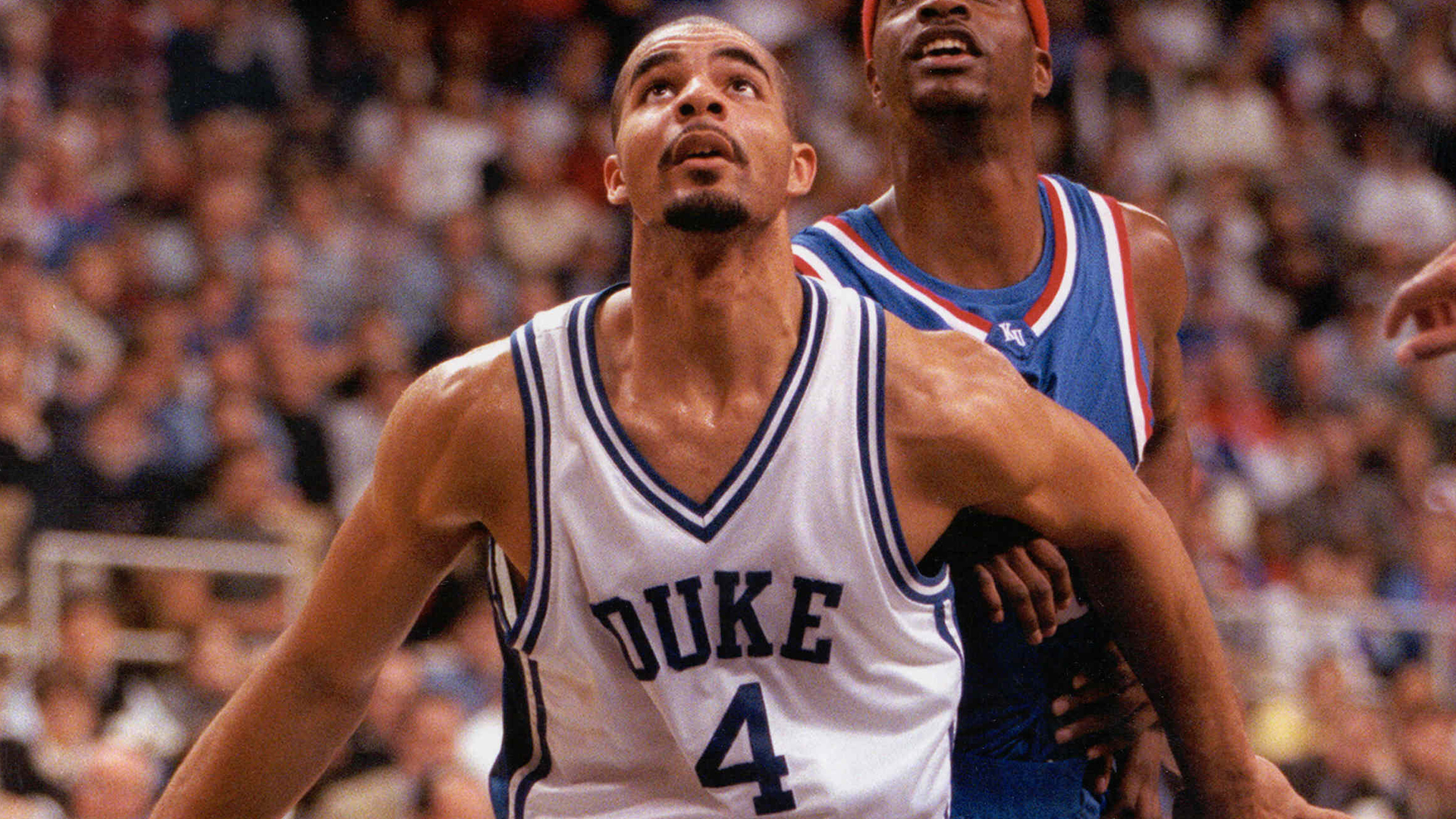 By Brian HoraceSeptember 16, 2020No Comments

DURHAM, N.C. (by Kyle Williams, Duke Communications Staff Assistant) – In the years following Carlos Boozer’s retirement from basketball in 2017, the former Duke standout has not struggled to stay busy.

Whether it be starting a new podcast with former NBA teammate Nate Robinson, having a daughter with his wife Aneshka, returning to his home state of Alaska for his annual basketball camp or joining the ACC Network as an on-air personality, Boozer remained surrounded by the game he loves and the people closest to him.

Yet even with his on-court accomplishments highlighting his résumé – an NCAA Championship with the Blue Devils in 2001, a Gold Medal with Team USA at the 2008 Summer Olympics, two NBA All-Star Game selections and countless more – the big man had always sought one major achievement that finally became reality this past summer. He wanted his Duke degree.

“I had always planned on getting it done,” Boozer said. “But as your life goes on, you become a grown up, you have a wife and you have kids. I made the Olympic team and my career took off. In so many different areas, it just became harder and harder to get back to Durham for two months. And, I live in Miami — It’s hard to leave Miami in the summertime.”

After earning All-America honors in his junior season at Duke, Boozer declared for the NBA Draft, where the Cleveland Cavaliers selected him in the second round. Even then, he planned to finish his academic requirements, for which he was just three classes shy.

Over the course of his 13-year NBA career, Boozer bounced to four different cities and looked to have credits transferred to local universities at each stop. But as he was repeatedly reminded, the caliber of Duke’s education yielded little room for credit transferring. During the summers, when many who seek their degree have the time to do so, his schedule was occupied by offseason training, international play and above all, starting a family.

While online course opportunities would have naturally fit his plans, Duke did not offer virtual learning. That was until the COVID-19 pandemic in March demanded many schools to shift to distance education. With the possibility finally presented to him, Boozer signed up for three summer session courses as quickly as he could.

“When COVID happened, it was kind of a blessing in disguise because it opened up options to go online,” he said. “It happened to be the perfect storm and I ended up contacting Kenny King right away.”

King is an academic coordinator for Duke Athletics, and during Boozer’s time as an undergraduate, he worked directly as an advisor with the men’s basketball team. Boozer recalls King helping his freshman class of six, which included Jay Williams and Mike Dunleavy, get their classes scheduled around a time-consuming basketball regimen. King organized study sessions, library hours and meetings with professors.

Even as Boozer’s NBA career blossomed over the next decade, the two remained close friends and King knew of his goal to eventually return to school to finish his education. When Boozer was on location for the ACC Network’s coverage of the Duke vs. North Carolina game on March 7 this year, the two met.

“I told him, ‘Kenny, I want to knock it out this summer if I can,'” Boozer said. “Maybe I’ll be able to come and do a session. I thought that maybe I could convince my wife to come down, rent an Airbnb and come to North Carolina for six weeks and knock out a summer session. Then, COVID happened later in March and everything got shut down.”

As nearly every educational institution across the country transitioned to online learning, King reached back out to Boozer immediately. A sociology major as an undergrad, Boozer selected his three courses – one during the first session, two during the second – and began to prepare for the culmination of his academic journey.

Naturally, as he navigated the ins and outs of virtual learning, King’s services were needed one more time.

“Obviously now, 18-19 years later, there’s a whole new system at Duke called Sakai which I didn’t know anything about,” Boozer said. “We didn’t have that back when I was in school. It’s really useful because you can go through all your classes, you can see your grades and see your syllabi. He really got me up to speed quickly so I could knock out my classes this summer.”

Each of the three classes would pique Boozer’s interests through different means. As one proved to be collaborative and engaging, another was equally as intellectually challenging. Of his many younger classmates, former Blue Devil Rodney Hood was one of them, also seizing the opportunity to complete his degree during the pandemic. Former Blue Devil Shavlik Randolph, who played at Duke from 2003-05, is also pursuing the completion of his undergraduate degree.

“The first class that I had, I actually took with Rodney, who is still playing in the league,” he said. “We took a class that was called Game Theory. It was basically about how to look at things in society as a game. If you’re being competitive about getting the job or you want to get the best grades in class – just using the game theory in society. We had a great professor. It was a great course and I recommend it to anybody.”

In the second session, which took place from the end of June through the first week of August, Boozer could sense the finish line, but was reminded of his passion for learning in the process.

“The first class I took was Race Identity and Power, which was an incredible class,” Boozer said. “We talked about race in our country, which is so relevant to what we have going on right now with equality and trying to get things back to being fair and equal for all races. It was an incredible class by Dr. [Martin P.] Smith, which I also recommend not just for African American or Black students, but every race and ethnicity. It touched on not only just whites and Blacks, but we also talked about Asians, Mexicans, different cultures and different beliefs.

“Then, I had statistics, which was quantitative reasoning and trying to figure out statistics by studying society through stats. We were looking at the census and, for example, you could ask a gender question like, ‘Do more men or women become reporters in Colorado,’ and you could break that down and cross-reference that with race or socioeconomic background or multiple different things. It was a cool class. It was tough, I’m not going to lie, because you have to involve quantitative things and different calculations, but it was a good class. Me and Rodney actually took that class together as well.”

On September 1, Boozer earned his bachelor’s degree from the Trinity College of Arts and Sciences. It marked the end of a journey that spanned 19 years and lingered on his mind through each stop during a remarkable playing career. The summer courses were by no means easy – he recalls statistics being a “foreign language” in the first two weeks – but Boozer’s initiative and dedication paved the way for accomplishing a long-term goal.

As news of his degree completion broke, Boozer was flooded with congratulatory text messages and calls from friends, family and colleagues. He said he had a conversation with Nazr Mohammed, a former Kentucky basketball player who graduated online in May. With all of the support and admiration he has come across, however, ones that stand out have come from members of the Duke Brotherhood nearly 20 years later.

“Jay Will hit me up right away. Dunleavy, Shane [Battier] – countless guys,” he said. “I talked to Coach K for like half an hour just about how awesome this is, because there’s so many other guys that want to do it too. All of my friends, my family, and my assistant coaches like Steve Wojciechowski, Johnny Dawkins – guys that were there when I was there – reached out to me as well. A lot of my ex-teammates – obviously, Nate James and Chris Carrawell were my seniors and had graduated. All my teammates reached out to me and told me congrats.”

“As soon as I saw [the text], I got chills,” said head coach Mike Krzyzewski. “I got so happy and I called him right away, and we shared a great few minutes together. What a terrific thing. I want to thank Kenny King, who had been our academic advisor for so many years. Some of these guys who were close to finishing their degrees. Carlos needed three courses and he’s been in the NBA and away for 19 years. Through this remote learning that we have right now, he was able to finish those three courses this summer.”

Now with time to reflect, Boozer recognizes the accomplishment of graduating from a university like Duke. While quick to point out others for helping him along the journey, he acknowledges the pride he feels in himself and maintains that he will be an advocate for other former players who left early to pursue their degree via online learning options. His experience this summer has reinvigorated his academic interest and is now considering Duke’s Fuqua School of Business for a master’s degree.

For now, Boozer hopes for an opportunity to celebrate his graduation with a traditional ceremony.

“If they have the option for kids this year that graduated to walk in their cap and gown and cross that stage – we’ll see, that’s obviously down the line and we’ll see what happens with academics and everything,” he said. “If COVID is gone and we can have a graduation, I’ll definitely be a part of it.”

No matter what is in store in Boozer’s immediate future, he is sure to attack it with the same enthusiasm and devotion that he has shown on and off the court. While fans of the program fondly remember his accolades, both as a Blue Devil and beyond, there is now another term that Carlos Boozer can be forever introduced by: Duke University alumni.