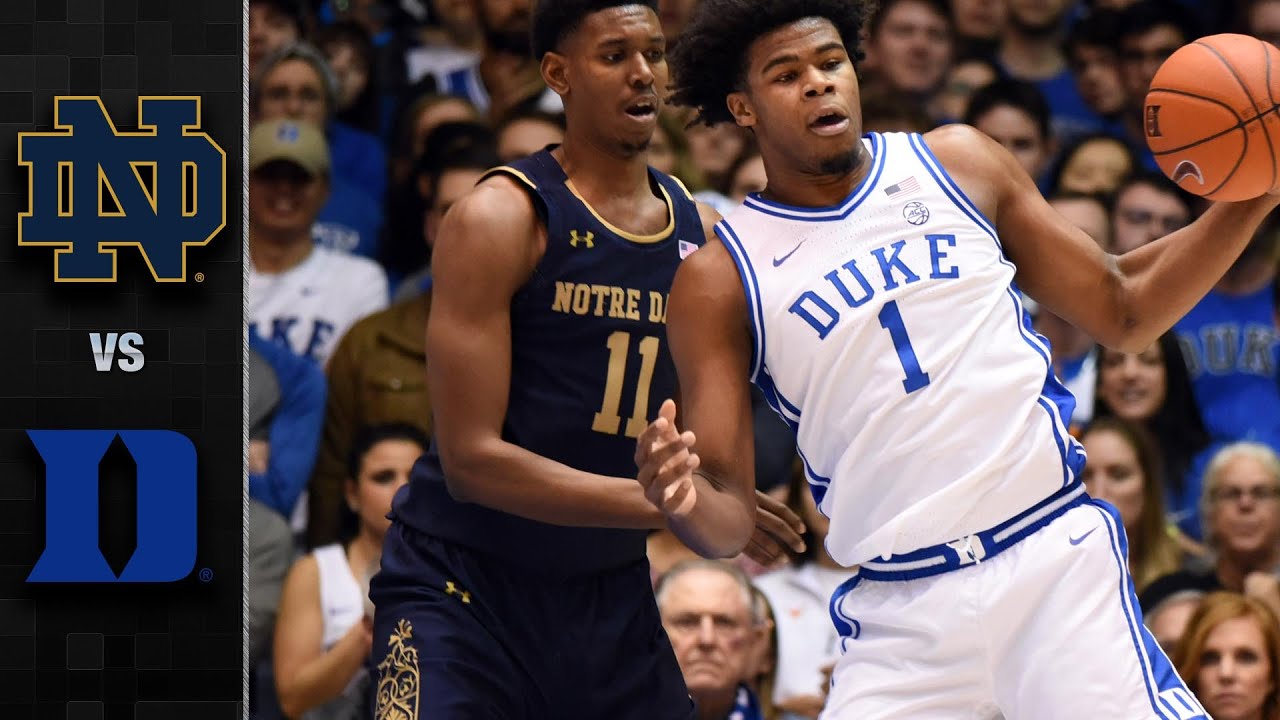 By Brian HoraceFebruary 16, 2020No Comments

Mike Brey began his career at Notre Dame dominating his former boss Coach Mike Krzyzewski with a 5-1 record. Lately Duke’s Coach K has reversed that tide by winning 6 straight against his former assistant coach.  With the ACC being as unpredictable as it’s been in a very long time even a supposed top heavy ACC has been a hotbed for upsets and surprises.

Notre Dame entered Cameron Indoor needed a win, the Blue Devils were looking to take care of business, extend their streak and keep pace as the second place team in the ACC and trying to secure a first place finish and a 1-seed in the ACC Tournament. Which is the tournament that decided the winner of the ACC – for those who don’t know.

The Blue Devils and the Irish traded punched in the first half with each team playing to their strengths. For the Irish it was the rebounding by John Mooney who had 7 in the first half to go along with his 14 points. His rebounds lead to 6 second chance points for the Irish but the Blue Devils countered with 10 points off of 9 Notre Dame turnovers. Duke’s pressure defense on all 3 levels as well as bad perimeter shooting by the normally sure-fire Irish allowed Duke to stretch their lead to ten before the half. Notre Dame ended the half only 1-10 from the 3-point line while the Blue Devils were 3-8.

The second half began with the Blue Devils no wasting much time pushing their 10 point lead to 19 within the first 5 minutes.

Up 20 the Blue Devils run began with a:

That resulted in a 20-7 run and a 33 point Duke lead, the Blue Devils never looked back. After getting zilch from the bench in the first half of the game (Coach K’s own words) the Blue Devil bench put on a show scoring 31 points in the second. Duke was lead in scoring by Vernon Carey Jr. who the Irish had no answers for. Carey scored 21 points going 8-10 from the floor and 1-1 from the 3 point line. Tre Jones added 19 points on 9-13 shooting, Jones also added 7 rebounds and despite having zero assists in the first half ended the game with 6 assists to only 2 turnovers.  The Blue Devils also got double-figure efforts from Matthew Hurt who scored 12 points on 5-9 from the field, with 9 rebounds and Alex O’Connell who also scored 12 points, going 2-5 from the 3 point line and 5-12 overall. The junior guard also added 5 rebounds and 3 assists.

The Blue Devils as a team shot 50% from 3 point range in the first half and 45.5% from beyond the arc for the game and held the Irish to under 25% from the game. The Blue Devils dominated in the paint to a 52 to 32 point edge. Duke also had a decisive advantage in fast break points 24-7.

After being out-rebounded in the first half by the Irish, the Blue Devils ended the game with a 40-30 advantage on the boards. Holding double-double machine John Mooney to only 2 rebounds in the second half.