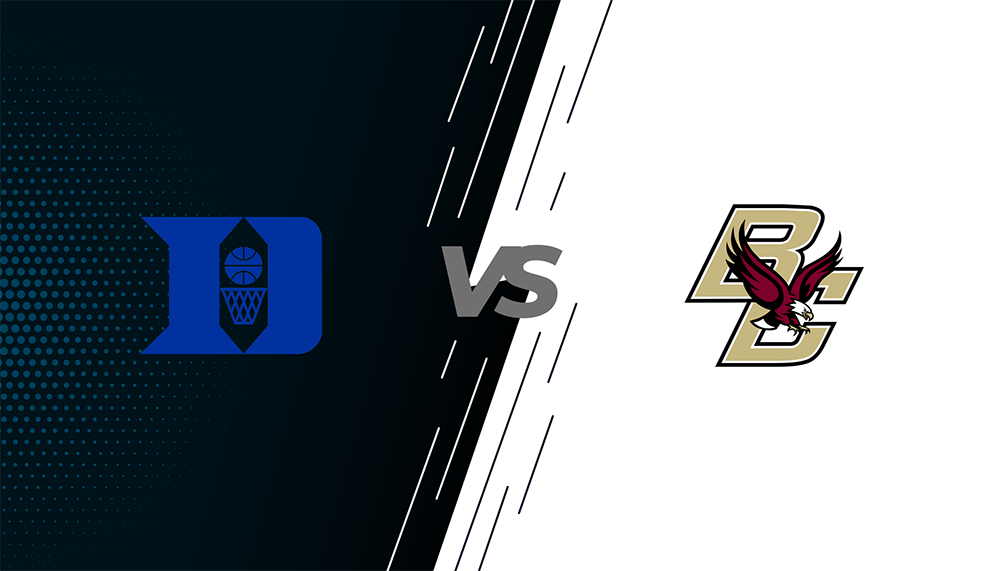 By Brian HoraceDecember 4, 2022No Comments

The Blue Devils opened their ACC schedule on Saturday afternoon with a 75-59 win over Boston College at Cameron Indoor Stadium. Two of Duke’s first three baskets were dunks by Dereck Lively II as Jon Scheyer’s team Made a concerted effort to look for the big man on lobs and rolls to the basket. Lively finished the game with 8 points and 3 blocked shots but his activity around the rim on both sides of the floor really spurred Duke on in this game. The Blue Devils opened up their first double-digit lead of the afternoon, 28-18, with a Tyrese Proctor layup at the 4:02 mark. Jacob Grandison led the first half scoring for the Blue Devils with 8 points 6 of those were off or 3-point shots. Each Duke big man that played in the first half scored 6 points (Lively, Young & Filipowski).

Duke’s defense limited Boston College to just .273 overall from the field in the first half, to take a 35-23 lead into the locker room. The second half saw Duke’s offense come alive. The Blue Devils shot a blistering 58.3% from the field and 50% from 3 in the second and went 7-7 from the free throw line. Mark Mitchell who led the way for the Blue Devils in scoring went on a personal 8-2 run in the span of 90 seconds in the second half hitting back to back threes followed by a dunk to give Duke a 21 point lead. The eagles got no closer than 10 at 47-37 in the second half as Duke won its ninth straight ACC opener. Nine different Blue Devils scored in the game and graduate Jacob Grandison was the third in double figures with 10 points, six rebounds and three assists off the bench, Defensively, Duke held its sixth opponent in 10 games this season to less than 60 points.

Upon seeing this team for the first time live and up close I can say that they are a lot more physical than I thought. Not sure if that’s been the case all year because BC plays a physical brand of basketball. In any event, they responded and were physical as well. Also Kyle Filipowski doesn’t carry himself like a freshman, he really handles himself well down low and on the perimeter and seems to have no issue banging in the paint with older players – he gives just as well as he gets.

Ryan Young, may not be the flashiest player on this Duke squad but what he gives this team is invaluable. Young is consistently one of the biggest talkers when he’s in the game or on the bench, he makes sure the younger players are remembering the details, the assignments. Jon Scheyer alluded to this in his last press conference but seeing it in person was interesting. He may be one of the most important players on this team in terms of leadership, knowledge and intangibles.

“Really proud of our team. Great to get our first ACC win. Boston College, they’re still getting healthy; they’re a little beat up. Proud of the overall effort, our defense was really good. Finally, we could string some stops together, and that translated into some good offense for us. We’re still getting acclimated to playing with each other. This has been a tough stretch, a lot of games: more games than practice. We just need to keep building, quick turnaround again for Tuesday. I just want to say Jaylen Blakes, man, he’s done a big-time job for us. He’s coming in every game giving us energy. Dariq (Whitehead) did some really good things. He’s still getting back in the flow. Really each one of our guys have played, stepped up, and contributed. That’s going to be who we are all season. Happy to answer any questions, but proud of the win.”

“I think our ability to guard one-on-one allows us to stay out of rotations as much as possible. We did give up some shots and they missed some shots. We did get lucky with a couple things tonight. But, we try to mix it up. [We’re a] versatile group, incorporating full court pressure, whether it be zone or man, and using our depth is a big thing. Using our size and length protecting our rim. I thought Dereck Lively had three blocked shots, but he impacts way more than just the three blocks by just him being in the game. You can see his activity and confidence is growing each and every day.”

On his team’s different lineups and waves of scoring:

“It is great, and it’s one of the things we’ve talked about. We can come in waves and our first group started out: I thought we were okay. Then I thought, when we subbed, we got some more energy. That makes the guys, when they’re coming back in, have more energy. We have a lot of different lineups. It’s one of the things we have to continue to figure out: who plays well together. Ultimately, when you’re out there, is your group winning? We really value what we’re doing; the ability to score in different ways. We had nine guys score tonight. You’re not going to have that all the time, but with this group, I wouldn’t be surprised if that happens many more times the rest of the year.”

“We try to really mix it up in our pick and roll offense. We have some guys that really can attack downhill. Sometimes [the wing is] empty, sometimes it’s not for certain games, that’s just scouting. Jai Lucas had the scouting and did a great job with game plan. That is one of the things he talked about. Dereck is different, so our offense is going to be different when Dereck’s in the game; versus Ryan or when we’ve had Flip [Kylie Filipowski] at the five today. So, the versatility and the ability to play differently with different lineups, is an advantage and something we have to continue to evaluate, look at, and continue to improve on based on how defenses play us.”

On upcoming schedule, rest, and next Tuesday against Iowa:

“We have two games in the next week, but then we have a little bit of a break. Then we have another game, and then a break in there. I think the practice time will do us well, and also just to recover and get our bodies back a little bit. I thought I said a lot about this team, and we can’t take our foot off the gas. We need to recover today and get back to it for Tuesday.”

On playing at Madison Square Garden next Tuesday:

“It’s a special thing going up to the Garden. I’ve been there, I don’t know, 15 or 20 times — whatever it is, never as a head coach, of course – but it’s just one of those places, it has a special feeling. When you walk in the building, the bright lights, it’s a big moment. I’m just excited for our guys to be in there.”

“We knew Boston College was going to be a very physical team. They might not jump out at you on film, but they’re going to always play hard. Obviously, one of their better guards – their best player pretty much – he went out early. I don’t even know what happened to him, but he’s a helluva guard going downhill, plays defense, has great hands. We wanted to impose our will early. It got into kind of an up-and-down game, and then kind of like the last four minutes of the first half, we took the lead and kind of put our foot on their neck.”

“Just playing inside-out is a big thing for us. If our shot’s not falling, we’ve got big guys who can go to work inside – D-Live [Dereck Lively III], Ryan [Young], Flip [Kyle Filipowski], even Mark [Mitchell] and Dariq [Whitehead] will go inside a little bit. So we’ve got so many things going on inside that we can’t just rely on our jump shots. I think we did that tonight. We’re still trying to figure out our team.”

On the most important thing for Dariq Whitehead’s continued improvement after coming back from an injury:

“Just him ripping to the basket, being explosive, trying to get fouled, and just not relying on his jumper. Using his body, playing defense, being active, and talking too. The biggest thing for him is just his confidence. His confidence has to keep going up. He can’t be overthinking anything out there. He’s just got to play his game. I think he’ll be fine. He hasn’t got his rhythm going, so it’s kind of natural to think about, ‘I need to do this or do what Coach [Jon Scheyer] is saying.’ Just play out there – that’s the biggest thing.”

When asked to evaluate this Duke team at this point in the season:

“I think we’re really getting there. We’ve got a lot of young guys and we’re transforming. This November we went 7-2, so you can’t complain about that. We’ve got a lot of young guys learning. I think [the important things are] just taking it game after game, don’t look ahead, don’t look at what happened in the past, stay in the present and stay hungry.”

On his strong performance tonight:

“I think I was just thinking a little too much early [in the season], just not playing the way I could. I just tried to keep playing hard and do what I can to help the team win. Eventually my offense came to me, and I got going on the defensive end a little bit, got a block, got a couple of stops, and I think that just fueled me to play offense.”

When asked where he thinks he can contribute the most to this Duke team:

“Just being a versatile weapon. On defense, I guard one through four, and sometimes I’ll switch onto the five. I think just being a defensive stopper, just trying to stop the prominent wing guys that we’re going to be playing.”

When asked what has been the most challenging elements of the transition from high school to college basketball:

“Maybe the hardest thing is teams scout you to know what you’re going to do, but I played in a pretty hard high school conference, so they did that too. Just learning for all of us to play together, as we get going, I think we have a lot of pieces, just figuring out what works. Every game might not be your game and that’s something new for all of us – we were all the stars where we come from – so just figuring out how to play together and play other great guys.”