By Brian HoraceAugust 24, 2014No Comments 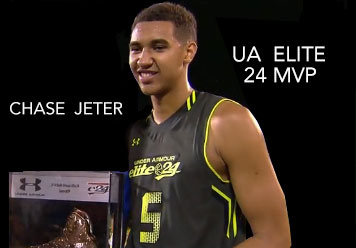 Chase Jeter showed why in the UA Elite 24 he will be a force to reckon with both in his final year at Bishop Gorman and once he steps foot in Cameron Indoor Stadium. Chase was extremely effective on the boards a stat that does get lost in all the dunks and crossovers. Chase is the ultimate opportunist and in a game where the guards are looking to score more than dish Jeter was able to use his skill as a rebounder to make his own scoring chances. Jeter finished the game with a double-double scoring 17 and pulling down 15 rebounds for the