By Brian HoraceSeptember 30, 2014No Comments 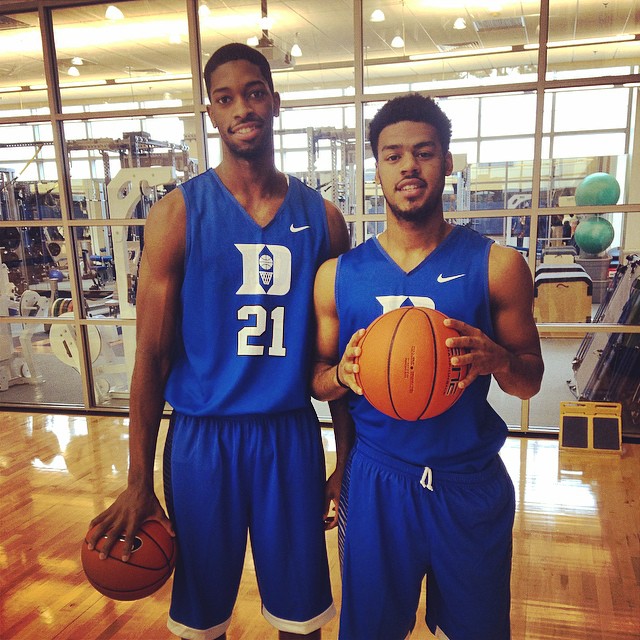 “As a team and as a staff, we could not be happier to have Quinn [Cook] and Amile [Jefferson] as our co-captains,” said Krzyzewski. “They’re two veterans, returning starters. They know us, they know what we want to accomplish and their personalities just fit in so perfectly with the development of teamwork on our team. We’re very excited about having them as captains.”

Cook, a third team All-ACC selection in 2013, enters the year averaging 9.4 points, 2.4 rebounds and 3.9 assists per game for his career. The Washington, D.C., native is 27 points shy of becoming the 64th player in Duke history to score 1,000 career points. Last season, Cook averaged 11.6 points and 4.4 assists per game while making a career-best 65 three-point field goals.

“The first word that comes to mind is – blessing,” said Cook of being named a team captain. “It’s an honor to have that title. It means you have earned the respect of the staff and your teammates. There’s been a lot of great players who have had that title here and they have done some tremendous things. I’ve been fortunate to be on some teams where I have had great captains, so I want to set the example for the younger guys and the whole team. I want to leave my mark as being another great captain here at Duke.”

Jefferson is one of the leading returning rebounders in the ACC after corralling 6.9 rebounds per game a year ago. He also averaged 6.5 points per game on an efficient 64.4 percent (94-of-146) shooting from the field.

“It’s the ultimate honor to be named a team captain,” said Jefferson “To think about guys like [Shane] Battier and [Jon] Scheyer, those captains who led the team — Mason [Plumlee], Ryan [Kelly]. Just guys who knew how to set the ship and how to make the team go the way they wanted it to go. So for me and Quinn [Cook], it’s a big honor and it’s time for us to be leaders. It’s time for us to demonstrate our leadership on and off the court. It’s something that I’m going to cherish forever.”

Duke will play the annual Blue-White Scrimmage Saturday, Oct. 25 as part of Countdown to Craziness as well as exhibition contests against Livingstone (Nov. 4) and Central Missouri (Nov. 8) before opening the season Nov. 14 at home against Presbyterian in the opening round of the Coaches vs. Cancer Classic.