Devil of the Day vs the Indiana Hoosiers: Tre Jones

By Brian HoraceNovember 29, 2018No Comments 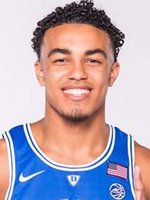 It’s been a while since Coach K has had a prototypical point guard to give the keys to. It’s indeed been a mixed bag of guys who either weren’t quite ready for prime time or just not a good fit for the other personnel. Tre Jones 7 games into his Duke career may be the answer to take this Duke team to that next level. Jones has played superbly up to this point and has conjured memories for most of his brother Tyus Jones. It’s not that Tre and Tyus play the game in the same way but both players play the game with a very high level of understanding and a quiet confidence. Even their numbers are similar after the same number of games at Duke.

Tre has been able to come in and do exactly what K and Company have asked of him from being a facilitator (averaging 6 assists to only 1 turnover per game) or putting the ball in the basket (10.3 points per game). Tre has improved his scoring as the year has progressed and seems to be finding his spots on the floor after only averaging 3 points per game in his first 3 games, he’s averaging 14 in his last 4 games.

Brian HoraceJanuary 5, 2022
Devil of the Day