Devil of the Day vs the Texas Tech Red Raiders: Tre Jones

By Brian HoraceDecember 21, 2018No Comments 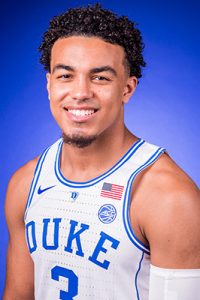 Tre Jones may not have the vertical of Zion or be wired to score like R.J. Barrett, he doesn’t have the pretty shot of Cam Reddish but what Jones has is exactly what this Duke team needs. Jones has something that Coach Mike Krzyzewski hasn’t had in ages – a true defensive minded player. Sure Duke has had good defenders come through but to have a defender at the point of attack, a player that has the ability to kill the head of the snake an on-ball defender that takes out the other teams point guard is an immeasurably important piece of this Duke team.

There are players that don’t play defense, there are willing defenders but then are players like Tre Jones that love to defend. When you love it, you take pride in it and unlike some guards that have that defensive mindset Jones is still a guard that makes good decisions on the offensive end.

Against Texas Tech Jones exerted his will defensively. His 6 steals and 5 assists were not just an impressive stats but lead directly to Duke’s ability to keep the game with the Red Raiders close and within striking distance. The Apple Valley product also contributed 13 big points for a Duke team that was struggling to put the ball in the basket.

I’ve struggled to find a less cliche analogy to apply to what Tre Jones brings to this team but I like the analogy of a band.
Tre may not be the lead singer or even lead guitar but more like a drummer. Someone who keeps the tempo steady and was the other members go off and do their thing, Jones maintains the rhythm for the entire group. If things get sped up or too slow, they look to Jones to rein things in and correct the pace.

Tre Jones, in his first game in the Garden is the Devil of the Day.

Brian HoraceJanuary 5, 2022
Devil of the Day