Man, am I the only one who is happy Duke Basketball is back?? I think not. Duke as expected dispatched of Florida Southern 112-68.

I had to watch this game after the fact as I had somewhere to be but sometimes it aids in an analysis – well analysis wise it’s definitely hard to gauge too much about a team by an exhibition game but for the sake of this post I’ll continue anyway. Duke played fairly well I’d say – especially when you take into account that this Florida Southern team was the Division II champion. They came in and it didn’t feel like they thought they were an underdog which is exactly what you want. You don’t schedule a team like this simply because you need someone to play, you schedule it with March in mind. Duke will face teams like this, conference champions or teams that are coming in on a high. The Moccasins of Florida Southern were a good test. They were able to capitalize on the youth of the Blue Devils at times and provided a plethora of teachable moments for this Duke team.

Duke started the game with a pretty interesting lineup but one I think we should get used to seeing in the early going:

By no means is that an indictment of any player that didn’t start but it seems to me this was one way to show some of the new additions sort of how things are done. Letting the elder statesmen set the pace is something that Coach K has lived by for quite a long time. I believe it was the right move to get the younger players some time to get acclimated to the speed of the game and the expectations.

Duke came out and looked sharp, the new look devils went on a game starting 10 – 0 run. I don’t see much point in recapping the exact happenings of this game but what I will do is talk about trends and the things that I did notice.

Again tempering enthusiasm in this early contest but those that predicted that Duke could only score from the wing seem to be have proven wrong. Duke was able to get 14 from Marshall Plumlee and 13 from Amile Jefferson in the paint, both played much more aggressively that Duke fans have seen them in the past – both looking for their shot. One play in particular that I found interesting from Marshall Plumlee was off of an offensive rebound. Last year Plumlee would need to gather himself, power dribble then go up for the shot but  in this first game of the new season Marshall gathers an offensive rebound and doesn’t dribble, just goes up strong that’s a senior move.  Its hard to say whether the Plumlee we saw against Florida Southern is a one off or a player coming into his own but if Duke can get 8-10 points on the regular from Marshall that bodes well.

Grayson Allen scored 9 in this contest but seemed to be pressing a bit. The sophomore guard shot 3-9 for 9 points. Several times Allen tried to force the issue driving the ball into the paint and seemed visibly upset when contact didn’t draw a whistle from the refs. When Grayson worked on the wing in the flow of the offense shots seem to go his way.

As expected the upperclassmen and remaining players from last year were clearly talking and coaching up the freshmen on the floor and they seemed to respond well. There were several eye-opening plays from the freshmen. Each showed some of what made them sought after recruits. Luke Kennard, after some initial nervousness, showed a great touch from the field to the tune of 14 points. Kennard was able to put the ball in the basket from every conceivable area on the court. Chase Jeter played only 12 minutes but made the most of his time scoring 7 points including a put back slam, Chase also grabbed 5 rebounds.

Brandon Ingram showed the dynamic nature of his game, scoring 16 points and a willingness to be as aggressive as an upperclassmen going to the rim. Ingram didn’t make any of the 4 three-pointers he took but had some great drives to the basket and was able to draw 11 free throw attempts – knocking down 8. Ingram also grabbed 6 rebounds in the game, defensively Ingram is a work in progress as all freshmen are, seemed to struggle a bit in knowing where to be in help situations. As far as raw materials go Ingram has great tools to use on defense – he is quick and long and when he is in his stance it resembles a spider – he can with a little more experience make it very tough on the perimeter for offensive players. He will still need to get stronger to avoid being pushed off the block.

Despite not starting, Derryck Thornton found his grove once he got going ,scoring in bunches. The freshman point guard is quick, like real quick. He scored 22 points to lead all scores and shot a hot 4-7 from beyond the arc. It will be interesting to see if Thornton can get his assist numbers a little higher but in this run and gun game it was appropriate for the freshman to call his own number on several occasions.

If Duke can consistently get this sort of balance on the offensive end they can be a force. The game did, however, expose some holes on the defensive end that the coaching staff will have to shore up. 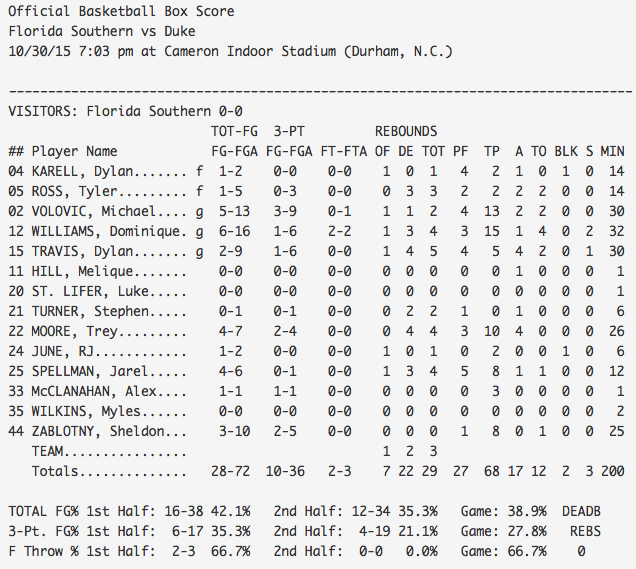