By Brian HoraceJanuary 8, 2015No Comments

Duke escapes with a victory against a tough Wake Forest team 73-65 despite doing everything in its power to try to lose this game. It’s hard to call a game that you win against a tough opponent a bad game but well Duke did to play up to potential in this one and it was plain to see. Credit to Wake Forest they exposed Duke on both ends of the floor and had enough fire power to take Duke to the brink before finally relenting on a couple of costly turnovers near the end of the game. Duke converted on those turnovers and scored on 8 straight possessions to close this one out – it was not easy.

Duke began the game in a 6 to 0 hole and was continually sloppy and lazy with the ball. Duke turned the ball over 10 times in the first half but still managed to keep a 5 point lead at the half. Wake did not convert those turnovers into points to a degree that helped them enough to secure a lead. Duke also struggled with transition defense, Wake continually ran and had a 12 to 2 advantage infest break points in the first half.

Wake shut down Duke big man Jahlil Okafor in the first half, the big man had 4 points but also pulled down 9 boards in the first half alone. The double teams came early and often and confused and befuddled the freshman who also committed 3 turnovers in the first stanza as well. Okafor would finish the game with a double-double 12 points and 11 boards in the win but near the end Coach K would have to sub the big man out in favor of Amile Jefferson for defensive purposes as Devin Thomas would have his away against Jahlil and the Duke defense. Thomas scored 24 and shot 60%, Duke could do nothing to stop him. Thomas played like an All-ACC caliber forward and did it with complete ease.

Justise Winslow kept Duke in this game in the first half and on into the second with his outside shooting, his tough drives to the basket and his fire and fervor. Winslow scored a career high 20 points in the contest also pulling down 7 rebounds. When it wasn’t Winslow scoring Duke would get big shots and big minutes from junior Rasheed Sulaimon. Sulaimon went 4 for 8 and scored 10 points in the game in his 22 minutes of action, hitting on big shot after big shot.

Duke would eventually lost the lead late against Wake but never seemed to get too rattled, they went on a run and eventually would build a 10 point lead and just out-muscle Wake with the help of freshman Tyus Jones and senior leader Quinn Cook. Jones would score 8 points in the game none bigger than his 3 point play in the waning minutes of the game, and Cook was solid. His 12 points were huge in this game 9 of them were when Duke needed them as time ticked away in the second half.

The biggest shot of the game came from sophomore guard Matt Jones who hit a 3 pointer with 2 and a half minutes left in the game to give Duke a little breathing room in the game at 64-59. Duke was able to take control after that bucket. Matt Jones would score 5 for the game, all in the second half.

To their credit Duke did shore up the turnover situation only turning it over 4 times in the second half, but still lost the turnover battle 14 to 11 to Wake. Duke did a good job the boards winning 39-31 and shot well from beyond the arc at 44.4% for the game, that along with rebounding may have been the difference. Wake went 2 for 13 from 3 although the 2 they did hit came in the second half and were big shots.

Duke going forward has to work on several key areas but it all starts with intensity. This team was too relaxed, too nonchalant. There were lazy passes, unforced errors a plenty. Credit to Danny Manning and his squad for not going away and taking the fight to Duke but if Duke had showed up to play with the intensity that we are used to seeing this game might have been over in the first 15 minutes.

There was a lot not to like but Duke does pass the test in its first away conference game. 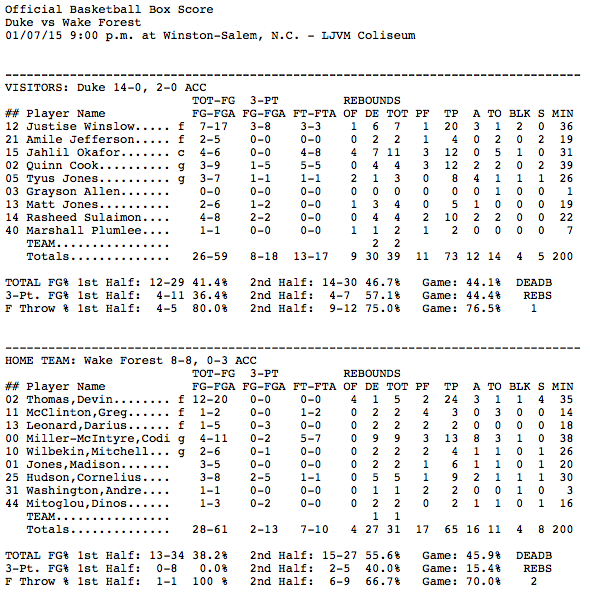