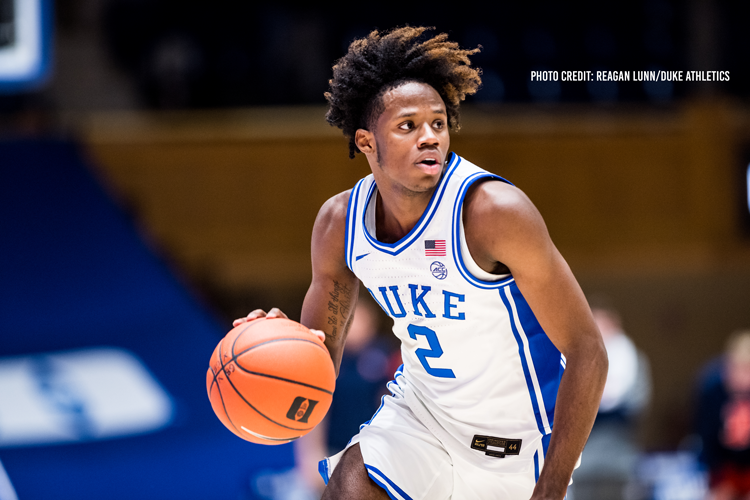 By Brian HoraceDecember 9, 2020No Comments 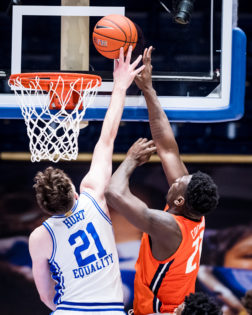 Matthew Hurt scored 19 points to lead the Blue Devils in scoring Tuesday night, unfortunately for the Blue Devils it was not enough to save them against a very good Illinois team. The Blue Devils shot just 40 percent and made only 5 of 22 3-pointers.

Illinois was paced by guard Ayo Dosunmu, who scored 18 points and Kofi Cockburn added 13 who scored 13. The sixth-ranked Illini shot a scorching 58 percent from the field and took the game to the Blue Devils beating them Duke 83-68 in the ACC/Big Ten Challenge.

Illinois jumped on Duke from the start with a 14-2 to begin the game – the Blue Devils wouldn’t get much closer. The loss is Duke’s second versus a top 10 team dropping them down to 2-2 on the season.

Anyone with eyes sees that Duke is struggling offensively, it’s been and will be a recurring theme as this team carries on past this game. Basketball always provides 2 schools of thought. There are the fans who expect instant domination, and those that understand that things take time. Coach K mentioned that this is a talented team but it’s not a developed team. It’s impossible to truly know the ceiling or the floor of any team until the games are played. This game could have very easily been a 20-30 point loss with how good Illinois is but there are signs of life in Durham and it comes in the form of effort. The effort is there, the results haven’t been but at some point I have to believe they will break through. I for one do not prescribe to twitter logic as I’ve been watching Duke and basketball far too long to be deflated as a fan or overly critical as an analyst with how the first 4 games of the season go – especially a season where teams of youth – like Duke, Kentucky and UNC are at a distinct disadvantage. It’s not an excuse but a mitigating factor in how things are in this unique season. I do believe all three of those teams will get better, it just may take some time.

Duke specifically hasn’t played badly on defense despite struggling at the other end of the floor. A lot of young teams let one effect the other. As guys find their way and find their roles I would expect more of the extra pass, more shot confidence and hopefully a better result. The other issue Duke is contending with is their veteran play. Matthew Hurt and Jordan Goldwire are playing fairly well but Duke needs more, anything really, from Joey Baker and Wendell Moore Jr., both seem to be struggling mightily and both were expected to be important parts of this year’s team. It may take sets and more concerted efforts in the scheme of Duke’s offense to get one or both going and I will look for that going forward.

“Happy Wednesday. Hopefully Wednesday is better than Tuesday. We got beat by a team that is better than we are, and older, more mature. They kind of imposed their will on us. We are not as good as they are. Therefore, you have to be really smart and hit shots. We are not there yet. We have a lot to learn. I think we’re playing hard on the defensive end. We did some things defensively to put us in a position to put some game pressure on them but they always answered. They’re good. Brad [Underwood] does a great job with his team. They have a lot of weapons. They’re older, they’re a good team. They were last year and they are right now. We are just an average team that is very young and has to get better. On the offensive end, we are not confident. For whatever reason it is, we are not confident on that end of the court. I have to do things to make sure they get that confidence. So, a lot of work to do. It’s a learning experience. Especially these two games, Michigan State and Illinois, you’re playing teams that play at a really high level. A lot of these kids, they haven’t been in this before. Our veterans have only been able to do so much to help us. Matt [Hurt] and J-Gold [Jordan Goldwire] are playing well obviously. Wendell [Moore] is really struggling. God bless him. He’s just really struggling. The more veterans you have, it can help the younger guys. When a veteran is struggling like that, one, I feel badly for him. I know it hurts him like crazy. Usually, a veteran can help another kid and be a source of strength. Some of these young guys are out there a little bit alone. We are going to just keep working and getting better. They’re really good. Brad does a great job with their team. They have two big guys who are good. Then they have a bevy of perimeter players who can play. They can shoot.”

“We are always looking at different things. Whatever you see in the offseason, if you don’t have a veteran team where you have a bunch of key guys coming back, you are experimenting. You don’t know for sure what the offense will look like. We thought we could be more of an up-tempo, penetrate, kick, ball screen and be free shooters. Obviously that’s not going on. We started that way and we haven’t had a good perimeter shooting game yet. Against Bellarmine, a good team, Matt was 6-8 and Jamyn [Brakefield] was 4-4 from three. But, that’s not the perimeter. We have to keep looking.”

“Well, there is a big difference between Coppin State and Michigan State and Illinois. You should notice that. It’s going to be easier against Coppin State. Sometimes when you have a game like that, you can think that other games will be not as physical. These games are really physical, so you have to play through contact. Not fouls, contact. That is a learned experience and Jalen is learning that right now. The other thing is when people play off of him right away, you don’t have to bite on that all the time. You can be a screener and get that shot later and get more involved. Again, he’s trying. The first three plays of the second half. He has a chance to get seven points and we got none. There will be games hopefully soon that when that happens he will get seven points. That didn’t happen tonight. I’m not blaming him. That’s part of the problem, playing through physicality. Same thing with DJ [Steward]. They were very physical with him early. He weighs 170 pounds. He’s got a good heart, but you’ve got to get adjusted to that. It’s a learned experience. These guys already know how to play at this level, Illinois does. We have to learn how to play at this level.

“This is not inherited wealth where we have what we have had. What we have had was really damn good and it has produced a lot of championship teams. We do not have that. You have to earn that with a new group, and this group is one of the youngest we have had. It creates a new dynamic that is difficult. Also, when teams play against us, for them to come into Cameron, not just to play Duke, but when they come into Cameron, with fans or not, they’re ready to play. You’re not going to get anyone looking ahead. Our guys, they’ve not experienced that yet. They’re experiencing that right now. Hopefully, that makes us tougher and better.”

“We’re going to continue to work on our offense, whether it’s motion offense or set plays. But I think [we have to] just keep attacking the rim, just find the open guy, and just calling people off. If you have an open shot, call for it and shoot it with confidence.”

When asked what the message from the coaching staff was when Duke fell behind early in the game:

“Just keep moving on offense, get good shots, and the shots will fall. We’re not shooting well right now but we’re all going to get in the gym and keep working day-by-day.”

On the play of Illinois tonight:

“They came out with confidence. They hit a couple of threes and that just kind of helped them throughout the game. They were shooting with confidence and they made some big plays, go give credit to them.”

“We knew they were going to be physical coming in. Coach [Mike Krzyzewsk] has always been preaching that they’re an older team, they’re skilled, they’re physical. We’ve got to live up to the challenge. Obviously, today we didn’t, but we’re going to continue to get better as the season goes on. We’ll be good.”

“We just didn’t play a full 40 minutes as a whole team. I know I had some spurts where I kind of let down, and some of the other guys did but we’re going to keep getting better. It’s early in the season.”

On what Duke can take away from a game like this:

“It’s definitely a big learning tool for me and the team. [Illinois] is at Top 10 team that we’ll have to beat in the [NCAA] Tournament. For me, this is my best game so just have to keep stacking them and be consistent. [Illinois junior Ayo Dosunmu] is a good guard. Give credit to him. And his teammates, they’re good players. They’re going to make plays – we know they’re going to make plays. But we’ve just got to lock in for 40 minutes, every game. Just lock in for 40 minutes and play Duke basketball.”

When asked what led to his noticeably improved performance tonight:

“Just come out and play with confidence. I feel like my first three games, I was kind of feeling it out and kind of deferring to the older guys, but today I had to be in attack mode and just do that for the rest of the season.”

When asked if he felt like he was getting more comfortable with the physicality of the college game: