By Brian HoraceDecember 30, 2014No Comments

I couldn’t watch this game live so I sort of peaked on twitter off and on to get a feel for how Duke was playing and man you would think the sky was falling in Durham. Granted I understand social media is a huge “heap-on” by which I mean that if something happens you are going to get 100 different reactions to it and thus making it probably way more significant an event than it actually was.

I would say that the demise of Duke’s defense has been greatly exaggerated. I mean it wasn’t GREAT, but it was serviceable and after a pretty big lay-off I wouldn’t go running to the hills in fear. Toledo shot 47.5% from the field, maybe that is a little high but it’s not astronomical either. Duke did do a poor job of defending the paint and allowed too much penetration by Toldeo guards notably Julius “Juice” Brown who put 19 on Duke on 9-19 from the field. Duke did lack a true rim protector in this game and that coupled with the amount of penetration Toledo was able to achieve made this game pretty darn close, closer than some would imagine. But this is the type of game that Duke maybe should struggle with a bit. Toledo was an excellent choice for Duke to play. A veteran team. A team that has been in big games. A team where Duke would have to find ways to win, where they would have to do what they do best and consistently in order to get a victory. When in doubt Duke made the plays that mattered against a very tough and gritty team.

A steady helping of Jahlil Okafor is exactly what the doctor ordered every time Toledo made a run on this game and Okafor channelled that into a career high of 27 points, 8 rebounds a block and an assist. Okafor showed why, once again, why people are so high on his skill set and it makes me wish that Duke could have him for a second year, not just because I’m a huge Duke fan but to see his progression as a player at a level where the game is still very pretty and pure. Okafor did his work on 12-15 shooting and true to form shot 50% from the foul line, one of his only real weaknesses as a player so far.

Duke also got a huge night from senior guard Quinn Cook, who when Duke needed leadership stepped up and delivered. Cook’s off-season work and maturation process is showing and paying dividends for Duke thus far this year. Cook’s 20 points came on 6 of 12 shooting and the senior did his damage from all over the floor, scoring on contested layups, long range bombs, jump hooks and mid-range floaters. Cook seemed to take on the dual role of hype man and main act as he lauded teammates on hustle plays but also making huge plays for Duke when necessary.

Tyus Jones was his usual efficient, calculating self. Never getting too high or low and always making the right decision. Jones is the calm to Quinn Cooks storm with 15 points of his own, Jones also went 9 of 9 from the free throw line and had 8 assists to only 1 turnover and 2 steals.

Important for Duke in this game were bench points, Duke would not score any against Uconn in their last outing but got 13 in this game with junior guard Rasheed Sulaimon leading the way with 7 points. Sulaimon was much more aggressive in this game which could be a very big thing for Duke going forward.

Clearly there are many items for Duke to work on for it’s next outing, obviously defense is a huge one for Duke go over in the film room. Duke has to do a much better job staying in front of guards and really getting in better position on the defensive glass.

The points on the paint numbers bear that out with Duke only holding a 2 point advantage despite the work that Jahlil Okafor did in the middle. Duke also has to be stronger with the ball, points off of turnovers is a stat that Duke usually dominates but only held a 2 point advantage in against Toledo. 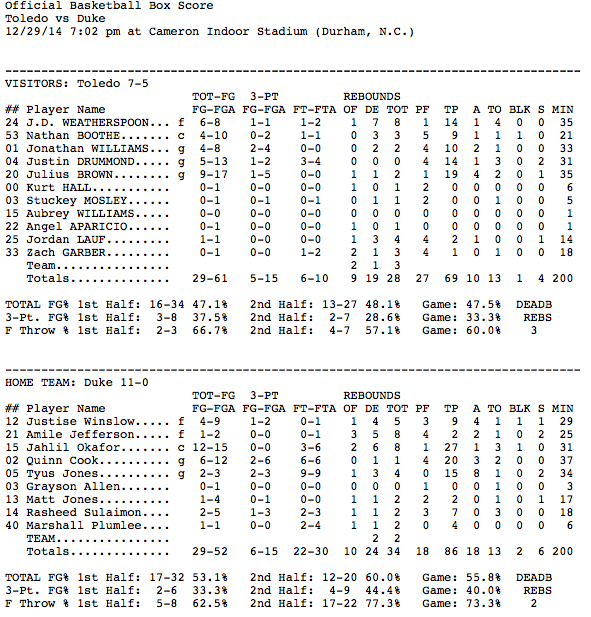