By Brian HoraceJanuary 14, 2014No Comments

Wow! What an ending. When the buzzer finally sounded and Duke won at home against Virginia 69-65 my heart was beating pretty heavily. You clearly cannot let your fan-guard down with this Duke team but a win is a win and I’ll take it. It was needed and possibly needed in the fashion it was acquired.

With Duke down 1 point, Rodney Hood took a shot, it air-balled. Luckily for Duke Amile Jefferson stepped up in the rebounding department again for Duke (15 for the game) and was able to gather the rebound and send it to a waiting Rasheed Sulaimon camped out in the corner. Rasheed would drain the 3 to give Duke the lead for good, and Duke Nation breathed a sigh of relief.

Duke won in dramatic fashion but defensive lapses made the game a lot closer than it needed to be, Duke had a stout defensive effort for the most of  game but in the waning minutes allowed UVA to go on a run to put the outcome in question. I don’t want to talk about what Duke did wrong, lets talk about what they did right. Yes they gave up the lead and made things more difficult but they also fought back, they didn’t hang their heads, they fought. That is exactly what has been missing from this team. People have been, Coach K included, wanting to see fight and toughness, Duke showed that it has both, it just needs to apply it on the road, and consistently. This game was in Cameron and Duke needs the exact same level of effort, more so in fact, on the road. Were there still defensive lapses? You betcha. Did Duke get out-rebounded? They most certainly did. It was less about numbers for Duke it was about effort and process and hopefully this was the step they need going forward.

Rasheed Sulaimon and Amile Jefferson were studs in this game. Sulaimon, on the offensive end gave Duke 21 points on 7 of 11 shooting, he also had 2 steals and 2 assists while not starting. Sulaimon would hit the go ahead three after his foul allowed UVA to get the lead late in the first half. Redemption.

Amile Jefferson had a monster game on the boards with 15, 2 of which were crucial in the second half. Jefferson, who Coach K called an Animal in this game, grabbed the rebound from Hoods miss in the final seconds and also on UVA’s subsequent possession he intercepted the pass to seal the win for Duke.

Jabari Parker again struggled in the win going 3-11 and 2 of 7 from three-point range. Parker also only contributed 3 rebounds in 26 minutes for Duke and scored 8 points. Rodney Hood was 5-12 in the game, but managed to give Duke 14 points and 2 assists, not Hoods best performance but he hit big shots at big times, when UVA made a defensive mistake it was Hood who would make them pay.

The surprises for Duke besides the much stouter defensive effort was the wholesale substitutions used by Coach K, everyone played and contributed and it seemed to keep guys fresh and UVA a little off-balance. The other surprise was freshman Matt Jones getting the start to spur the defensive effort for Duke. Jones didn’t contribute much in the way of statistics but he brought an attitude and presence on defense that Duke needed. Congrats to Matt on his first start at Duke. 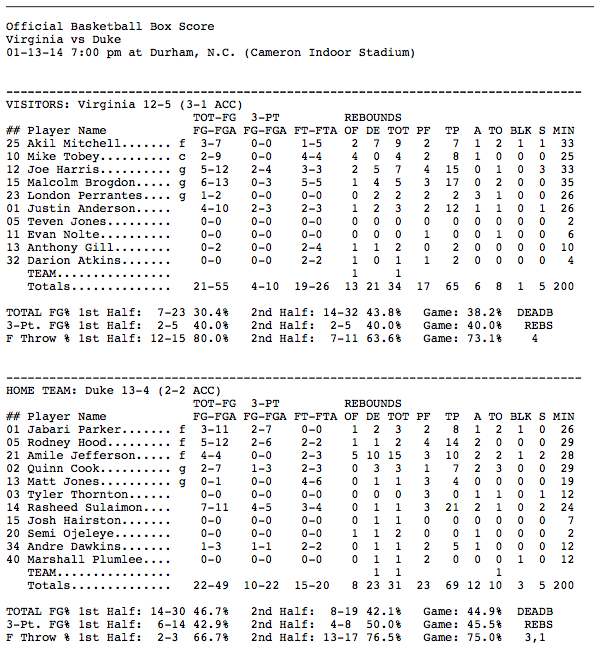