By Brian HoraceOctober 9, 2014No Comments 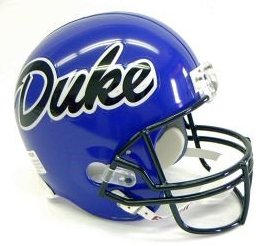 After a much-needed Bye Week, Duke looks ahead to playing at Georgia Tech. Duke will attempt to hand Georgia Tech it’s first loss of the season and end the Blue Devils’ 10-game losing streak to its Coastal Division rival.

Georgia Tech is coming off an impressive 28-17 win over Miami in which they rushed for 318 yards and held onto the ball for 41 minutes, compared to Miami’s 19 minutes. The read-option Georgia Tech employs may cause Duke issues with Duke giving up an average of 212 rushing yards a game in their last three games.

On top of their dynamic rushing game, Georgia Tech also has a formidable deep threat in DeAndre Smelter, who although only having 14 receptions, has racked up 339 total receiving yards and four touchdowns.

Duke, on the other hand, is coming off of a Bye Week. After a disappointing 22-10 loss at Miami, Duke will look to improve its run defense. Against Miami, the Blue Devils allowed the Hurricanes to run for 203 yards. If this is the case against Georgia Tech, the Time of Possession column will be lopsided in Georgia Tech’s favor.

On offense, Duke will also look to enforce their running game. Powered by 4 backs in Shaquille Powell, Josh Snead, Freshman Shaun Wilson, and Joseph Ajeibe, the Blue Devils average 225.8 rushing yards a game. This combined with the threat of All-ACC receiver Jamison Crowder will help to equalize the Time of Possession between Duke and Georgia Tech.

It’s also a must for Duke to limit their turnovers and penalties. The eight penalties for 50 yards including three botched snaps doomed the Blue Devils against Miami as well as the three turnovers committed. If this is achieved, Duke has a good chance of pulling off the upset.

Conversely, if Georgia Tech can create turnovers and sustain long drives like they are accustomed to doing, they will likely repeat their performance last year against Duke and again come away with win.