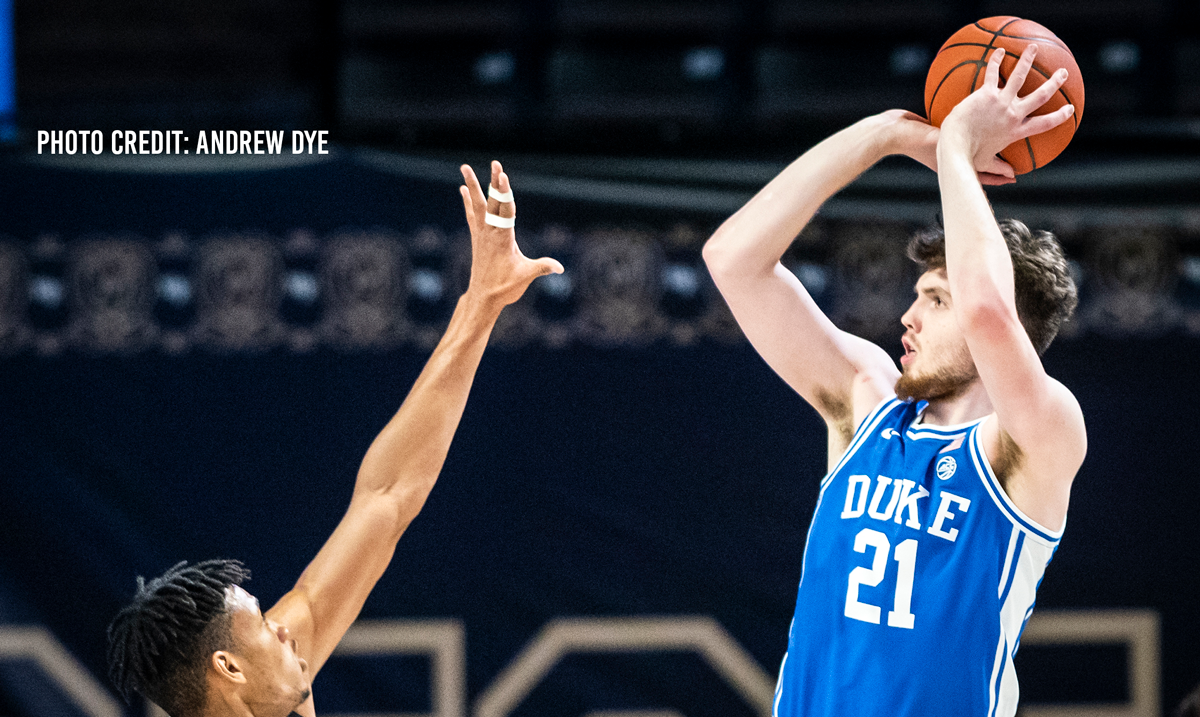 Duke Shuts Out the Noise and Shuts Down Wake Forest 84-60; Matthew Hurt goes for 22

By Brian HoraceFebruary 18, 2021No Comments

The Blue Devils played what could be their best offensive game of the season – not in terms of points but in terms of efficiency. The Blue Devils shot the ball at a 54% clip – 8% more than their average and they also shot the 3-ball at 44% which is nearly 10% above their average for the season. Most importantly for the Blue Devils is that they gave themselves more opportunities to score by not turning the ball over at their usual double-figure clip. Duke ended the night with only 6 turnovers which only cost them 2 points, while dishing 17 assists on the night.

Duke has always been a team priding itself on defense leading to offense and the Blue Devils had been a porous defense – especially on ball screen defense. Coach K alluded that this coaching staff added some wrinkles in how they defend those ball screens and it paid off for Duke. Duke defended the Demon Deacons as well as they have defended anyone all season long – holding wake to under 40% shooting and under 30% from beyond the arc. Duke defending better gave them a much larger margin for error but with Dukes ability to move the ball around effectively they didn’t much need that margin. A large part of Duke’s defense has been Mark Williams, his presence in the paint disrupting and blocking shots has been crucial for Duke’s improvement on defense. Williams being able to stay on the floor affords Matthew Hurt the ability to not have to guard big and keeps Duke’s primary offensive weapon out of foul trouble.

Duke got a huge effort from the aforementioned sophomore Matthew Hurt who scored 26 points in his last outing, following that up with 22 points against Wake Forest on 8-9 shooting. The Blue Devils also got double figure efforts in scoring from DJ Steward who added 16 points and 3 assists, 12 points from Joey Baker who went 4-7 from beyond the arc and 11 points form Wendell Moore. Freshmen Jaemyn Brakefield who saw his minutes increase added 7 points, 5 rebounds and 4 assists.

Stats of note for Duke:

Opening Statement: “We played really well. We’ve had six straight days – the two before NC State and then [the game against] NC State – where we just had great practices and worked so hard, and then it translated to the NC State game. I gave them off Sunday. Again, we had two great days where these guys are working so hard, and then it translated tonight. My staff has done a good job. We changed our ball screen defense a week ago to better suit this team, and our kids have really done that well. Knock on wood, we can keep it going. We’re getting contributions from everybody. [Tonight was a] really good performance by our kids.”

On if the team’s offensive efficiency is a product of the players getting more comfortable with one another: “What you just said I think is part of it. They’re getting accustomed. They’ve formed a little chemistry. I think when you play that hard on the defensive end, you play better offense. You’re more physical and you run the offense harder. You can’t play that hard on defense and then not play hard on offense. From the seven to the five-minute mark, we didn’t run good offense. I think that’s the other key – they’re just playing hard and I think it’s translated. They’re sharing the ball. To have 17 assists and only six turnovers is really a good performance. I was really worried about the game because Steve [Forbes] has done such a good job with his team. They can shoot the ball and they have a movement offense, and our guys did a good job of defending them. Hopefully, we can keep that going.”

On if freshman Mark Williams’ presence on the interior helps open things up for sophomore Matthew Hurt: “I think that’s part of it. Mark’s emergence – this is what happens with good, young guys – they get better. Mark is getting better. He’s a presence. Matt has felt good with him there. Also, it’s taken some of the load off of him defensively with a big guy. He never had to guard a five today. He did a little bit, obviously, [against] NC State with their two bigs, but that helps too. I really believe how well Wendell [Moore Jr.] is playing. It doesn’t always translate into all the stats. His movement and talk – they’re just all getting a little bit more comfortable with one another. After those really tough, close losses, for these kids to have this great attitude and work ethic says something about them. Again, we’ve just got to keep it going and hopefully games can be played. It was a bad day for our conference, where you get three of the five games postponed or canceled. Hopefully, that can cut down as we get ready for the ACC Tournament.”

On the production from the players coming off the bench: “Everyone that played really helped us. Jaemyn [Brakefield] got that explosion. Actually, after that, I thought he passed up some shots that he should’ve taken. He helped us against NC State too. [Jordan] Goldwire has been a key guy, too, for us because when you can bring in a veteran who is a starter, but bring him off the bench, he’s really our best athlete on the perimeter. He’s a heck of an athlete and he’s sharing the ball. Usually for Jordan – again tonight, he [had] four assists to one turnover – his assists to turnover ratio is outstanding. Not good, it’s outstanding. When he comes in, he’s strong with the ball and he’s sharing it, and then he’s as good of a defender as we have. So, coming off the bench like that, that’s been a plus for us.”

On the team’s reaction to freshman Jalen Johnson declaring for the NBA Draft: “Our team loves Jalen. He’s a brother to these guys. For Jalen and his family, they were great – we talked. I’m a coach because of players, and these kids should have the choice to do whatever they want. We’re going to give them our guidance and talk to them about it, and then I’m 100 percent behind him. Our guys have followed up with that too. Especially with the pandemic, these guys have really gotten close. They haven’t been able to make friends anywhere else, so they’ve really developed a family atmosphere. We’re all supportive of Jalen and his family.”

On what allowed him to be so effective offensively: “It’s a lot about my teammates and my coaches. They put me in a great spot to score and get my shots, so I give all the credit to the coaching staff and my teammates because they do most of the work.”

On if having freshmen Jaemyn Brakefield and Mark Williams on the interior helped free him up on the perimeter: “Yeah. Those are two great players you just mentioned. Mark is one of the best rim protectors I’ve ever played with. Jaemyn brings energy. He carried us for a while to start the game. That’s what we’re going to see from him more. He actually got hit in the mouth yesterday, so he had a mouthguard in. He’s been playing well and I’m proud of both of them.”

On what has led to the offense playing the way it has in recent games: “Just confidence. I think everyone is getting in the gym getting extra shots up, whether that’s coming in the morning or coming late at night. I feel like if we’re all shooting with confidence, it just makes our offense better, but also to our defense. The last two games, we were pretty solid on the defensive end and that carries to offense for us. I’m just proud of my group and we’re going to keep working because we’ve got a big one on Saturday night.”

On the team’s ability to space the floor and move the ball offensively: “Everyone on this team is unselfish. Early in the season, we were really turnover-prone. The last couple practices, the last couple weeks, we’ve been hounding on the defensive end and just not turning the ball over, because if we do that, we’re going to be in good shape to win a game. I think we did that tonight and the last two games, and I think we’re going to keep playing hard and try to keep playing smart.”

On how being on the court with freshman Mark Williams helps him defensively: “He gives me a lot of confidence on the defensive end. He’s a really good shot blocker, a big presence in the paint. There were a couple times in the first half where I reached when I shouldn’t have, but I think just learning more about the game and having him out there really helps our team. He’s a difference maker and he’s only going to get better, like I said. I’m just proud of him.”

On the team’s defensive performances over the last two games: “We’ve been locked in on the defensive end in practice. I’m pretty sure that it’s been translating really well for us. We’ve really just been focused on defense, and then we knew that our offense is going to come – we have so many good scorers. We have Mark [Williams] in the paint protecting the rim, and then he’s going to get blocked shots, he’s going to score in the paint, so we’re getting a lot from everybody right now. Everyone is playing pretty good and everyone has been solid, so we’re looking forward to getting better.”

On if he has ever played with a player as offensively talented as sophomore Matthew Hurt: “No, I have never played with a scorer like this. He really doesn’t miss at all. It’s a lot of crazy shots, fadeaways – he can give it to you in a lot of different ways. It’s pretty spectacular watching him while I’m in the game. When I get back on defense, I’m like ‘Wow, no way that just went,’ but of course, I’m looking for it to go in. It’s just great to see him knocking down shots, getting our team going on the offensive end.”

On holding Wake Forest to 7-of-25 three-point shooting: “That was our focus coming in. We know they have a lot of good shooters in [Daivien] Williamson, [Jonah] Antonio and [Carter] Whitt. They’re going to make shots eventually, but we shut them down pretty much. They take about 25 three’s a game, so we held them a little bit under, but they didn’t make as many three’s as they’ve been making. I feel like we accomplished our goal of stopping them from getting too many three’s.”

On how playing with the team’s forwards changes his approach on offense and defense: “On offense, Matt [Hurt] being on the perimeter, it creates a lot of different spacing. We can get some drive and kicks. With Mark [Williams] in there, you can see him in a pick-and-roll, hit him on the drop off, alley-oop – just a lot of different things that we can give off. Defensively, we can pressure the ball harder, we can get fight over screens and even if we get beat, Mark is going to be in the paint to protect us. I feel like everything is going well.”