By Brian HoraceFebruary 9, 2015No Comments

It’s hard to get down on a team that gets a tough road win in a hostile environment, especially a team this young. Duke managed to squeeze out this win at Florida State despite giving the Seminoles every chance to win it. Duke was sloppy in the first half with 6 turnovers and shot sub-par from beyond the arc going 3 for 11. Even with being down by 8 at halftime Florida State never seemed to lose their swagger.

Duke was able to build a double-digit lead of 14 points over the Seminoles but each time Florida State fought back getting 2 huge long distance bombs from reserve guard Robbie Berwick and a career high 23 points from Devon Bookert. Duke continually victimized themselves with turnovers and inefficiency on the offensive end.

Duke did not get the bench production it needed to help pull away from the Seminoles Matt Jones who had been putting together strings of good performances had trouble in this game getting his shot to go in and ended up 0 for 5 with 2 turnovers. Duke only managed a total of  6 points from its bench with 4 from Marshall Plumlee and 2 from Grayson Allen.

Justise Winslow seem to regress a bit in this game as freshmen do, while the freshman did score in double figures with 10 points he went 1 for 6 from the field and  had 4 turnovers. Jahlil Okafor went 5 for 5 from the field for 13 points but was largely quiet in this game. He did break the Duke freshman record for most double-digit scoring games to start a campaign but was not a dominant factor in the game. This game largely belonged to the guards.

Duke got huge games from it’s back-court though, Tyus Jones poured in a double-double with 16 points and 12 assists to only one turnover, the freshman also pulled down 6 rebounds and was a perfect 2 of 2 from the foul line. Quinn Cook has emerged as the true leader on this team and carried Duke offensively with 26 points on 8 of 15 shooting and 4 of 9 from beyond the arc. Cook’s free throw shooting in the waning moments helped seal a tough win for Duke.

Duke allowed the Seminoles to pull within 1 point (70-69) but Duke would win out with free throw shooting by Quinn Cook and strategic fouling to prevent Florida State from getting off a 3 point shot.

In the end it was not the best of games for this Duke squad but as freshman go as we all know, you take the good with the bad and hope that each game, each situation is a lesson. This game saw Tyus Jones stepping up, it say Justise Winslow struggle and it saw Jahlil Okafor up and down but struggling on defense. Could just be a function of big game ups and lesser games down – part of youth and learning your way around the league. Duke was lucky to have a senior captain step up and pick up the slack.

Lauren Brownlow (whom you all should be following) put it best.

@JeffVT03 also think it’s just a product of a young, talented team. Naturally probably gets more focused for the big ones. 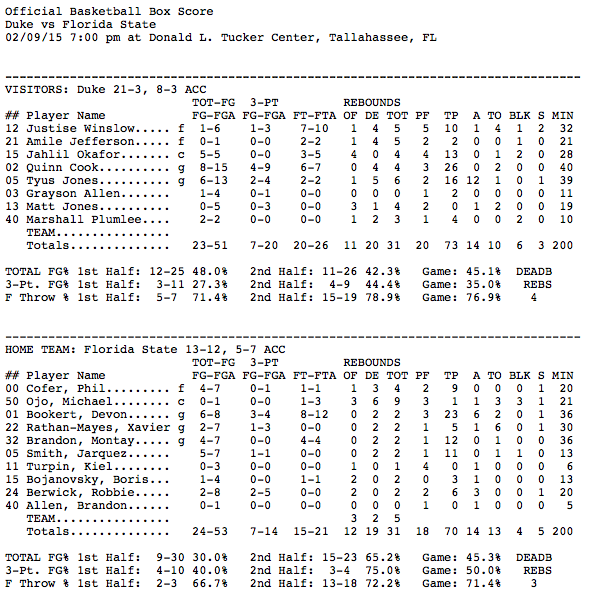