By Brian HoraceJanuary 23, 2014No Comments

The good news for Miami is that they held Duke under their season average the bad news is they could not muster up the effort to rebound or score with Duke. Duke would take this game 67 – 46 but for most of the game it was a lot closer than the score indicates. Duke had problems breaking through the Miami zone for most of the first half but kept the lead on the strength of their rebounding. Duke would pull down 19 rebounds (10 offensive) in the first half to 13 from Miami.Duke would turn those 10 offensive rebounds into an 18 to 4 advantage in second chance points. Miami would also turn the ball over twice as much as Duke in the first half and Duke would turn 8 Miami turnovers into 8 points.

The second half Duke would, minus a small second half run from the Hurricanes, control the second half. Duke dominated the boards on the strength of Jabari Parker’s 15 rebounds, a career high for the freshman. Parker would also lead Duke in scoring, putting in 17 points on 5 of 12 shooting and hitting on 7-8 from the free-throw line. Parker would also help Duke on the defensive end with 3 blocked shots.

Rodney Hood did not match Parker’s scoring output, scoring 12 on 3-8 shooting. Hood did, however, have several highlight real dunks in front of NBA royalty. Lebron James, Kobe Bryant, Dwayne Wade and Dukes own Ryan Kelly and Shane Battier were in attendance and you could sense on several instances the players tried to be more showy instead of playing fundamentally sound basketball. Conspicuously absent and quiet for the game was NFL Hall of Famer Warren Sapp who urged and exhorted the Hurricanes to slap the floor last year as they beat Duke by 27 points.

Duke also got a fantastic game from sophomore Amile Jefferson who is gaining confidence and growing as a player in front of our eyes. Amile would go 4-7 from the floor for 8 points but more importantly 7 rebounds and saved Duke possessions on several plays. Defensively, Jefferson was stout and also blocked 3 shots for Duke. Jefferson’s versatility  on defense allowed Duke to switch on defense with not drop off in defensive ability. Jefferson has solidified his position in the starting line-up making hustle plays and giving Duke a presence inside on both ends of the floor.

Quinn Cook has turned into a steadying influence for this Blue Devil team, the leader on the court for Duke, Quinn was 3-8 from the floor for 8 points and also had 4 assists and 2 turnovers. The measure of Quinn cannot be wholly measured in statline although he does have games where he is dominant, his leadership, control and decision making keeps the Duke offense in gear.

The win at Miami marks Duke’s first road victory of the season avenging last years trouncing at the hands of the Hurricanes. The important stats for Duke are that they out-rebounded the Hurricanes 42-28 and Duke would win the battle for points in the paint 26 to 16. 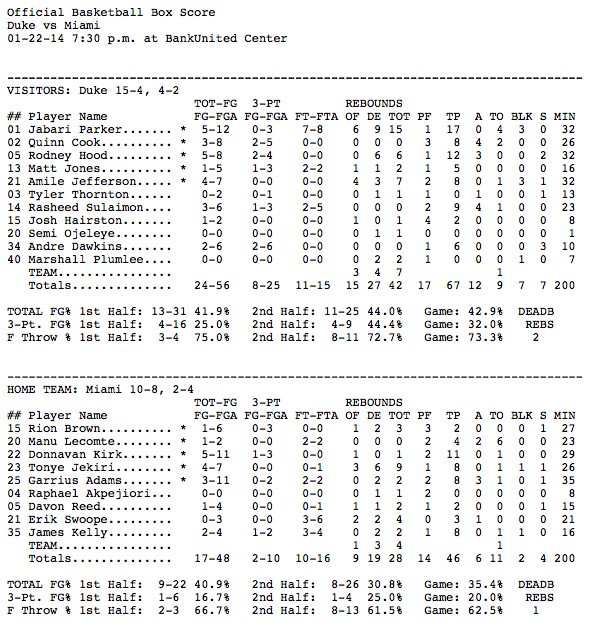