By Brian HoraceFebruary 5, 2014No Comments

Duke looked listless and out of sync for two-thirds of the first half against Wake Forest. Unfortunately for Wake Forest they could not take advantage of Duke’s shaky start and once Duke regained it’s mojo they took the game over. By halftime Duke had turned a 5 point deficit into a 46-33 lead.

Duke was paced in the first half by Rasheed Sulaimon and his 13 points and 3 assists. Sulaimon would start over the slumping Quinn Cook and would be Dukes best driver and best defender. The move seemed inevitable after Sulaimon’s stellar play in relief of Cook against Syracuse.

Duke also got 12 from Andre Dawkins on his way to 17 for the game and 10 from Jabari Parker who would have 21 for the game.
Parker played his best game in over a month for Duke, and in addition to his 21 point he would also pull down 8 rebounds. Parker utilized much better judgment in selecting shots in this game really only taking one ill-advised shot going 8 of 10 from the field.

Duke shot 46.2% from 3 in the game and 50% in the first half as it built its lead. Andre Dawkins went 4 of 7 from 3 and Rodney Hood 2 of 4, while Dukes best offense was from beyond the arc it was opened up because Duke got points in the paint (24 for the game). Sulaimon driving to the basket was a huge part of Dukes offense as was Jabari Parker getting open looks near the basket and hitting on a few short jumpers in the paint.

Duke began the game completely flat-footed and slow to react on defense but would come alive in the waning moments of the first half and on into the second. It took seeing a few shots go in for Duke to snap out of it’s first half funk. With the score tied 28-28 Duke would go on an 18 to 5 run to end the half.

Duke would extend its lead in the second half eventually beating the Demon Deacons by 20 and shaking off the emotional letdown people feared they would have.

Duke did not win the rebounding battle overall but did record 1 more offensive rebound than Wake Forest and although Duke only had one more offensive rebound they would turn that into a 17 to 12 edge in second change points. Wake Forest had a 5 point edge in points from the charity stripe but Duke would make that up and more from beyond the arc with a 36 to 15 edge there. Duke also turned Wake Forest over 19 times that lead to a 26 to 12 advantage in points off of turnovers. 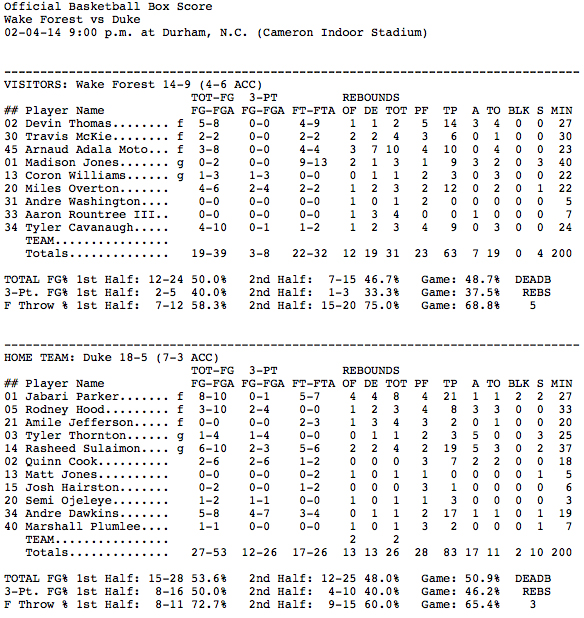