Duke in the Zone, Takes Down Louisville 63-52

By Brian HoraceJanuary 17, 2015No Comments

Not sure any team needed a win like this Duke team did and thank goodness they got it in a 63-52 win over Louisville. Duke got this win in a very non-Duke fashion, using a zone…yup, the 2-3 zone was utilized against a poor shooting Louisville team and minus some poor play in the waning moments of the game Duke played pretty well defensively.

Coach K expected Duke to have issues rebounding against the Cardinals and as predicted Duke lost the rebounding battle 38-32, but it only resulted in a 3 point advantage in second chance points. Honestly the story of this game was Louisville and their poor shooting and Duke getting a man-sized game from it’s interior players. Louisville ended the game shooting under 30% from the floor so Duke shooting just a hair under 49% seems like buckets. I had heard a lot of ire directed at junior forward Amile Jefferson and his lack of offensive production but today the lid came off the basket and Amile was Dukes leading scorer with 19 points, he also pulled down 7 boards. Amile was all over the place for Duke, clearly this was a game planning decision for Coach K and it served Duke well. Duke also got 18 from its star freshmen center. Jahlil did a masterful job of getting his teammates open looks, even though they didn’t knock them down with the proficiency that Coach K would like, they put the plan into play and hopefully going forward this will be the norm. If Duke had shot at its normal clip this game very well could have been a blowout and it still nearly was. Louisville in the last minutes of the second half started to find the holes in the Duke zone, driving and making the diagonal pass but the clock at that point was decidedly in the favor of the Blue Devils.

In addition to high praise for his big men, Coach K also praised freshman Tyus Jones for his running of the offense, Jones is a player that you truly cannot judge by his scoring numbers, but looking at his 8 assists to only 2 turnovers its easy to see is impact. Jones found cutting big men in the lane relatively easily, or at least the freshman made it look that way. Duke also got 2 huge 3 point buckets from sophomore Matt Jones, who shot the highest percentage from range for Duke going 2 for 3. Duke also managed unlike the last couple of games to get its free throw percentage up to a Duke standard number (73.9%).

It’s a very good sign that Duke was able to play the 2-3 zone effectively against a team as good as Louisville, going forward to have this in their back pocket will make this team much more versatile. Secondarily, this zone may help a shorthanded team conserve energy, having such a short bench this zone very well may be a season saver for this team. 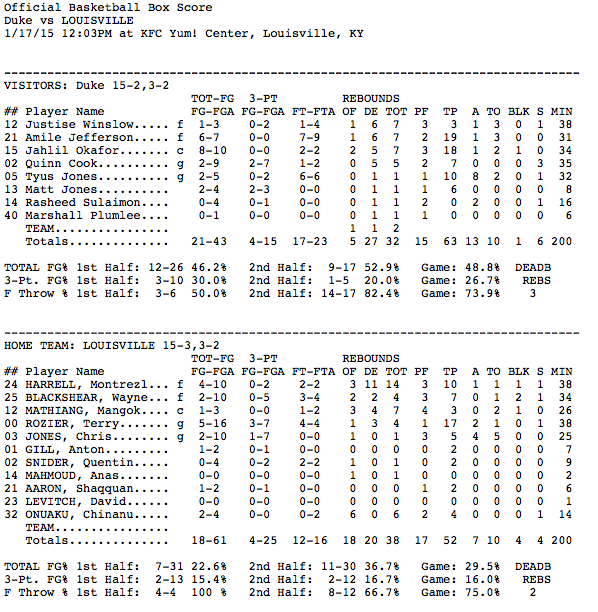