Duke’s R.J. Barrett is a Candidate for the Gatorade High School Athlete of the Year 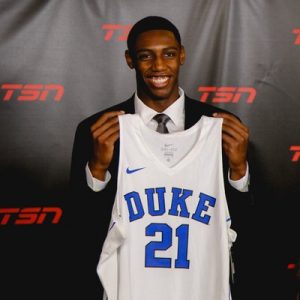 Gatorade National Basketball Player of the Year RJ Barrett will be in Hollywood for the 16th annual Gatorade High School Athlete of the Year ceremony, prior to the 2018 ESPY Awards!

The winners will be named at a dinner emceed by ESPN SportsCenter Host Sage Steele on Tuesday, July 17, in Hollywood. NBA All-Star Karl-Anthony Towns, No. 3 2018 NFL Draft pick Sam Darnold, NFL Offensive Player of the year Todd Gurley and two-time Olympic gold medalist Abby Wambach are among the pro athletes who will be attending the 16th annual Gatorade Athlete of the Year awards.

Since 1985, Gatorade has recognized state and national Players of the Year in 12 sports (six male, six female). In addition to athletic performance, Gatorade Players of the Year must excel in the classroom and demonstrate strong character. Winners are selected by a panel of nationwide sportswriters and commentators.

Some facts about R.J.: