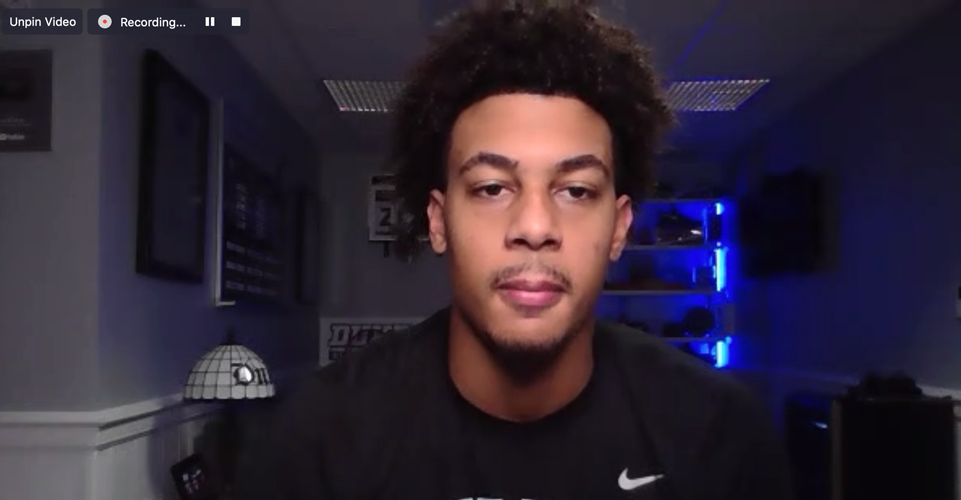 Fresh off his double figure effort in the loss to Michigan State, Jaemyn Brakefield talked about playing without fans and playing with Jalen Johnson

By Brian HoraceDecember 3, 2020No Comments

Fresh off of his first double-figure effort as a collegian freshman forward Jaemyn Brakefield spoke about his progress, playing with Jalen Johnson and playing without fans.

On what the message from the coaching staff has been after the first two games of the season:

“We’ve got to shoot and move the ball better. Just play better offensively – that’s probably the only thing that was not holding us back, but not moving us forward. That’s the only thing we’ve got to get better at.”

On what he is doing to earn more playing time:

“Just doing the things you can’t coach — playing with energy and effort and playing to win. It doesn’t matter when I get on the floor or what time. When I get on there, I’m going to play my best and play my hardest.”

On how much it helps to have played with freshman Jalen Johnson in AAU basketball:

On how difficult the schedule changes have been:

“Definitely, because we look forward to playing every game, and if there’s a setback like the first game, it doesn’t really bring us down but we were looking forward to playing the game. Who doesn’t want to play their first game? Just having to go every day and play hard, but not knowing [if] you’re going to play the next day or even have the rest of your season, it’s just hard to take in.”

On what he is working to improve in his game:

“I’m working on everything. Every part of my game, I’m working on that just to improve. One thing I bring to every game is definitely the effort and energy. On the defensive side of the ball, that’s something our trainers here have done a great job of having me do, is just getting my hips lower. Coming from high school, I wasn’t seen as a defensive player, but it’s something you’ve got to really lock in in college and that’s something I take ownership of here in college. It’s really all about the want to do it, so now I feel like I want to guard anybody in the country.”

On if he keeps in contact with former Duke player and Mississippi native Rodney Hood:

“Definitely. Both being from Mississippi, our trainers were the same trainers, so we grew up around the same people, just having the same contacts. He talked to me before I came here, just [about] how to get better and how to handle myself better, and then now that I’m at this stage, just what to do here and how to prepare myself every game.”

On his experience at Duke so far:

On how different the atmosphere is without fans and how the team can bring its own energy to the game:

“Definitely, it’s very different. Even being here last year and seeing the Cameron Crazies, it’s definitely something different. Just being a basketball player, even playing pickup, if you have a little fans on the side cheering everything on, it just helps. So, not really having fans, it can kind of be a little quiet, but that’s where bringing your own energy comes from – just having the passion to play every day and not taking things for granted.”

On if showing support from the bench has been emphasized:

“Most definitely. That’s something very important. We’ve got to be our brother’s keeper and be our own fans. When I’m not in the game, I’m getting everybody up. That’s just my job, to bring energy not [only] on the court but off the court as well, making sure my teammates are hyped.”