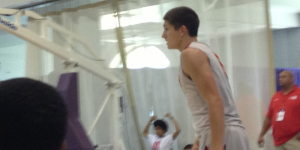 The more I watch Grayson Allen play the more I am convinced that Coach K has not inked a player like him in a very long time. Regardless of the color of his skin he is as athletic a 2 guard as I’ve seen at Duke (some seem surprised that because of his height and position he’s not a set shooter and nothing more)Â  but the best part of his game is his versatility -Â  he has the ability to knock down the jumper as well as finish at the rim. Teams that are used to Duke 2’s hovering beyond the arc are going to be blown by and embarrassed. As much as Coach K enjoys shooters, hell we all love a good shooter, the ability to be a threat no matter where you are on the court is a much more valued asset in basketball. The triple threat position is really only a threat if you have the skill set to drive, dish or shoot – Allen has all three skills. There are always things to improve upon and developing a greater in-between game I’m sure will be on that to-do list along with possibly more time at both guard positions. Duke is trying to pair Allen with a solid PG (hopefully Tyus Jones) and if they succeed they will possess the most deadly back-court in college basketball.

Recently, in the Nike Global Challenge, Allen put his skills up against the top high school talent in the world and as all were privy to see, he fit right in and showed he belongs on the big stage. One thing I noticed that did separate Allen from some of the other prospects at the event was his will to win, he is a feisty competitor who is driven for the win more than the glory, that will be what gets and keeps him on the court as a Blue Devil.

As much as we talk about Allen’s athletic ability there are parts of his game that are highly underrated. The ability to see the floor will make Allen even more dangerous in transition and also give him the opportunity to earn time at the point guard spot. Very adept at getting his teammates the ball it’s pretty common to see the blur of a pass through traffic that finds its’ mark and leads a teammate directly to the hole to score. Allen seems to be able to discern and process actionable information on the court at a rate faster than most 2 guards and make the correct play – that coupled with his ever-improving handle makes him a very intriguing commit for the Blue Devils and assures that the 2014 season is going to be a fun one indeed.With another year in high school and the AAU circuit to add a bit of seasoning to his game the sky isn’t really the limit but the starting point for the 6’3 “rising” senior.