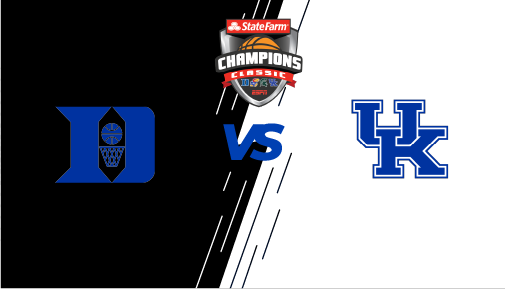 By Brian HoraceNovember 8, 2021No Comments

The ninth-ranked Duke men’s basketball team opens the program’s 117th season with a marquee showdown versus 10th-ranked Kentucky in the State Farm Champions Classic on Tuesday in New York City. A match-up between two of the four winningest programs in NCAA history, Duke has won eight of the last 10 meetings with Kentucky and is 6-2 versus the Wildcats under Mike Krzyzewski. The Blue Devils’ 6-4 record in the 10-year history of the Champions Classic is the best of the four Blue Bloods, followed by Kentucky and Kansas (each 5-5) and Michigan State (4-6). Madison Square Garden has long been a home away from home for the Blue Devils as Duke’s all-time record at the current version of MSG stands at 38-18, including 33-11 under Coach K. Tuesday’s game marks Duke’s 100th all-time when playing in the greater NYC area (72-27, .727). That includes 44-25 in NYC, 7-1 in Brooklyn and 21-1 in East Rutherford, N.J.

Once again the Champions classic is here and once again it’s Duke vs Kentucky. Neither team looks like it did last season and that’s probably a good thing for both. Coming off mediocre COVID seasons both look to rebound this season with revamped lineups.

Kentucky, this year, boasts a much older lineup and a plethora of guys that can knock down the 3-point shot. Something that has not been a strength historically for the Wildcats. With the addition of grad transfer Kellan Grady who shot just over 38% last season from 3 point range while at Davidson and who is a 2000 point scorer for the the Wildcats of Davidson. Also freshman TyTy Washington has shown the ability to score from beyond the arc as well. As a team versus Miles College the Wildcats shot 11-19 for 57.9% from beyond the arc. That’s not to say Kentucky doesn’t have it’s usual big time front court – with the addition of Oscar Tshiebwe (transfer from WVU) they have a solid rebounding big man who goes 6’9 and 255lbs. The strength of Kentucky in my opinion is their backcourt.

This is not the Kentucky team that lost to the Blue Devils 118-84. This team has much more balance, experience and scoring ability. The unknown for this Kentucky group is how they will function on the defensive end.

John Calipari on Paolo Banchero: “He’s got size and girth. He’s 250 pounds. Our 4-men are not that big, but they’re quick and active. And he’s got to guard them too now. He will be a challenge. But he’s gonna be a challenge for everybody all year.”

John Calipari on his last game against Mike Krzyzewski: “I’m hoping this isn’t the last time we play him. Don’t make any mistakes about that. I hope we play him one more.”

“He’s made me a better coach. He’s kept me sharper. We did things those first five or six years that Duke started taking the same kind of guys and it became that competition back and forth. But I never lost respect for what he’s been able to do over forty years.”

The Blue Devils do not have the depth in the backcourt that the Wildcats possess but they do have a close knit group with a talent. Sophomore Jeremy Roach, junior Wendell Moore Jr and freshman Trevor Keels will have to contend with Kentucky’s solid perimeter. Duke should have the advantage on the interior with their 3-headed monster of front court players. Talented freshman Paolo Banchero will be the centerpiece of the Duke offensive attack while Mark Williams will anchor the defensive effort and protect the basket. Theo John will be a valuable asset off the bench to spell either big and brings a level of experience to the front-court that should weight heavily against the Wildcats.

The Blue Devils have the same questions the Wildcats do in terms of defense. While Duke does possess (at least on paper) firepower offensively and a defense-minded center – both aspects need to be proven on the court. Kentucky will be a good measuring stick and provide the coaching staff with plenty to teach from.

With there being more unknowns than knowns with this matchup the x-factors may be the determining factor for this game. In my opinion guard play will determine who wins the day. Is Kentucky’s TyTy Washington as good as advertised and as good as he’s looked in the pre-season? Can Jeremy Roach make the jump this season as a sophomore? Duke will need to shut down both Washington and Grady from the perimeter. They will be the main 3-point threats but not the only shooters Duke will have to contend with.

The other thing that gives me pause is how does Duke defend Kentucky small forwards? I expect Kentucky to go 3 guards, 1 small forward and a power forward. Which leaves Paolo Banchero guarding a smaller and possibly more agile small forward. It’s a matchup to pay attention to in this game and going forward this season – will teams go small and if so what does Duke do?