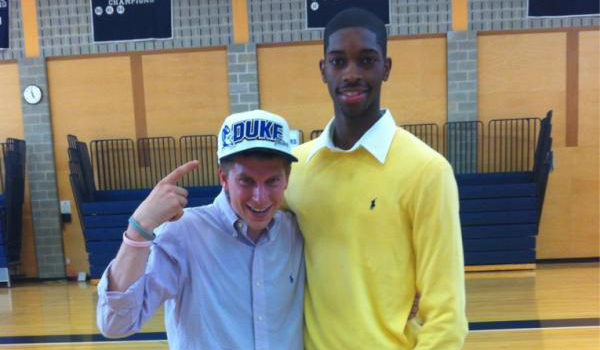 Former Duke men’s basketball captain Amile Jefferson has been added to the staff as the team’s director of player development.

“This is an honor to be back at Duke and I’m so grateful to Coach Krzyzewski for considering me for this opportunity,” said Jefferson. “I’d also like to thank Coach Scheyer for his help through the process and look forward to his leadership in the future. Duke has been a part of my story and my life and it’s a privilege to give back to the program and the University that has meant so much. I can’t wait to work with these guys — helping them develop, grow and learn — and be a small part of something bigger than myself.”

“It is a thrill to have Amile back in our program,” said Head Men’s Basketball Coach Mike Krzyzewski. “Amile is truly one of the best representatives of Duke Basketball as a fierce competitor who never took a day off — whether it was in a game, on the practice court, and more importantly in the classroom. This position serves such an important role in helping our players develop personally, socially and athletically. I’m so proud of the man he has become, and know there are few better to take on this opportunity.”

As a five-year letter winner, a national champion and three-time team captain at Duke from 2012-17, Jefferson played in a program-record 150 games with 103 starts, averaging 7.2 points and 6.3 rebounds per contest. He played in 67 home victories (most in program history) and 124 total victories (third most in program history), while his .971 home winning percentage (67-2) ranks as the second best among any Duke player.

Off the court, Jefferson remains the only player in Duke history to be named to the All-ACC Academic Team four times. He served as a team captain for three seasons – becoming the only Blue Devil in the Coach K era to do so – and was a finalist for the Senior CLASS Award in 2016-17. He earned his undergraduate degree in history from Duke in 2016 and received a master’s degree from Duke’s Divinity School in 2017.

In addition to Jefferson, the Blue Devils also announced the promotion of RJ Hunter to director of men’s basketball operations and Zach Marcus to director of scouting and analytics. Trevor Marcus has been added to the staff as a video assistant.