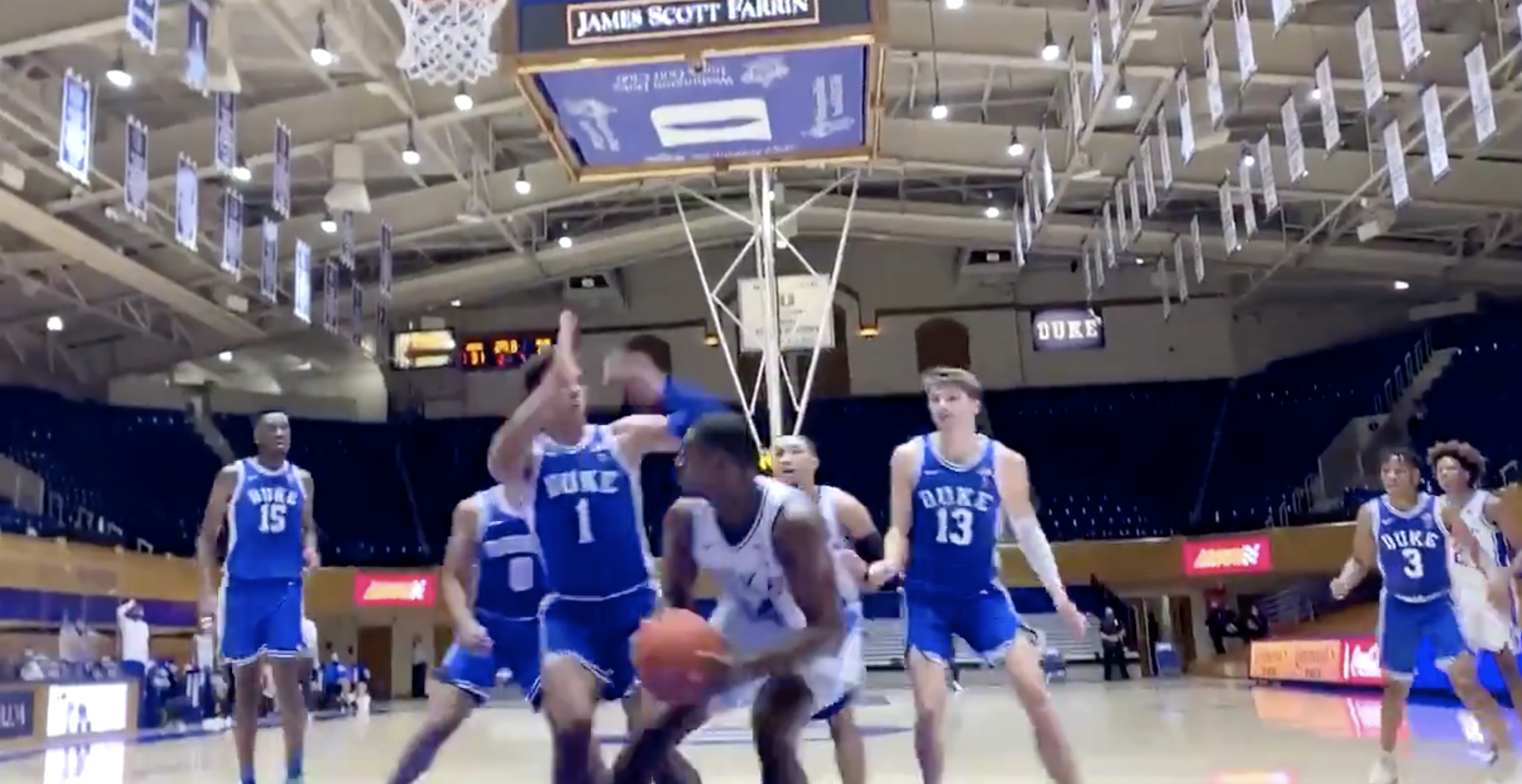 By Brian HoraceNovember 13, 2020No Comments

With benches socially-distanced and a number of other COVID-19 protocols, the Blue Devils were split into two teams of seven and competed for two halves – the first being 15 minutes and the second increased to 20. Both halves began with no score on the board.

Both units were efficient in the early going, as each committed just one turnover through the first six minutes of the scrimmage. After trading points through the first portion of the frame, the White team went on a 17-3 run to open up a 27-17 advantage with 4:40 left in the half. The Blue squad would respond with a late 9-2 surge to pull it back to within three, but a balanced scoring effort that saw six different players get on the board helped the White team claim the opening period, 35-29.

Senior Jordan Goldwire and freshman Henry Coleman III netted eight points each to pace the White team’s scoring output in the first half, followed closely by seven points from both graduate student Patrick Tapé and freshman DJ Steward. Goldwire was the team’s main facilitator as well, dishing out five assists with no turnovers.

Freshman Jalen Johnson came out of the gates aggressive for the Blue team, scoring seven points in the first five minutes of play. The Milwaukee, Wis., native finished the period with nine points and five rebounds.

The second half proved to be a tightly contested affair that came down to the final possession. After the White team built a 21-12 advantage in the opening minutes, the Blue team fought back with a 12-2 run capped off by a Tapé layup to reclaim its first lead since 5-2. Neither side would hold a lead greater than five points the rest of the way, with each team exchanging baskets down the stretch. Physicality played a major role in the half, as the White team finished with a 24-22 advantage in points in the paint.

Freshman Mark Williams gave the White team a four-point lead with 46 seconds remaining, but his basket was quickly answered with a Wendell Moore Jr., layup to bring the deficit back to two. The Blue team had one last opportunity with six seconds left, but a steal by Steward closed out the 40-38 win for the White squad.

Johnson’s hot start on the offensive end led to a 25-point performance on 11-of-25 shooting over the two periods. He also brought in nine rebounds and recorded three assists on the night. Goldwire finished with a game-high seven dimes to go along with 19 points, while Steward posted 16 points, six assists and five rebounds. Fellow newcomer Jaemyn Brakefield added 11 total points on 4-of-8 shooting with seven boards.

Duke’s next appearance in Cameron Indoor Stadium will be for its season-opening matchup with Gardner Webb on Nov. 25.