By Brian HoraceNovember 21, 2013No Comments 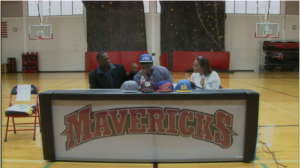 Justise Winslow a consensus top 15 prospect has chosen the Duke Blue Devils over Arizona, Texas A&M, Stanford, Florida & UCLA. The 6’5, 210lb small forward is a high flyer and top level defender and rounds out a terrific class for Duke in 2014. Although not part of the package deal, Duke was hoping to land the 5 star prospect who brings a level of athleticism that Duke isn’t used to at the small forward position and sets the stage for an exciting next few years.

Winslow visited Duke along with good friends Jahlil Okafor and Tyus Jones and has ties to USA basketball along with the other two Duke signees. Okafor’s father made it known via twitter he hoped Winslow would join Tyus and Jahlil at Duke and urged Duke fans to let it be known that he was the missing piece to an amazing class. Duke now has 4 recruits for the 2014 class – Point Guard Tyus Jones, Shooting Guard Grayson Allen, Small Forward Justise Winslow & Center Jahlil Okafor.