By Brian HoraceFebruary 5, 2015No Comments

Duke didn’t play it’s best ball but was still able to get a close 6 point victory against Georgia Tech at home 72-66. This was a game of Duke gaining a lead and a tough Georgia Tech team fighting back. Some will speak to Georgia Tech having only one ACC win as a sign that Duke should have blown this team out but when you look at who this team has played and the close games they have been in you have to understand that they are not the sum of their wins and loses. This is a team that took Notre Dame to 2 overtimes, and lost a 1 point game to Syracuse then a 3 point loss in the second game against Notre Dame. They also beat a Miami team that blew out Duke – and beat them by 20. So Duke was going to have their hands full with this team no matter the records.

Duke built a nice 10 point lead in the first half only to see that lead evaporate due to hot Georgia Tech shooting beyond the arc and some late first half turnovers. Duke would end the half with a 4 point lead.

The second half saw a good amount of the same from Georgia Tech, hot shooting beyond the arc to the tune of 83% for the half while Duke struggled, just hitting 2 of 7 in the second half and only 5 of 18 for the game.

Duke couldn’t push the lead to more than 7 points in the second half and would need all of Quinn Cook’s 17 points to keep its slim lead. Duke got 14 points and 8 rebounds from star freshman Jahlil Okafor who went 5 for 12 for the game but had 3 turnovers. Freshman Justise Winslow seems to have gotten over the wall he hit a few games ago and posted a second straight double-double with 15 points and 10 rebounds. Tyus Jones scored 9 points on 3 of 10 shooting and also had 5 assists to 4 turnovers, the freshman guard also had 3 steals.

With the dismissal of junior guard Rasheed Sulaimon bench points would be at a premium but sophomore Matt Jones stepped up with 11 points in the game and also made a game clenching steal near the end of the second half.

This was a weird game for me because I saw long stretches of time when I wasn’t pleased with the Duke defense but they seemed to do enough to win. Duke game up way too many open shots from beyond the arc. Georgia Tech shot 72% from 3 point range, which is out of this world. They only shot 50% from the free throw line. It’s hard to discern whether this was just a team on fire or a lack of perimeter defense by Duke. I’ll have to re-watch.

Duke will have to ratchet up the defensive intensity going forward and some of that begins with Big Jah in the middle. Teams are consistently going at the big man and if Jahlil doesn’t pick up some defensive fundamentals that is not going to cease. As good as Jahlil is on offense his defense has yet to catch up to his ability to put the ball in the basket. I’m not certain if it is a function of youth, effort or just concentration. The defensive lapses in conjunction with sub par free throw shooting has found the big man on the bench for stretches at the end of games.

On an ending note, this team will go as far as Tyus Jones and Quinn Cook take them, and I am firmly in their corner. These guys have fought some battles this year and have been the key for each and every hard fought Duke victory. They may not have been at their best tonight but Quinn Cook was a stud in the second half of this game and Tyus is as steady a point guard as Duke has had in a while. He lulls you into thinking he is a pass first guy but when this dude turns it on he is a dangerous offensive player. 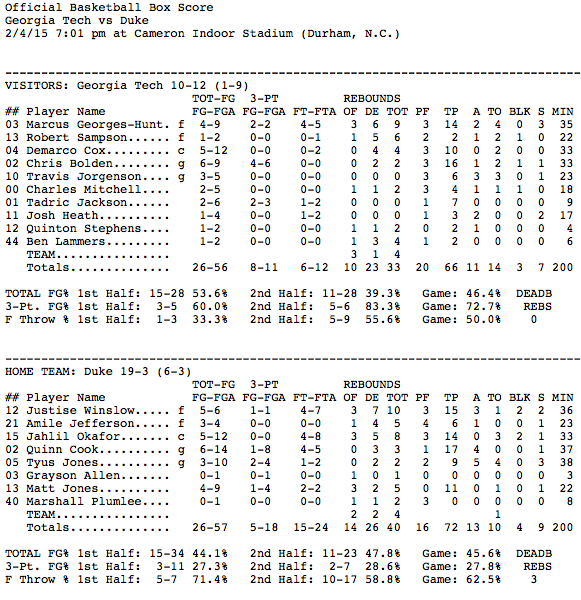