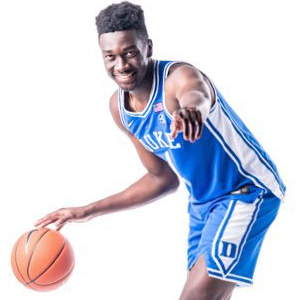 By Brian HoraceNovember 6, 2020No Comments

Named after Class of 1995 Hall of Famer and three-time NCAA Champion Kareem Abdul-Jabbar, the annual honor in its seventh year recognizes the top centers in men’s college basketball. A national committee of top college basketball personnel determined the watch list of 20 candidates.

A four-star prospect hailing from Virginia Beach, Va., Williams was the No. 30-ranked player and No. 5-ranked center in the incoming freshman class. The 7-foot presence in the paint played three seasons at Norfolk Academy before transferring to IMG Academy in Bradenton, Fla., for his senior season. During the 2019 Nike Elite Youth Basketball League (EYBL) circuit, he competed for Team Boo Williams and averaged 14.8 points, 8.9 rebounds and 2.1 blocks per game while shooting 64 percent from the field. Williams was a 2020 McDonald’s All-American and was selected to participate in the Jordan Brand Classic prior to the event’s cancellation. His sister, Elizabeth, is a former Duke women’s basketball All-American now playing in the WNBA for the Atlanta Dream.

In late January, the watch list of 20 players for the 2021 Kareem Abdul-Jabbar Center of the Year Award will be narrowed down to just 10. In late February, five finalists will be presented to Mr. Abdul-Jabbar and the Hall of Fame’s selection committee. The winner of the award will be presented on Friday, April 9, 2021, along with the other four members of the Naismith Men’s Starting Five. Additional awards being presented include the Bob Cousy Point Guard Award, the Jerry West Shooting Guard Award, the Julius Erving Small Forward Award and the Karl Malone Power Forward Award, in addition to the Women’s Starting Five.