By Brian HoraceApril 19, 2014No Comments 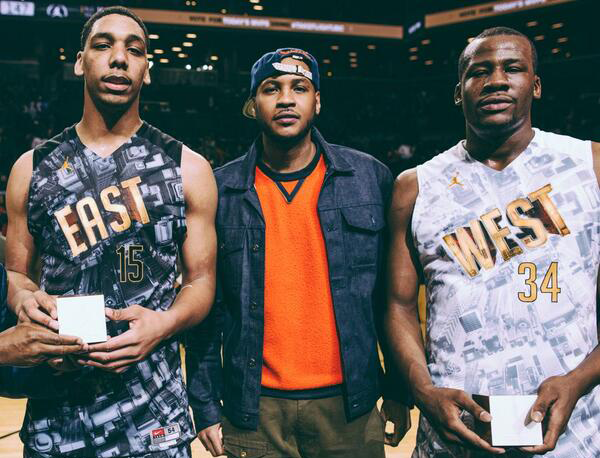 Last night Duke as well as Kentucky, North Carolina and Kansas were well represented in the Jordan Brand Classic. The East would take the game 158 – 147.  Jahlil Okafor with his 29 points off of 13-17 shooting and 9 rebounds would take the MVP and Cliff Alexander of Kansas would take it for the West. It was clearly a big mans game and each side had impressive ones, anyone who plays Kansas is going to have their hands full. How anyone covers Cliff Alexander and Perry Ellis, then possibly Myles Turner? Good luck with all that. Anyway, this is about the Dukies…

Grayson Allen
We’ll start with Grayson Allen who scored 7 points on 3 of 8 shooting and 4 rebounds…this wasn’t Grayson’s best game but in his defense it’s an all-star game and it’s not the most comfortable of situations. Grayson’s game will add a little bit of versatility to the Duke back-court, especially if he continues to improve his handle. Grayson can knock down the open shot but I think what he gives Duke is a guard that can create and get into seams and either get to the rim or kick, mostly though his abiity to finish is something we havent seen much from Duke 2 guards lately, his level of athleticism is a welcome addition. The key is going to be is timeline of improvement with a level of competition that he may not be used to. How quickly he can absorb coaching will be his key.

Justise Winslow
Winslow would give the West 13 points on 6 or 11 shooting, 2 rebounds and 3 steals.  Take notice of how well Justise stuffed the stat sheet in this game, it’s a portent of things to come. He, just like Arizona commit Stanley Johnson are the Swiss Army Knives of the class and of their respective teams. Justise does a lot of things well but where Duke will benefit is on the defensive end, he has bounce for sure but is ability to guard multiple positions is probably the most important. He will be great for Duke when they switch, he moves laterally well and there shouldn’t be any drop off no matter who Winslow gets matched up with on the switch. He is a confident shooter and can knock down shots and that is the gravy for Duke.

Tyus Jones
Jones was the understated star of the Duke class in this one and this is a good representation of what we could see at Duke. Jones scored 10 points on 3 of 5 shooting, 12 assists and 7 rebounds (nearly a triple double). Jones is a quiet killer, not jumping up and down and pounding his chest but he goes out and makes the difficult things look very easy. He is very good at getting into what looks like a high traffic area and delivering a heat seeking missile of a pass to the correct person. His decision making on the fly is impressive. It wasn’t really clear what is prowess on the defensive end will look like, but as far as running a team, there is no better point guard in the class. He will make his teammates into stars.

Jahlil Okafor
Jahlil was a star in this game. Okafor would pour in a game high 29 points on an efficient 13 or 17 from the floor, he also pulled down 9 rebounds. Most people will just see the dunks and either be impressed by them or say that it wasn’t very impressive because well all he did was dunk. Missed on most was the way he ran the floor. One of the biggest knocks on him was that he wasn’t particularly in shape and wasn’t able to run the floor, well that was not the case. Okafor looked svelte and pretty chiseled and ran the floor like I’ve never seen him do. He showed very impressive footwork and stamina for days. Jahlil and Tyus are a very impressive combination and their symbiotic relationship will be THE offensive weapon that will propel Duke to wins this year, that coupled with the what Duke is bringing back in terms of roster and experience could spell trouble for their opponents.