By Brian HoraceJanuary 26, 2012No Comments 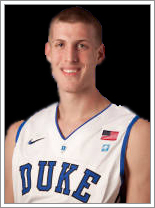 It was anybody’s guess as to how the Devils would respond after the Florida State loss. It could have gone either way and the Terps of Maryland knew that. Maryland figured that if it could make Duke into a 2 point shooting team it could hang and have a chance to win at the end. The first half of the game the Terps played their strategy nearly perfectly. The Devils forced three after three, and the frustration spilled over into the offense which was stagnant. MD did a great job of shutting down Duke guards who were a little short handed with its only true distributing point guard, Quinn Cook, not making the trip to MD.

Duke was able to keep the Terps at bay with the inside play of Mason Plumlee who ended the game with 23 points, a team high. Mason also lead the team in rebounding with 12 and in a stat that shows who Duke missed point guard Quinn Cook, Plumlee also lead the team with 4 assists. Aiding PlumleeÂ  in the scoring column was Ryan Kelly who scored 14 on 5-7 shooting.

MD was able to give the guards for Duke trouble, Maryland’s perimeter defense as well as Duke’s inability to get good shots kept the Terps in the game. Maryland was able to get deep dribble penetration against Duke forcing Dukes bigs to rotate and leaving an open passing lane for easy shots for Maryland’s inside players. Duke often looked disjointed and out of sorts and it showed in the first half with the Terps making a living in the paint and at the free throw line, and Duke forcing shots up from 3 point range ultimately ending the game 3-16.

Finally, in the second half after a MD run regained the Terps the lead, Duke was able to buckle down on defense, helped by Maryland’s offensive drought.Â  Duke was able to poke holes in the Terps defense as they tried to adjust to the play of Mason Plumlee who was dominant and aggressive, this opened up driving lanes for freshman Austin Rivers who finished with 10 points and allowed Ryan Kelly to get free for a couple of threes and mid range jumpers when Duke was in need.

As bad as Duke was from beyond the arc it made up for it in free throw shooting with Mason Plumlee surprisingly hitting 5 out of 5 in the game. Duke also cut down on the turnover with only 9, and out-rebounded the Terps 36 to 31.

This game was a lot closer than the score would indicate, MD was overcome in the last 12 minutes with Duke becoming more efficient on offense and playing a much stouter defense.

Mason Plumlee played a mans game, points, rebounds and assists. Mason was aggressive and looked to score but was smart enough to pass out when he needed, looking for open teammates. Mason was also 5 out of 5 from the free throw line and Duke can look to this as a positive sign in a string of somewhat sub-par games as of late.

Rebounding has obviously been put as a premium for this team and despite the loss to Florida State Duke has been trending positively in that stat (SEE MASON PLUMLEE).

Dukes shot selection especially from 3 was atrocious, shots were rushed,Â  some were fall aways. Duke has to do a better job at deducing when its an appropriate time to shoot long range and when it makes more sense to pound it into the paint or work the ball inside then out.Â  Those long rebounds and wasted possession are as bad as turnovers, allowing run outs and easy transition opportunities. Some of this falls on the shoulders of freshman Austin Rivers. Watching the game you would think he shout 7 or 8 bad threes, turns out that there were only 0-3.Â  Because these shots aren’t taken in the flow of the offense they tend to stand out. Andre Dawkins also took a few shots that looking back perhaps needed to go inside.

Defensively the Devils seem to be getting better, slowly. Perimeter defense is a problem and that first line of defense is killing Duke. Guards are able to get into the lane much too easily and that creates problems for an already suspect defense. This game could have gone horribly wrong with the fouls that were accumulating on the bigs after MD guards drove the basket putting the Duke big men in precarious situations.