By Brian HoraceOctober 27, 2019No Comments 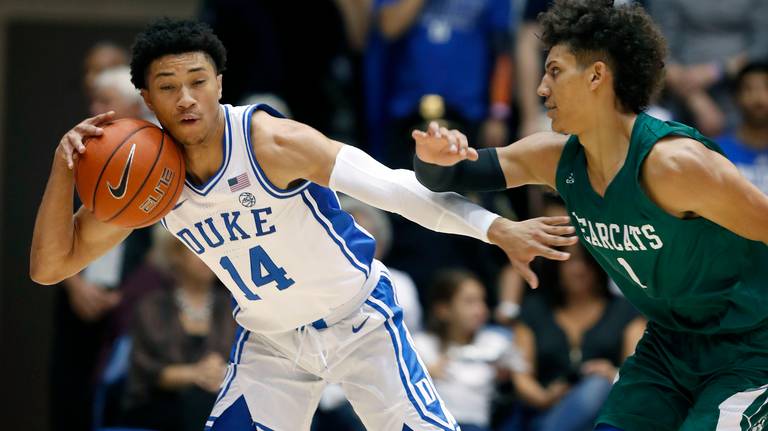 In their first action of the season the Blue Devils took on the challenge of the Division II National Champion Northwest Missouri State. The Bearcats gave the Blue Devils a good test and a good evaluation of where they are and where they need to be.

Not a conventional team, the Bearcats were a very impressive team from beyond the arc. Getting the Blue Devils in switches and cashing in from three point range to the tune of 15-34. The mobility and strong perimeter game rendered the Blue Devils biggest advantage (a large front court) virtually useless. This should have been a game where Vernon Carey and Javin DeLaurier had field days against a team who’s tallest player was 6’8 but with Carey racking up 4 offensive fouls and being limited to only 10 minutes in his debut and DeLaurier only getting 2 opportunities at the rim Duke’s advantage was nil. It will be an interesting story line throughout this pre-season for the Blue Devils – with no one expecting them to be very good from the outside, can they improve on their interior offense to a point where they can negate other teams advantage from beyond the arc and can they pair that with good perimeter defense.

The first half saw Duke defend well from inside the 3 point line but the hot shooting Bearcats were very good from beyond it. Overall in that first half Duke held NWMS to 32% shooting. For the game the Bearcats shot just under 40%. For Duke offensively, as expected, a bit of a mess and a mixed bag. The only 3 point shots Duke was able to manage game from reserves Justin Robinson and non-starter Cassius Stanley. Overall the Blue Devils shot a paltry 2-16 from 3 and 42% from the field overall.

A flurry of 3’s near the end of the first half brought the contest into a bit of a danger zone. The Bearcats hit 6 3 pointers in the final 5 minutes while the Blue Devils would miss 3 free throws, 3 shots and turn the ball over 3 times during that span.

The Blue Devils would take the game 69-63 but never really seemed comfortable and looked like a team very much figuring things out. There lacked a spark emotionally which could come with time.

Tre Jones would lead the Blue Devils in scoring with 18 points on 6 of 15 shooting, Jones also had 2 assists and 5 rebounds. Freshman Matthew Hurt was 8-16 from the floor for 176 points. Hurt aded 4 rebounds and 2 assists in his debut.

Trevor Hudgins scored 27 points and went 7-13 from beyond the arc to lead the Bearcats who shot 15-34 from 3 point range.

The bright spots for Duke were their ability to force turnovers (21) and to capitalize on those turnovers, scoring 20 from Bearcat miscues. Duke won the rebounding battler 44-34 with Jack White grabbing 10 and Javin DeLaurier grabbing seven boards in the win.

Next up for the Blue Devils is 7pm game at home versus Fort Valley State – the last game before their early season Champions Classic matchup against Kansas.

SOPHOMORE GUARD TRE JONES On what Duke can learn from a game like this:

“Coach [Mike Krzyzewski] said as well as anyone could say – it was a learning experience for sure, for all of us, especially the freshmen in their first real game being out there tonight. They got to see what it was like. That team [Northwest Missouri State] was really good, a group full of winners. They were 38-0 last year so they know how to win and they know how to play really well. Coach even said that he thinks they’d beat a lot of D-I teams. It was a good win, knowing that they shot 15-for-34 from three, I think it was. We were still able to force them into 21 turnovers. There are a lot of good things that we took from the game, but a lot of thing that we improve on.” When asked if he feels like he’s adjusting to being a leader for Duke: “I have to [be a leader]. Coach [Mike Krzyzewski] holds me to it every single day. He’s pushing me to be as much of a leader as I can be, every single day, so I’m trying every way possible to be the best leader I can be.” On Duke’s defense: “Coach [Mike Krzyzewski] said that our defense was pretty good tonight, other than [Northwest Missouri State] shooting the three really well. If we can keep improving on that, then that’s what’s going to win us games at the end of the year. On what Duke needs to improve on: “Offensively, I think just finding rhythm. We had a lot of shots that we passed up and were hesitant to shoot right away, but we were able to find some things. Matt Hurt down the stretch was unstoppable. We were able to find that we can go to him and he was just making plays for us.”

SENIOR FORWARD JACK WHITE “These guys [Northwest Missouri State] are no joke. Full credit to them for coming and playing. Obviously it’s a tough environment.”

“I think we did a good job of not putting [Northwest Missouri State] in the bonus. I think we did a good job of showing our conditioning. I think we’re in good shape, and obviously it helps when you have 10 or 11 guys that can play. I think our defense was great, apart from giving up those threes. It showed that we’re really willing to compete on that end and that’s something that we really want to hang our hat on and can lead to easy buckets, as it did at times in the game. There are a lot of things [to improve on], as there are going to be after the first proper game, but we’re looking forward to learning from this and moving on to Wednesday [versus Fort Valley State.]” “I think every guy that steps out on the court loves playing D and loves locking guys up. That obviously fuels our transition and getting easy buckets, which gets guys going. Duke is a school that’s been known for playing hard-nosed defense, picking guys up, and just fighting. You’re not going to get anything easy, and I think that’s really what our team wants to be known for as well.”

FRESHMAN FORWARD MATTHEW HURT “This was a great team we just played, Division II Champs, and we had scouting and everything, but they made some tough shots and we have to give a lot of credit to them. Just the takeaway from this game is that we’ve got to compete harder and play better defense, rebound, a little bit of everything.”

On his comfort level on offense tonight: “I felt confident and my coaches told me to keep shooting it and my teammates told me to keep shooting it. My outside shots weren’t falling so I had to do something else rather than just shoot the ball, try to be more than just a three-point shooter and just try to finish, make the defense help, kick to the open guy. I’m going to just keep trying to get better, finishing, shooting.”

When asked what the biggest transition has been in playing Duke defense: “It’s just the speed and the positions that we have to be in, help side, help the helper. There are a lot of things that go into team defense. There’s no individual defense. Everybody on this team has everybody’s back. Denying the ball, you can get back-doored but there are guys behind you just playing team defense.”

“That was really a good game for us. We knew coming in how good [NW Missouri State] has been, and are, and will be. You don’t win 100 out of the last 105 games, and go undefeated last year, and win two out of the last three national championships without having great kids, really good talent, and outstanding coaching. For us, as a pretty young group, to be able to play against that experience, and that type of offense … for our league it’s unconventional, where you’re never in the post. They play five out, everybody can handle, everybody can shoot. Overall, defensively, I thought we did a really good job. Not a good job, a really good job. To get them to 21 turnovers and hold them in the 60s — defensively we were really good. Offensively, we are not a good shooting team, we are a very average shooting team, but we should be a good finishing team. Around the basket we left a lot of points on the court. We should have scored a lot more points. We got some young guys who shoot the ball inside instead of finishing — there’s a big difference. You don’t shoot inside, you finish. With how hard they’re playing, if you don’t do it that way, you’re gonna miss. Overall really good test for us, first outing, defensively I’m pleased, finishing, shooting, I’m not, but we beat an outstanding team tonight. They’re accustomed to winning basketball games.”

On having two defensively-sound guards in Tre Jones and Jordan Goldwire:

“Jordan’s had a great summer and fall, and the two of them really like playing with each other. The one group with the two of them, either Wendell (Moore) or Cassius (Stanley), Jack (White) and Matt (Hurt), for a period in the first half, it was tough to score against — that group played really well defensively.” On the different lineups/combinations/rotations: “We’re still very much figuring it out. And, we had to try to win the game. [NW Missouri St] didn’t come here to lose the game. They came here to win. That’s how they played, and that was a big time game for us, October 26, we’ve had 23 practices, and those guys [NW Missouri St] have played together for a long time…They’re really smart, well-coached players, and very unselfish. To be quite frank, they’d give anybody a very tough game, and beat most people. That was a good win for us.” On Matt Hurt’s 13 points in the second half: “Well they couldn’t guard this one set real well. They guarded most things real well, but him at the elbow was real effective. Matthew was very good, for a freshman, to play that defense, be a 6’9” guy, to be able to move out there, was good. It was tough for Vernon (Carey) and Jav (DeLaurier). They had eight turnovers in the first half. Our big guys. That shouldn’t be, because a big guy isn’t being pressured. We were much better in the second half, turnover-wise. I think we had 11 in the first half, and ended up with 14.” When asked if young players’ body language showed that they were demoralized: “I wouldn’t say demoralized. I would say disappointed. And they should have been. They expected to be better, and that’s good. If they were laughing and joking and giving high-fives, then they would be acceptant of the fact that they didn’t play as well. For a young player especially, you can’t beat yourself up. You have to be your biggest fan. When you miss a shot, it can’t be the end of the world — it’s a lack of maturity. Our guys need to get older and tougher. But, on the defensive end, they had a different personality, and that has to translate to the offensive end. Tell me what an 18 year old expected in the first game. They expected dunks, and high-fives, and all that. And then oh! These guys we’re playing against, they’re really good. That wasn’t in their dream.”