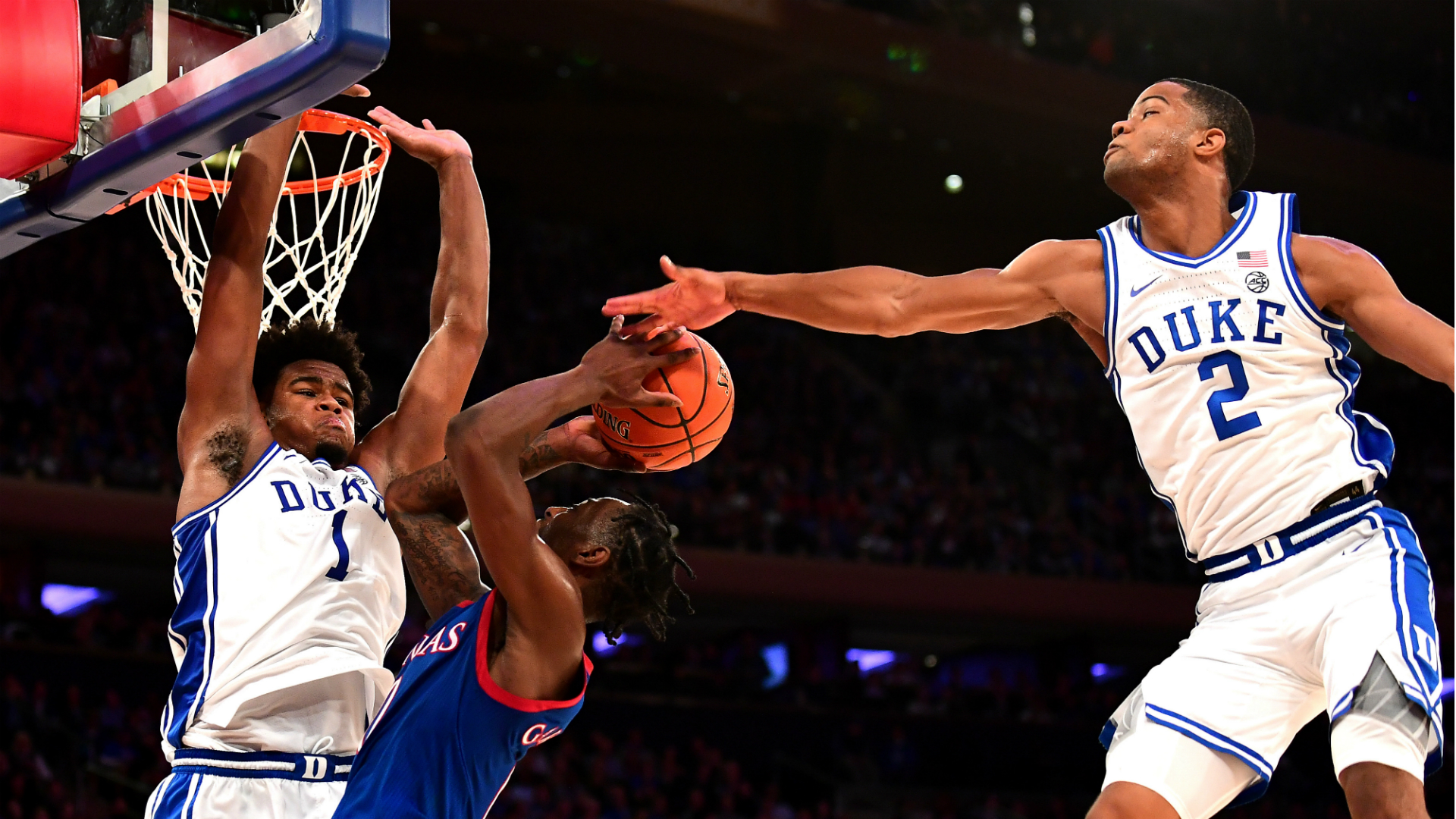 By Brian HoraceNovember 5, 2019No Comments

With a little help from 28 turnovers from the Jayhawks and some good defensive pressure the Blue Devils were able to outlast the Kansas Jayhawks 68-66. It wasn’t a thing of beauty for either team, while for Kansas it was turnovers for the Blue Devils it was shooting. The Blue Devils came into the season with questions about shooting and it manifested itself to the tune of 36% shooting overall and 33% from beyond the arc. If there are any takeaways from this game for the Blue Devils is that they will have to be defensively engaged on every possession, in every game. Kansas lead the Blue Devils in nearly every facet of the game except for turnovers.

Duke got points when it needed them despite long stretches of offensive puttering out but they rarely let up on the defensive end. Limiting the Jayhawks bigs to a total of 17 points between their 3 bigs was huge for the Devils. Putting Udoka Azubuike and David McCormack in uncomfortable positions in their offense , an important wrinkle in Duke’s defensive scheme, paid off to the tune of 7 turnovers.

Kansas was paced by Devon Dotson who scored 17 in the loss, Dotson was forced into 6 turnovers but was 5-9 from the field. For the Blue Devils Tre Jones led the way with 15 points on 5-14 shooting, Jones added 7 assists to 3 turnovers and grabbed 6 rebounds.

Duke also got double figure contributions from Cassius Stanley (13), Vernon Carey Jr. (11) and Matthew Hurt (11). Carey and Stanley were Duke’s most accurate 3 point shooters, going 2-2 and 1-1 respectively from beyond the arc. Carey and Jones would lead the Blue Devils in rebounding with 6 each. Also huge for the game were the 18 bench points, 9 of those provided by Alex O’Connell who also had 4 rebounds.

The takeaway from this game is that the early returns for this Duke team seem to indicate that they will not have an offensive firepower to rescue them as they did last season they do have the ability to defend well and being down by ten, they showed the ability to . Gutting out games.

We were disappointed in the outcome because that was a game in which each team probably could’ve won multiple times. We had ourselves in a really good position mid-way through the second half and then things got away from us and they made some big plays. But, it’s a learning experience. I don’t know that a game, win or lose, on November 5th is going to count much in March, but still, there are a lot of things we can learn from this game and hopefully improve on.

Duke’s defense is better than the exhibition games we’ve played. We turned it over four times last game and I think 11 (times) the game before that. I think we played uncharacteristically—I think we got out of character. I think we made easy plays difficult many times. I think a lot of that is nerves and the environment and guys wanting to do well so badly. We’ll take better care of the ball moving forward. But, certainly, that’s inexcusable to turn the ball over like that.

I thought Marcus was our best performer today. I thought he played both ends well, drove it and got downhill. He had five assists also. He’s our best defender regardless of position. Marcus played well. He’d be the first to tell you he didn’t do quite enough because that’s what winners should think like. But, I thought he did some nice things.

SOPHOMORE GUARD TRE JONES On playing in the first game of the season: “It felt great out there. Obviously, there are things that we can do better, but the most important thing was getting the win, and everyone stepped up tonight. Everyone was making plays when we needed to make plays and making those winning plays down the stretch that we needed to make. As a team, the way we prepared definitely set us up to make those plays at the end to win the game.”

On the difference from this year’s team to last year’s team: “Our depth for sure. Everyone else saw it out there. The depth that we have this year is much different then what we have had in years past. We can go much deeper into the bench and not drop off at all and the more we go to the bench, the more guys bring. But being out there for the first time tonight felt great. Haven’t been out there before, not only here but in the big game like that, I wouldn’t say it’s much easier but less nerve racking.”

FRESHMAN GUARD CASSIUS STANLEY On how surprised he was after the first game of his Duke career: “I was very surprised honestly. “I came in super nervous but the veterans on the team helped. MSG (Madison Square Garden) is a different monster and I loved the environment out there and can only thank my teammates for everything.”

On nerves at the beginning and during the game: “I think it started when our defense started to pick up. I think the first half my nerves left because our defense started playing very well, forcing 27 turnovers, and after that I think we just had the confidence and I was very confident we were going to come back after a little deficit in the second half.”

FRESHMAN FORWARD MATTHEW HURT On the win: “They were a veteran team. Playing hard and playing Duke basketball really helped us. Coach wants us to keep fighting and there was a spurt where we didn’t play well but he told us we have to play better, and we did that.”

On forcing Kansas to commit turnovers: “Coach emphasized defense the whole year and how good our two guards are pressuring the ball. Our game plan was to pressure and double team and not make it easy for them, so I think we did a good job, and everyone played their role.”

On the game: “What a way to start the season. College basketball certainly did it right to have the Champions Classic as the event to start the season, to bring four of the storied programs in our country together in this venue, you gotta be kidding me, and the game certainly lived up to it. That was a big-time game. We were fortunate to win. I thought we earned the win. If they would have won I would have thought they earned the win and that’s what makes it a great game.”

On sophomore guard Tre Jones: “I think the difference maker for us was Tre [Jones]. We have a lot of young guys and a lot of new guys but we’ve really tried to play good defense in our first 30 practices and it paid off tonight. We played really good defense and it starts off with that kid and the poise he had on offense. I’m really happy with my team. This was a terrific win for us against what I think will be a championship contender in Kansas.”

On Jones saying he felt less pressure tonight than he did this time a year ago: “I think part of it is the role he had last year. Even though he’s the point guard, he wasn’t necessarily the leader all the time. He had to compliment two really outstanding players and a third one, an outstanding talent who played well in Cam [Reddish]. And this year it’s his team so he feels less pressure with more responsibility. Those are the type of people you like in your organization. “

On his freshmen and whether or not he sensed any nervousness: “I didn’t think they were nervous at all and part of it, we came up Sunday, and we talked a lot about it. We were at the Nets facility, went to the Nets game last night, came here for shootaround and I felt a good mood. I didn’t know if it would be good enough to beat them, but I didn’t think they would be nervous. And Tre having the ball as much as he does helps, because I think you might have seen maybe some nervousness if they had to do more with the ball instead of just reacting because of the position Tre put them in.”

On playing in Madison Square Garden: “It’s an honor, the very first thing. I’m not going to short change our arena, Cameron, but this is the one I love to play in after Cameron. The balls bounce different, the noise, there’s just something about this place. I’ve now coached I think over 50 games in here… Eventually when I stop coaching, I’ll look back at the times here as very special times in New York.