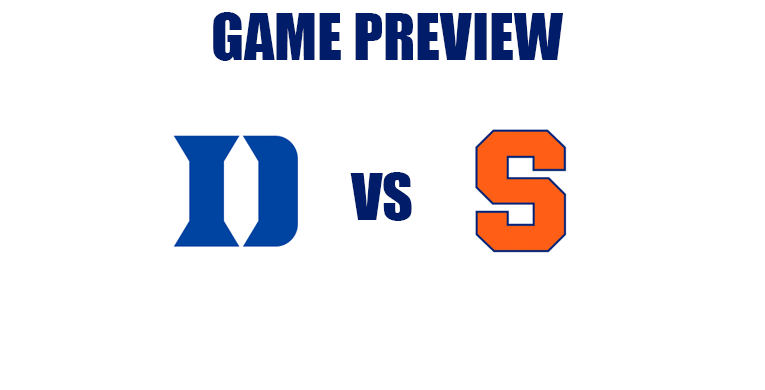 By Brian HoraceFebruary 21, 2017No Comments

Wednesday, the streaking Duke Blue Devils will travel to NY to face the slumping Syracuse Orange in a battle of storied programs. The game marks the first time two 1,000-win coaches have ever faced each other and if past results are any indication, it should be a very intriguing and hotly contested matchup. Duke leads the all-time series with the Orange, 5 to 4, and Coach K has a 3-4 edge against Coach Jim Boeheim head to head. In the standings, Syracuse is currently 3.5 (8-4) games back from the league-leading North Carolina Tar Heels with no chance really to catch the Heels, while Duke is 1 game back with a conference record of 10-4 literally nipping at UNC’s Heels. This game always draws a raucous crowd and as of yesterday, Syracuse officials said that the school has already sold more than 28,000 tickets for Wednesday’s contest.

The Orange are led by a pair of senior guards in Andrew White III, who is averaging a team high 17.9 points a game, and John Gillon, averaging 5.4 assists per outing.

Last time out for the Cuse, Ben Lammers scored 23 points and Tadric Jackson added 20 as Georgia Tech held off a late surge by the Orange to take the game by 6 points, 71-65, for their 3rd straight loss.

They need to impose their will defensively against Duke, but also for Syracuse to be successful, they need to limit Duke possessions and rebound the basketball. Limiting Duke fast break opportunities gives them a chance to fully set up their defense and force the Devils to actually play against the zone. If Duke is able to successfully break the Cuse zone then the Orange must keep pace with Duke, which is easier said than done. Duke leads the ACC with an average of 9.3 three-pointers per game in league play. Duke is shooting .447 from deep during its seven-game winning streak, making 10.9 per game. Duke scores the ball with great acumen and while not a great defensive team, during this streak they’ve been able to put offensive pressure on opposing teams.

The Blue Devils are led by sophomore scoring machine Luke Kennard, who is averaging a team best 20 points a game. Duke is one of three major-conference teams with three players averaging at 15.0+ points (along with Arizona State and UCLA). Freshman guard/forward Jayson Tatum and junior guard Grayson Allen are averaging 16.4 and 15.2 respectively with Tatum adding 7 rebounds and Allen adding 4 assists a game.

Duke battled and survived a tough and offensively talented Wake Forest team. John Collins lit up the Blue Devils with a career-best 31 points and 15 rebounds as Duke once against struggled to get stops in the paint. Duke managed to to hit their free throws down the stretch and put just enough offensive pressure on the Demon Deacons to pull ahead when they needed to.

What most Duke fans want to see is a defensively challenged Duke team step up and do what they have not been able to do with consistency all year and that is get stops. The reality of that is that this is a team still learning to play together on that end of the floor. To be successful Duke will need to break through the Syracuse 2-3 zone and there are several ways I see Duke attempting to do that:

Transition baskets – Getting out in transition is one way Duke can limit their instances of having to play against the zone. Rebounding is the key to this being a success tactic. Ball handling is also a key element, Duke boasts multiple ball-handlers in Allen, Kennard, Tatum, and Jackson being options to trigger and run the break. Jayson Tatum’s ability to board and go coast to coast may come into play.

Attack the gaps in the zone – Every zone has gaps, with crisp passes and good ball-handling Duke can work the angles and seams if they can take care of the ball. Luke Kennard is an excellent candidate to exploit this weakness.

Camp out in the middle of the zone – Duke has utilized Amile Jefferson and Brandon Ingram in the past and I can see them using Jefferson, Tatum, Giles, or even Kennard in the middle of the zone to attack it from around the free-throw line. It’s most effective when the player at that spot is a good passer but also is a threat to score. Kennard being the team’s best all-around scorer could be the best option but as the zone collapses it also takes another shooter from the 3-point line.

Screen the zone – Having as many offensive weapons as Duke does, screening the zone does present a viable option because it creates either an open jumper or a driving lane. This is perfectly suited for Jayson Tatum or Luke Kennard who are excellent at both driving and shooting off of screens.

Endgame: I don’t believe either streak will end, I think Duke will move to 8 in a row while Cuse will drop its 4th straight. Duke has proven itself a worthy road team during this streak and the amount of weapons that Duke has on the offensive end may very well overwhelm the Orange. That doesn’t mean this will be a runaway – Duke is very prone to having offensive lulls and hasn’t proven it can put teams away. Duke has been winning, but they have not been winning by a comfortable margin. Duke has a very small margin for error with its porous defense and bad habits, but that being said, this is the time to capitalize on a Syracuse team hitting a wall.