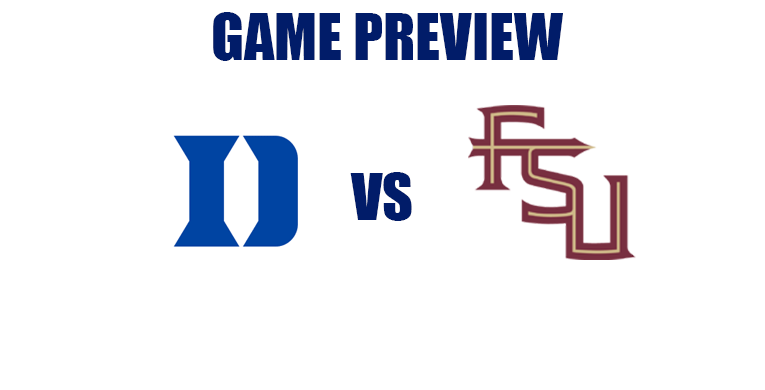 By Brian HoraceFebruary 27, 2017No Comments

Tuesday the Duke Blue Devils will host a hot Florida State team who blew them away in their first meeting in January 88-72. Duke did play that game without senior forward Amile Jefferson who is still, along with junior Grayson Allen uncertain for this the second meeting of the year. In the first meeting Xavier Rathan-Mayes scored 18 of his 21 points in the second half, while Dwayne Bacon and Terance Mann had 13 points apiece. Duke was paced by sophomore Luke Kennard who scored 23, freshman forward Jayson Tatum added 21 for the Devils in the loss. Duke totaled 16 turnovers in the game and was out-rebounded 38-30. In the last 10 meetings between the schools Duke holds the edge 6-4.

Florida State has kept pace in the Atlantic Coast Conference race, remaining two games behind league leader North Carolina entering the final week of the season. Knowing for sure they will be a apart of the NCAAT has not caused the Seminoles to be complacent. The Noles are boasting one of their best season under Leonard Hamilton and are one of the best teams in the country this year. It’s hard to imagine Florida State entering Cameron Indoor Stadium feeling like anything but the favorite in this game the way they manhandled Duke earlier in the season. The uber athletic Seminoles like to push the pace and in the last meeting dominated Duke in nearly every category including fast break points, points off of turnovers, points in the paint and second chance points.

The Seminoles notched a 2 point win at Clemson cementing themselves as an ACC contender. Clemson’s Marcquise Reed came up short on a mid-range jumper with 5 seconds left in regulation to give Florida State the win 76-74.

Florida State doesn’t need to change a thing. They beat the Devils running away in the first meeting. The pace in which they play lends itself to a distinct advantage over Duke who have struggled with transition defense the entire year. This long athletic lineup is tailor-made to give Duke issues and it will be interesting to see how Coach Hamilton chooses to attack Duke.

Duke has to do a lot of things differently, it’s pretty cut and dry that the post season is generally predicated on guard play which Duke is sorely lacking – at least when it comes to both ball-handling and play-making. Frank Jackson is the closest player Coach K has to an actual point guard and he is that position in size only. Jackson can clearly score the ball dropping 16 in his last outing but costly turnovers helped fuel the Miami victory over Duke. Jackson was not solely responsible for the miscues, several Dukies had multiple turnovers in the game.

Duke was a mess offensively and had trouble running offense against the Miami Hurricanes. Without its 3rd leading scorer Grayson Allen Duke managed just 50 points. Duke shot 23.8% from 3-point range and 31.8% overall. Luke Kennard, the usually points machine for Duke, wasn’t his efficient self only shooting 6 for 20 and scoring 16 points. Jayson Tatum has been the fire to Kennard’s Ice but against Miami could only muster 4 of 14 shooting and 8 points.

It’s pretty simple for Duke in this game – do what they have not been able to do of late. Offensively Duke needs to find a way to both cut down on the unforced errors and to be more efficient on the offensive end. This might be accomplished by getting some touches for the bigs. It’s clear that Duke has to be able to account for what happens when the 3’s aren’t falling – perhaps going inside out instead of simply taking every 3 available might keep defenses honest. Duke having absolutely no inside game is a detriment to other facets of the offense.

Being senior night in Durham I expect the crowd to be on fire. Even though it’s been reported that Amile Jefferson and Grayson Allen may not play I can’t imagine, in what might be the final home game for both players along with Matt Jones, that they’ll be missing from the lineup. If Florida State can survive the initial surge of Cameron emotion and be methodical about their approach they can win this game. Duke clearly has to tighten up on both ends and win the battle on the boards as well as 50-50 balls. This is a toss-up game and with Duke not being a team that has shown the ability to maintain any sort of lead or a team able to string together stops on the defensive end – this game will be close but I think Duke wins.