By Brian HoraceSeptember 1, 2017No Comments 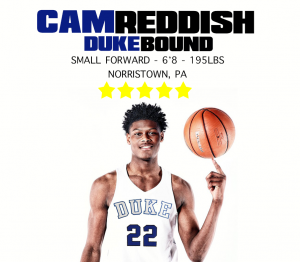 5 star, 2018 small forward Cam Reddish committed to Coach K and the Duke Blue Devils today, on his 18th birthday, becoming the second 5 star member of the class to pledge to Duke. Cam is a guard who happens to live in the body of a forward. Cam is the kind of athlete Coach K and company tend to covet with a versatile all around game, Reddish cam be plugged into many positions. His high basketball IQ is a very underrated pert of his game that will serve him well at Duke. Reddish is ranked #3 by 247Sports and #4 by ESPN in the 2018 class.

Reddish averaged 22.6 points and 7.8 rebounds per game in the Nike EYBL and was also selected to play for the USA Basketball u19 in the FIBA World Cup.

Reddish has a very smooth game and while he isn’t uber athletic he shows flashes of it in the open court. He does everything well and will fit perfectly in the Duke system of interchangeable parts.  Reddish chose Duke over Kentucky, UCLA, Villanova and Connecticut.