By Brian HoraceDecember 4, 2014No Comments 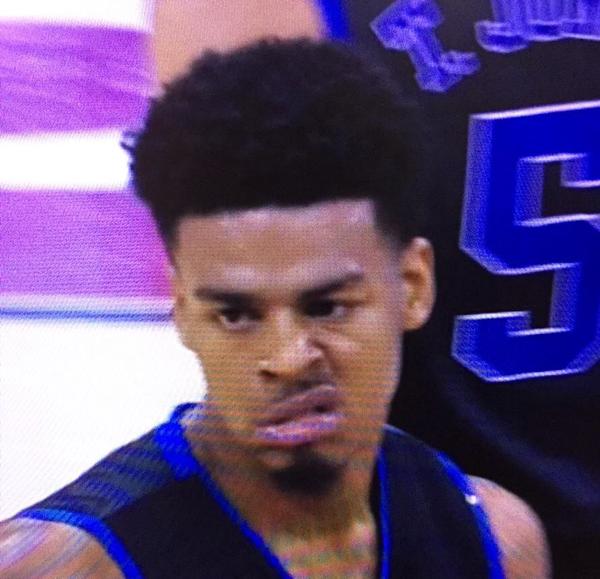 In a game that very few had Duke coming out of with a victory, slowly, methodically, the Duke Blue Devils put together an impressive victory at the Kohl Center against the number 2 team in the nation 80-70. I saw a tweet during the game that said ” Stones and Onions” this Duke team had both. A team that starts 3 freshman came in and beat by double digits a final four team from last year.

By all accounts this game was horribly officiated but despite that and a very raucous crowd Duke was able to do to Wisconsin what a lot of teams over the years have done to Duke – spread them out and drive to the basket. Wisconsin got 17 points from senior big man Frank Kaminsky but Duke was able to hold him to only 5 of 12 shooting. The player of the game for the Badgers had to be guard Treason Jackson. Jackson shot 7 of 12 from the field and lead all scores with 25 points.

Sheed is that fire tonight

For Duke the formula was simple let the guards do what they do – and freshman Tyus Jones was a stone cold stud. Jones scored 22 points and hit shot after shot when Duke needed him the most, quelling Badger runs. Jones also had 6 rebounds, 4 assists to only one turnover – Not his best game assist wise but against the number 2 team in the nation it’s very hard to say he could have done any better. Rasheed Sulaimon had arguably his best game of the year, coming off the bench and scoring 14 points. Sheed was fire tonight shooting 5 of 8 fro the field and hitting huge shots against the stout Wisconsin defense. Duke did not get a monster game from freshman Jahlil Okafor but 6 of 8 shooting and 13 points against a very tough Badger team.

As a team Duke held its own in the rebounding department, out-rebouding Wisconsin by 1. The highlight of the night was the impressive team shooting by the Blue Devils, shooting over 65% as a team in the Kohl Center is unheard of, Duke also shot 58% from beyond the arc. In a masterful defensive scheme by Coach K, Duke would utilize double and triple teams but also cut off good passing angles to neutralize the efficiency of player of the year candidate Frank Kaminsky. Duke would hold Wisconsin as a team to just over 40% shooting which normally isn’t a horrible stat but when you give up 65% it was clear why Duke got the win. 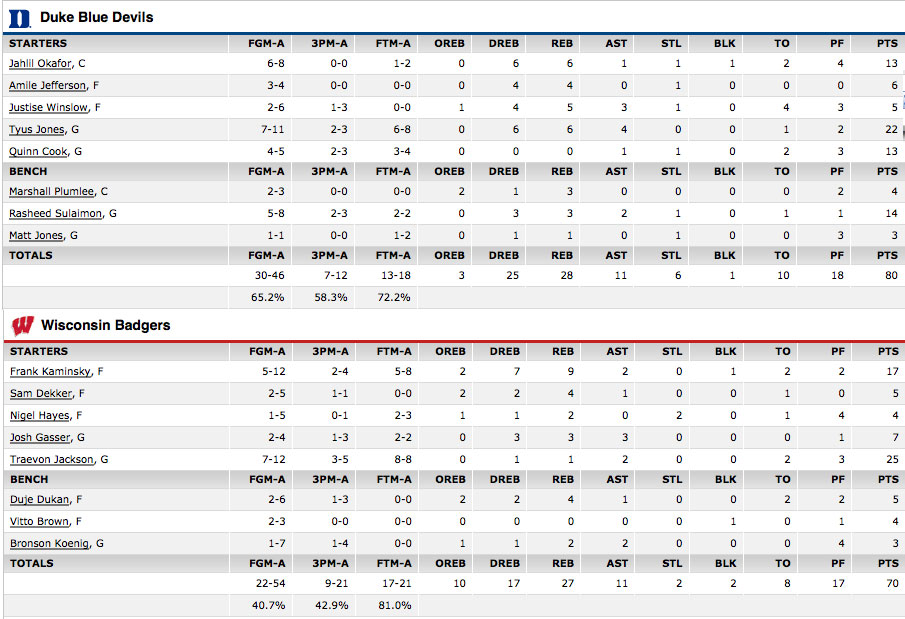