By Brian HoraceMarch 15, 2014No Comments

Once again, this team has us completely tethered to our defibrillators as they just barely get through the Clemson Tigers in their first game of the ACC Tournament.  Duke managed to build a 13 point lead in the game, but anyone scouting this team knows that Duke is susceptible to doubts of toughness and offense, especially during crunch time.

With this Clemson team, it’s really hard to say if Duke just doesn’t match up well to them or if it’s just consistently poor execution by the Devils.  One thing you have to say is that Clemson is scrappy, they are a tough team and a tough out. Duke did not do themselves any favors by looking completely dazed for a lot of the second half.  It’s as if they had no idea what plays to run or who they should guard, or even IF they should guard.  It was common during this game to see Duke players completely out of place on defense and more or less screaming instruction at each other on offense, sometimes directly after a timeout where the play was just delivered!

Duke did do some things well in this game: Duke was strong on the boards against a really physical and athletic Tiger squad.  Duke won the rebounding battle 34-25, with Amile Jefferson grabbing 13 boards in the game (the only player in the game to have double-digit rebounding); that edge led to a 13-to-6 advantage in second chance points.  Duke also surprisingly only turned the ball over 6 times to 10 for Clemson, but Clemson had a slight edge in points off turnovers, 9 to 8.

Neither team shot well from 3-point range, and for Duke to win games comfortably that has to be something they do; clearly without scoring from behind the arc, Duke becomes just a good team and not a great team.  They rely on their ability to stretch the defense, and that wasn’t something they were able to do against Clemson.  Duke did find some holes in the Clemson defense and were able to score over the top on a couple of lobs from Quinn Cook to Rodney Hood and Jabari Parker.  Where Clemson held the edge over Duke was defense: Clemson was able to get stops when it needed for most of the game and that aided them in quickly dispatching of the Duke lead.

The game would come down to a drive by Rod Hall, who went the length of the floor with 3.8 seconds left and Clemson down by 1 point.  Hall attempted to split two defenders on his way to the basket, but inexplicably launched himself toward the rim as Tyler Thornton punched the ball free.  At postgame, Hall would say he was bumped on both sides.  The replay shows that was not the case at all.  So in my eyes, not a lot of controversy, but if you are the opposing fan base, well, it’s Duke and that is how it usually goes.  If it’s close, it’s a conspiracy.

Duke seemed to have a lot of trouble executing on offense.  Some of that was Clemson but the look and words from Coach K show that the flaw was more so self-inflicted.  User-Error as we say in the tech business.  Duke seemed to do a lot of side-to-side dribbling instead of attacking the basket, they could have easily built and maintained a lead (it seems) if they stayed aggressive.  While I understand the thought process behind making the game shorter, this team does not execute well enough under pressure to make that a viable option too early.

Defensively, this team was a complete mess.  Too much of seeing guys standing in the lane arms at their side while the Clemson players either go right around them or get side contact and fouled.  I don’t hold back much of my thoughts on Duke attempting to take so many charges, but it was comical in this game. I understand taking charges is a part of the game, but so is actually playing defense, stopping the ball, moving your feet.  This team seems to just try to use it as a cop out, instead of being strong and tough.  It’s ugly.  I believe it sends a message to the other team that you do not have the capacity to play defense one-on-one, and you lack the toughness to even attempt to.  Just my opinion, but at some point you just have to shake your head.  I’m well aware of where the block/charge call stands in Duke lore, but if you are going to use it, use it correctly.  Do not let it stifle your own defensive aggressiveness.

I try not to be critical of players as individuals because they are just kids.  That being said, I really want to see Jabari Parker return for a second season, both because I am a selfish Duke fan and a concerned one.  Defensively he is still lost, he has yet to really grasp what Duke is trying to do.  I think its best to go to the league when your game has been seasoned on both ends of the floor, and he just isn’t there yet.  I also believe as skilled as he is, he still needs to be able to keep his fire throughout the game.  There are lapses at times and he is still settling a lot of times for what the defense gives him.  There are glimpses of complete and utter greatness, but there are also glimpses of unwillingness to BE THE MAN.  He is the man and needs to wear the crown, no matter how heavy. 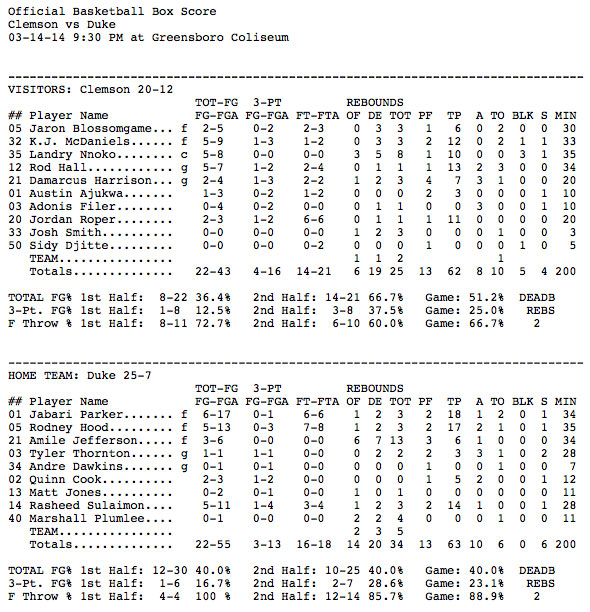