Watch and Feel the Fight with the EA SPORTS(TM) UFC(R) College Tour Sponsored by MusclePharm!

By Brian HoraceDecember 4, 2014No Comments

WATCH AND FEEL THE FIGHT WITH THE EA SPORTS™ UFC® COLLEGE TOUR SPONSORED BY MUSCLEPHARM!

Want to get your hands on EA SPORTS UFC and watch some UFC Pay-Per-View events this fall?  Love to compete against other students for awesome prizes and merchandise?  Look no further, EA SPORTS UFC is bringing you all the action to your campus with the UFC College Tour sponsored by MusclePharm.

The EA SPORTS™ UFC College Tour will be hitting 30 college campuses across the United States to give college fans the chance to play EA SPORTS™ UFC on the PlayStation®4 computer entertainment system while watching UFC Pay-Per-View events at a local sports bar/restaurant.  Join us and FEEL THE FIGHT for yourself.

The EA SPORTS™ UFC College Tour will be stopping in Durham, NC at Tobacco Road for the following date and UFC Pay-Per-View event. Come out early to get in the game and feel the fight with EA SPORTS™ UFC! 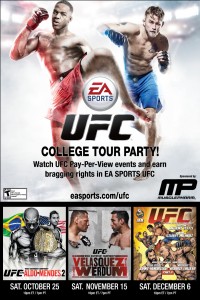 EA SPORTS™ UFC – With its first new major sports league partnership in over a decade, EA SPORTS presents EA SPORTS UFC. The next-generation of fighting has been built for the PlayStation 4 and Xbox One consoles by the team behind the critically-acclaimed EA SPORTS Fight Night franchise. Powered by EA SPORTS IGNITE technology, EA SPORTS UFC brings the action, emotion and intensity inside the Octagon™ to life in ways that were never before possible. The next-generation of True Player Motion not only showcases the diverse, powerful and fluid of attacks of elite mixed martial artists through Precision Movement, Dynamic Striking and Strategic Submission Battles, but also brings the combatants to life with Full Body Deformation and Real-Time Exertion. The simulation of Human Intelligence takes leaps forward with the strategic and adaptive MMAi system and is expressed through the most realistic characters ever created in a sports game.  Step into the Octagon™ with the most realistic take on fighting ever achieved. Powered by EA SPORTS IGNITE technology, every fighter, strike, takedown and submission will make you feel the fight.

About the Ultimate Fighting Championship®

Owned and operated by Zuffa, LLC, the Ultimate Fighting Championship (UFC®) is the premier mixed martial arts (MMA) organization and largest pay-per-view event provider in the world. Headquartered in Las Vegas with offices in London, Toronto, Singapore and Sao Paulo, UFC produces more than 40 live events annually that consistently sell out some of the most prestigious arenas around the globe. UFC programming is broadcast in 129 countries and territories to nearly 800 million TV households worldwide in 28 different languages. The UFC has a multi-year broadcast agreement with FOX in the U.S., which annually includes four live events broadcast on the FOX network, as well as The Ultimate Fighter® reality television show and thousands of hours of programming on FOX Sports 1 and FOX Sports 2. In 2014, UFC launched UFC FIGHT PASS™, a digital subscription service with exclusive live events, thousands of fights on-demand and original content. The UFC organization also licenses over 100 UFC GYM® locations, and owns UFC.TV® (offering live event broadcasts and video on-demand around the world), UFC FIT® (an in-home fitness and nutrition program), UFC Magazine, and has a videogame franchise with EA SPORTS, UFC Fight Club®, UFC Fan Expo®, UFC branded apparel, DVDs and Blu-rays and Topps Trading Cards. For more information, visit UFC.com and follow UFC at Facebook.com/UFC, Twitter and Instagram: @UFC.