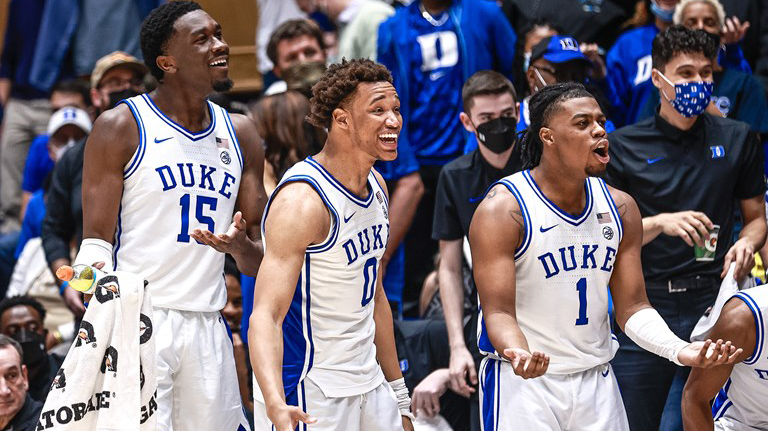 By Brian HoraceDecember 16, 2021No Comments

Duke took down the Mountaineers of of App State 92-67. The score however was not quite indicative of the flow and pace of this game. App State took advantage of Duke on the boards and on the perimeter, especially in the first half that saw the Blue Devils only able to manage a 13 point lead. Duke was out-rebounded in the first half 18-17 in the first half and gave up 17 points to grad student Michael Almonacy. Almonacy wouldn’t score again. Duke ended the half on a 16-6 run but unfortunately for the Blue Devils the Mountaineers began the second half on a 13-5 run to shrink the Duke lead to 5, capped off by 2 Justin Forrest free throws. The Blue Devils, sparked by an AJ Griffin 3-pointer, responded with a 14-2 run to regain the momentum. Duke never looked back from that run, eventually pushing their lead to 25.

Wendell Moore Jr. was the difference maker for the Blue Devils, his clutch shots helped Duke extend their lead and gave the Blue Devils much needed life and his middle of the lane drive and dunk brought the Cameron crowd to their feet. Moore had a huge game for the Blue Devils, stuffing the stat line with with 21 points to lead Duke, going 4-4 from the 3 point line. Moore Jr. added 5 rebounds and 6 assists as well. Freshman Paolo Banchero added 16 points and 5 rebounds. Mark Williams blocked 3 shots and had 2 steals on his birthday night. For the second straight night Trevor Keels shot 2-5 from beyond the arc scoring 11 points. Sophomore Jeremy Roach dished 6 assists and added 10 points, going 2-5 from beyond the arc. Freshman forward AJ Griffin scored 11 points, scoring in double figures for the second straight game. Griffin shot 3-7 in 19 minutes ands went 3-3 from the free throw line.

The Blue Devils were able to shoot 50% from beyond the arc and moved the ball much better than their last 2 games. That’s 2 games in a row of shooting 50% or better for the Blue Devils who shot 55.6 % against South Carolina State.

The second straight games for the Blue Devils shooting 84% or better from the free throw line.

Duke was subpar on their perimeter defense for the first time this season giving up 5-13 shooting from beyond the arc. Duke was better in the second half only allowing 23% shooting.

Rebounding was an issue all game long as it has been for a lot of the season. Duke was out rebounded by 1 (31-30). Which lead to 19 second chance points for the Mountaineers. The Blue Devils were out rebounded in their last game against South Carolina State 42-39 which led to 17 second change points.

Next up for the Blue Devils a newly scheduled replacement game against Loyola (MD) on Saturday.