By Brian HoraceJuly 3, 2019No Comments 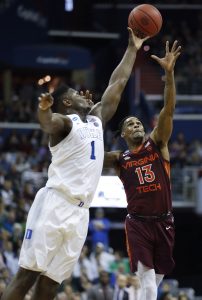 GREENSBORO, N.C. – Consensus Men’s Basketball National Player of the Year Zion Williamson has been selected as the 2018-19 Male Athlete of the Year in the Atlantic Coast Conference, as voted upon by a select media panel (82 voters).

Williamson, who earned the 66th Anthony J. McKevlin Award as the conference’s premier male athlete, is the 16th Duke player to earn the award – the most in league history. Williamson led Duke to the 2019 ACC Men’s Basketball Championship, an Elite Eight appearance in the NCAA Tournament and a 32-6 overall record.

“The McKelvin Award is the premier athletic honor in the ACC, and there was no one more deserving this season than Zion,” said Duke head coach Mike Krzyzewski. “It is an honor for our program, and our institution, to receive the award. Zion represented himself, his family, and our program with class, while having such a tremendous season. I couldn’t be more proud of him, and I know the best is yet to come.”

Williamson finished among the ACC’s top five in seven major statistical categories, including co-leading the ACC in points (22.6 – 15th in NCAA), leading the conference in field goal percentage (.680 – 2nd in NCAA) and offensive rebounds (3.5 – 9th in NCAA). The Spartanburg, South Carolina, native was second in the ACC in steals (2.12), third in rebounds (8.9), third in double-doubles (14) and fifth in blocked shots (1.8).

In addition to earning consensus first-team All-America honors, he was named ACC Player of the Year and ACC Tournament MVP, becoming the first freshman in league history to achieve both in the same season.

The No. 1 overall pick by the New Orleans Pelicans in last month’s 2019 NBA Draft, Williamson was named on 36 ballots to prevail in a tight race over Clemson defensive tackle Christian Wilkins, who received 28.

The ACC Athlete of the Year Awards are given in memory of distinguished journalists. McKevlin was a sports editor of the Raleigh (North Carolina) News and Observer, while Garber, of the Winston-Salem (N.C.) Journal, was a pioneer as one of the first female sports journalists in the nation.

Most McKelvin Awards, by Institution

Most McKelvin Awards, by Team