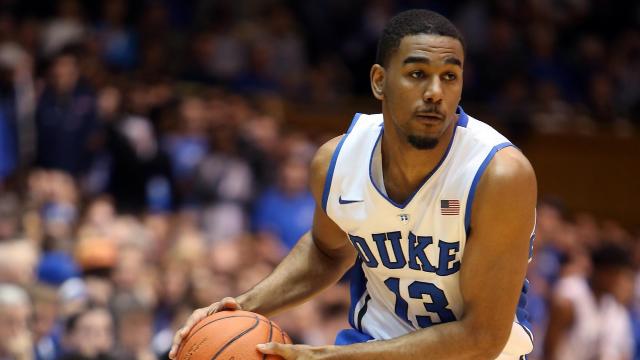 Condensation is the change of the physical state of matter from gas phase into its liquid phase. It can also occur when something cold, like a drink, is taken from the fridge and allowed to warm. Duke was ice cold for most of the second half but a late second half run that carried on into the second half saw Duke get wet, much like the condensation on a soda can. They heated up. The 1-3-1 zone was the catalyst for this run and it took Yale from a confident team to a jittery one. Yale was unable to solve the Duke defense until the waning moments of the second half.

The first half saw Yale completely control and confound the Blue Devils with a commanding 26 to 16 edge in points in the paint. Duke was out-rebounded by Yale in the first half Duke 18-11 and yet was able to come back from 8 down to lead at the half by 2.

The second half saw more of the 1-3-1 from Duke and continued sloppy play by Yale. By games end Duke had evened up the points in the paint at 36-36 and the rebounding number also ended dead even at 37. Where Duke had a decided edge was in free throw disparity where Duke managed a 17-7 advantage. Dukes stout second half defense held the Bull Dogs to 25 points total in the second half on their way to a 80-61 victory.

Duke was lead by junior Matt Jones who, on 7-11 shooting, scored 17 points. Jones hit timely 3’s during Dukes first and second half runs. Defensively Yale keyed on Grayson Allen but the sophomore guard was still able to drop in 14, well off his average. Allen did have 5 assists in the game as he found other ways to contribute. Duke also got double figure efforts from freshmen Luke Kennard and Brandon Ingram who scored 12 and 15 respectively. Neither shot the ball well but both were major contributors earning major minutes despite not starting.

Duke will look to improve its defense going forward without relying on the zone but as the younger players figure things out K may end up using it more and more out of necessity.

70.8% from the free throw line is huge for Duke.
12 steals against a veteran Yale team is a great number.

Rebounding evenly a much smaller Yale team is a sign of a lack of intensity and ball watching instead of boxing out.

Holding Yale to 25 points in the second half, marked improvement over the 36 first half points.