By Brian HoraceFebruary 14, 2016No Comments

In a typical ACC grudge match, Duke and UVA grinded, fought and clawed. In a game that could have gone either way down the stretch Malcolm Brogdon put UVA up in the waning seconds of the game with a blind lay-up over Matt Jones. Duke would counter with 6 seconds left, giving the ball to sophomore Grayson Allen and essentially telling him to “go get it.” Allen drove the ball to the paint and eurostepped his way into a game-winning bank shot to win the game in Cameron Indoor Stadium – 63-62. 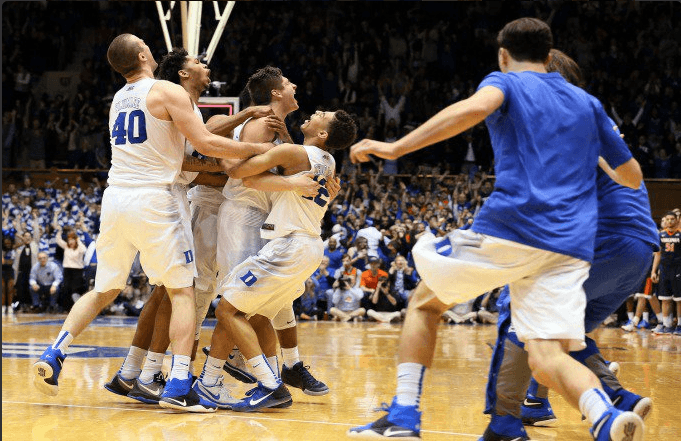 UVA would take an 11 point lead in the first half before Duke, on the strength of its perimeter shooting, was able to trim the lead to 3 at the half. Duke stormed out of the half eventually regaining the lead from the Cavaliers. Duke would stretch the lead to 7 on a Grayson Allen dime to junior guard Mat Jones but UVA would tie the game 6 minutes later. Duke and UVA would volley back and forth until the closing moments of the game.

Brandon Ingram paced Duke with 25 points, single handily at times keeping Duke in the game on 10 of 22 shooting. Ingram also continued his strong rebounding efforts of late by pulling down 7 boards in the game. Grayson Allen who hit the game winner for Duke scored 15 on 4 of 11 shooting, surprisingly Allen did not hit a 3 pointer in the game going 0-4 from beyond the arc. Allen also pulled down 7 rebounds and dished out 7 assists. The only other Duke player scoring in double figures for Duke was Matt Jones who scored 14 on 5-6 shooting.

Duke played man-to-man essentially the entire game which has generally been reserved for the second half of games when Duke could be much more aggressive.

Duke had beaten top 15 teams in back to back games. First 2 wins against ranked teams this year.

Minuses:
Free-throw shooting was an issue for Duke in this game. Duke shot 9-16 for 56%. Duke also missed the front ends of 2 one and ones at a time when points were at a premium.