By Brian HoraceDecember 10, 2014No Comments 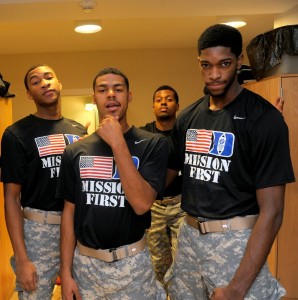 Before the season started, I wrote a long feature article documenting how the Duke program has changed and adjusted, first to the early entry players, and then once again when the one and done rule came into effect. As far as determining what it takes to succeed as a team with the one and done types, I concluded that it was important to have developed upperclassmen who could lead both verbally and by example. These upperclassmen, having learned the Duke system in their time on the team, could show the youngsters the ropes. That way team specific roles could be filled without too much weight on the shoulders of inexperienced 18 year-olds.

Quinn Cook, after an injury-plagued Freshman season, was Duke’s starting point guard the last two seasons. He played adequately, but his skills at the position were not enough to take Duke to the next level. The mentality of a point guard is something that is tough to take away once it is ingrained, and Quinn, after playing his entire basketball career as the guy responsible for controlling his team on offense, was now asked to play shooting guard in his Senior year. It must still be tough accepting the role, but Quinn knows that he hasn’t won the titles that ex-Duke players come back and reminisce over. In order to capture his own banner, he has put team first. I questioned his ability to do this, having a hard time imagining him fully embracing playing off the ball. At this point my doubt seems crazy, considering Quinn has immersed himself in teaching Tyus Jones the ways of the position while knowing that Jones would eventually take the reins of the team from him. Quinn has dropped the overemotional fits that plagued him the last three years, taking the role of a captain very seriously and quickly has become the unquestioned leader on offense. Always a great spot up shooter, his impact goes far beyond stats. Respect to Quinn Cook.

Rasheed Sulaimon showed a ton of promise as a Freshman, but came into last year’s Sophomore season out of shape and his play suffered. Being benched by Coach K sent a strong message, and Sheed finished the year strong, seeming on the verge of a breakout Junior season. But that is not what Duke needs from him this year. He guarded Tyus during the offseason, making life hell and toughening up the young point guard. Once the season started, he’s been asked to come off the bench and provide lockdown defense as well as giving the offense a spark.  Freshmen can be up and down early on, so while Sulaimon has fully bought into his new role, he was ready in Duke’s biggest game against Wisconsin to step up when Justise Winslow struggled. Making clutch shot after clutch shot, he showed an ability to take his defender off the dribble in a way that only Winslow had proven throughout the early part of the season. Though Sheed will now once again go back to being a role player, the guy who I believe would be the centerpiece of many Division I teams is always ready for his next time to shine. His attitude to do whatever is necessary for the good of the team cannot be overstated, and his impact goes far beyond stats. Respect to Rasheed Sulaimon.

Amile Jefferson was a late 2012 Duke commit, joining Sulaimon in a small recruiting class. He seemed to go under the radar at first, but he soon showed a basketball IQ that allowed him to succeed on the court without overwhelming athleticism. The ball simply finds a path to Jefferson on rebounds, and I thought it was lucky at first. Watching Amile for over two years, though, has made me stop questioning anything having to do with luck. Amile came into this year, his Junior season, possessing gumby arms perfect for rebounding, as well as an infectious enthusiasm for playing the game. But more was needed of him, and Amile has delivered. His basketball IQ can’t  be used just for his purpose anymore. Freshmen can adjust quickly to college offenses, but defense is another story. Last year’s Duke team proved that defensive concerns can bring an entire team down, and Amile was determined to not let that repeat. As the defensive leader, he is constantly talking, coaching on the floor, calling out screens and switches, and directing his teammates to their correct spots on the court. Though I hoped to see Amile develop a mid-range face up jumper that could help on offense (especially against zones), he has contributed in so many other ways. I have yet to see Duke players look to the bench for direction like I saw so many times last year after defensive breakdowns. And Jefferson deserves a ton of credit for this, proving that his impact goes far beyond stats. Respect to Amile Jefferson.

The Duke Freshmen have been tremendous this year, but all of them have also been inconsistent game to game. This will continue at times, which is why Duke needs steadying forces to guide them, give them a shoulder to lean on, and take control when necessary. It is early in the year, and the entire team still has a ton of potential for growth. This growth will happen in ways far beyond stats, though, and two Juniors and one much-maligned Senior have a lot to do with this. Respect to the Duke 2014-2015 upperclassmen.

*I realize Marshall Plumlee is technically a redshirt Junior. He has provided solid minutes in relief of Jahlil Okafor, and I am not trying to disrespect him. With his injuries and spotty playing time in his first three years, he hasn’t had the opportunity to grow in Duke’s system like the other three. Hopefully he will continue to improve to the point where I can happily feature him as an impact upperclassman next season.*

Duke in Depth: Duke vs. Virginia

Duke in Depth: Duke vs. Clemson