By Randy DunsonDecember 8, 2014No Comments 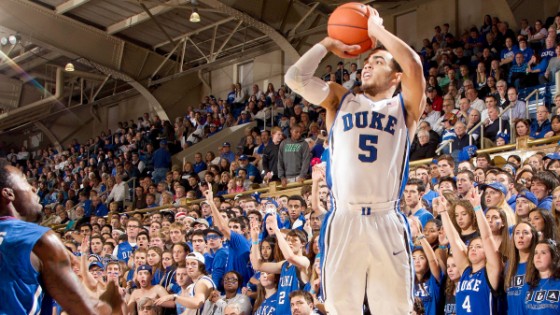 After a tough stretch in Duke’s schedule that saw the Blue Devils face eight teams over a 19-day span, including two top-20 matchups, the team finally finds some reprieve. Duke embraces a 14-day break before returning to action against Elon at home on Dec. 15.

The recess is both welcome and deserved. Most recently, the Blue Devils traveled to Madison, Wis., to face off against the second-ranked Badgers in Duke’s first true road game of the 2014-15 season. The game lived up to the hype.

Duke’s First True Road Test of Season Although the Blue Devils faced No. 19 Michigan State, Temple and Stanford all away from the friendly confines of Cameron Indoor Stadium earlier in the season, Duke’s first true road game came against No. 2 Wisconsin on Wednesday in Madison. Many looked forward to the much anticipated meeting between Duke’s Jahlil Okafor and Wisconsin’s Frank Kaminsky.

All eyes tonight will be on arguably 2 best big men in country as #4 Duke plays #2 Wisconsin » http://t.co/cenbxm8of2 pic.twitter.com/dLytEkWBfT

The Blue Devils rose to the occasion, shooting 65% from the field, the best field-goal percentage allowed by Wisconsin this season, en route to the team’s 80-70 win over the Badgers.

Duke shot 65%, the 3rd-highest by any team against an AP top-5 opponent in the last 15 seasons, best of any road team pic.twitter.com/SMDHfKTn3H

Facing stout competition in a hostile environment, Wednesday’s game allowed fans to see how Duke’s newest members would respond under such adverse circumstances. Freshman Tyus Jones showed no signs of nerves, posting a career night with 22 points on 7-of-11 shooting from the floor in 37 minutes of action. Jones also contributed four assists, bringing his team-leading total to 46 for the year. Fellow freshman Justise Winslow put the exclamation on the team’s victory in the waning moments of the game with a huge dunk.

The #NaismithTrophy Men’s Top 50 Watch List has been released! See who has impressed the voters early this season: http://t.co/pYabG5PKxB