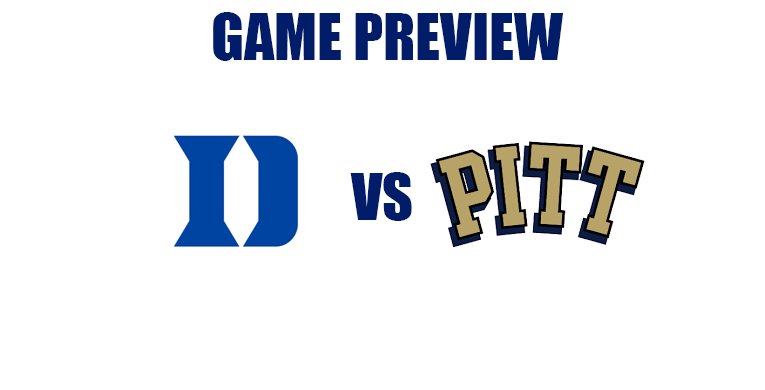 By Randy DunsonFebruary 3, 2017No Comments

It is an ACC clash down on Tobacco Road. The slumping Pitt Panthers hope to spring an upset as they face the #21 Duke Blue Devils in front of the Cameron Crazies Saturday afternoon. Pitt lost their seventh straight game with an 80-78 road loss to #12 North Carolina Tuesday. Duke won its second straight by taking down #20 Notre Dame 84-74 on the road Monday. The teams have split four previous meetings with Pitt taking a 76-62 home win in the last matchup on February 28, 2016.

You have to give Pitt full marks for effort in their first game this week on Tobacco Road. The Panthers battled all game long, bombing away from the perimeter to punish the Tar Heels for sticking with a two big man lineup. Pitt came up a bucket short though and suffered a seventh straight defeat. The Panthers shot a solid 55.6 percent from the floor and tied a season high by connecting on 13 of 29 three-point attempts. Pitt’s defense hurt them as North Carolina shot 50 percent from the field. In addition, the Tar Heels won the rebounding battle 31-23 and went 13 of 19 at the line. Pitt finished 5 of 5 at the stripe. Cameron Johnson had 24 points to lead Pitt in the loss.

The Panthers are 100th in the nation in scoring offense with 76.8 points per game. Pitt is 185th in rebounding with 36 boards per game and is 82nd with 15.1 assists per contest. Defensively, the Panthers have struggled, ranking 293rd by allowing 77.4 points per contest. Pitt is shooting 45.1 percent from the floor as a team. The Panthers hit 8.4 three pointers a game and knock down 37.4 percent of their attempts from beyond the arc. Michael Young is second on the team in scoring for Pitt with 20.3 points plus 7.3 boards a night. Jamel Artis is averaging 20.9 points, five rebounds, and 3.2 assists per contest. Cameron Johnson is good for 12.2 points per game. Sheldon Jeter, Chris Jones, and Ryan Luther are each putting up at least 6.6 points a night for Pitt so far this year. No one else puts up even three points a game for the Panthers.

Duke has won back-to-back games after taking down Notre Dame in South Bend. A bigger addition for the Blue Devils is the return of coach Mike Krzyzewski, who last coached the team on January 4. He missed the last month after recovering from back surgery. However, in my opinion, I feel that his return has more to do with the aura that surrounds him. Anyway, Duke jumped to a 12-point halftime lead and kept the Fighting Irish at bay in the second half. The Blue Devils shot 51.9 percent from the floor and went 5 of 12 from three-point range. Duke made the most of their free throws, cashing in 23 of 24 attempts at the line. The Blue Devils also had a 38-26 edge on the glass in the game. Grayson Allen led Duke with 21 points in the win.

The Blue Devils are currently 20th in the nation as they pile up 83 points per contest. Duke is 67th on the glass as they collect 38.3 rebounds per contest. This number steadily dropped during Jefferson’s absences as they were ranked in the top 25. The Blue Devils are tied for 168th by dishing out 13.8 assists a night. Duke is 72nd in scoring defense by allowing an average of 68 points per game. The Blue Devils are shooting 48.3 percent from the floor as a team. Duke averages eight three pointers a game and has knocked down 36.7 percent of their three-point attempts early on. Grayson Allen is third on the Blue Devils with 15.6 points plus 4.5 rebounds and 3.9 assists per game this season. Frank Jackson chips in 10.3 points a night while Luke Kennard has put up a team high 20.2 points, 4.4 boards and 2.5 assists a game. Jayson Tatum (16.1 points, 6.9 rebounds) and Amile Jefferson (11.9 points, 9.3 rebounds) are solid scoring options as well for coach Mike Krzyzewski. Chase Jeter, Matt Jones, Harry Giles, and Marques Bolden are key pieces in the Duke rotation, although Bolden’s minutes have dropped sharply over the last few games.

The Panthers played North Carolina tough but still fell short and now have dropped seven straight games. Duke is at full strength for the most part and that gives them a ton of weapons to handle opposing teams. Pitt is just 1-4 on the road this season while Duke has gone 10-1 at home this season. The Panthers may battle but the return of Coach K, playing on the road and the Blue Devils’ depth is too much for Pitt to handle.

Offensive numbers have not been a problem for either team this season. Pitt overhauled their game plan when they let Jamie Dixon go and brought Kevin Stallings in to coach. The Panthers do not have a ton of depth to work with though so if Young or Artis struggles or is in foul trouble, things are a bit dicey for Pitt. Duke has an abundance of young talent, as seems to be the case every year. Having Krzyzewski back on the bench after he missed seven games recovering from back surgery is a good addition for the team as well. His experience, leadership, and ability to command respect are integral to getting the most from his young players.

Duke began this year with a lot of promise this is a team that beat MD and a team that beat a ranked UVA team. After that UVA win Pitt fell apart and lost 7 straight games. Pitt has been a head scratcher for sure this year. With losing to Louisville by 55 but them playing UNC tough losing by 2. This is a team with talent but clearly something is wrong. You can rest assured that Pitt is being coached up that to save their season beating Duke is an opportunity to shock the world. On the Duke side the return of Coach K from surgery should have the Blue Devils motivated to play their best game of the season. A three game winning streak would mean a lot to this team after the strife they have dealt with this season.

The over is 5-0 in the Blue Devils last 5 games following a straight up win, 10-1 in Blue Devils last 11 vs. Atlantic Coast, 8-1 in their last 9 overall and 4-1 in their last 5 Saturday games. Pitt has struggled to stop opposing teams from putting up points this season: 13 of their last 14 opponents put up at least 72 points with four breaking the 80-point barrier. The Panthers will get their points but give up a ton. I think this one goes over the number as Duke plays to potential, 90-75.