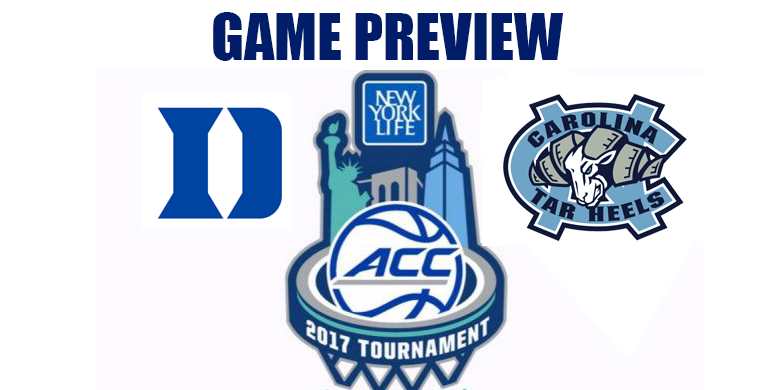 [x_image type=”none” float=”right” src=”https://www.dukeblogger.com/wp-content/uploads/2017/03/Firefox_Screenshot_2017-03-03T16-51-55.089Z.png” alt=”Great Site w/ Great Content” link=”true” href=”http://fruition.io/dashboards/duke-unc” title=”Great Site w/ Great Content” target=”blank” info=”tooltip” info_place=”bottom” info_trigger=”hover”]The North Carolina Tar Heels will collide with the Duke Blue Devils in the Semifinals of the ACC Tournament Friday night from the Barclays Center in Brooklyn. The Blue Devils edged Louisville 81-77 in their Quarterfinal matchup, and the Tar Heels handled Miami 78-53 in the Quarterfinals. Duke won the first meeting over the Tar Heels by an 86-78 score, and North Carolina replied with a 90-83 home win of their own in the second meeting. The history has been well documented, the battles between these storied programs live on long past the players eligibility. The games are never short on drama with each player vying to hit the shot or spark the run that will be talked about each time these two teams meet.

The 14th ranked Duke Blue Devils rallied in the second half to defeat the Louisville Cardinals 81-77 in the Quarterfinal round of the ACC Tournament on Thursday afternoon. The Blue Devils shot just 44% but hit 21 free throws and held Louisville to a 4 for 21 mark from three-point range. Jayson Tatum was phenomenal, sinking 25 points on 9 for 15 shooting. The freshman forward scored 19 points in the win over the Tar Heels, followed by 13 points in the loss, and is now averaging 16.1 points per game. Luke Kennard also had a big game in the win over Louisville, recording 24 points along with ten rebounds. The sophomore star was a force in both meetings against the Tar Heels this season, averaging 20 points in the first contest and 28 points in the second. Kennard has scored 20 or more points in three straight games, and is now averaging 20.1 points per game. The Blue Devils were very productive offensively against the Tar Heels this season but had a tough time on defense, especially in the 90-83 loss.

The sixth ranked North Carolina Tar Heels dominated in both ends of the court in their convincing 78-53 win over Miami in the Quarterfinals of the ACC Tournament on Thursday afternoon. The Tar Heels shot a sparking 53% from the field and held the Hurricanes to 35% shooting. Isaiah Hicks was outstanding, going 5 for 7 from the field for a team-high 19 points. The senior forward has now scored a combined 40 points in his last two games, and is averaging 12 points per game. Hicks went 7 for 9 from the field for 21 points in the 90-83 win over Duke last weekend. Justin Jackson recorded 12 points on a 5 for 11 mark on Wednesday afternoon. The 6-foot-8 forward has slowed down a bit over his last three games, and is averaging a team-leading 18.3 points per game. Jackson went 14 for 30 from the field for an average of 18 points in the two games against Duke this season. The Tar Heels played outstanding defense against Miami and managed to score 78 points against Miami’s stifling defense so Duke will need to be very sharp defensively in this one.

North Carolina is an offensive powerhouse, now averaging 85 points per game, good for 12th in the Country, and are shooting 47.3% as a team. The Tar Heels are allowing an average of 69.9 points per game, placing them 115th overall.

I am once again going with the opponents in this showdown. The Tar Heels were very impressive in their win over Miami, holding them to 35% shooting, and they held Duke to 44% shooting in the win last weekend. North Carolina shot over 50% in both meetings against Duke this season, and they are the stronger offensive team. Duke was not very impressive against Louisville on Thursday afternoon in my opinion, they allowed Louisville to shoot 48%, and if the Cardinals had more success from the free throw line, they would have won that game. The Tar Heels are the number one rebounding team in the nation and they are holding the opposition to 41.4% shooting which is better than Duke’s defense. Go with the Tar Heels in this one, 80-75.