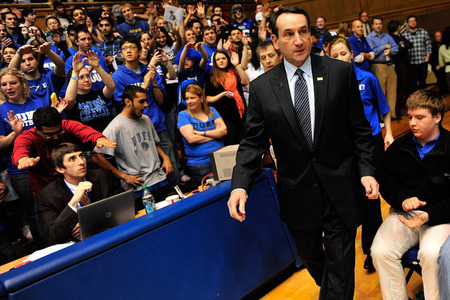 Coming off of 3 straight ACC wins NC State will be hungry to get a signature win at Duke. The way the Devils have played at home this year nothing is a sure thing. Duke as played better the last 2 games defense is still not a strong suit of this team.

Momentum is a fragile thing and Coach K is urging his team to leave the past in the past, nothing about the UNC or the MD game matters tonight. If Duke goes in believing the hype then they are sure to get smacked down. If they go in hungry they should be able to take care of business.

On offense Duke will have to be crisp and deliberate, eliminating the sloppy play. Ball movement and post passes are what I would like to see. If duke ends up trying to simply outshoot from the 3 point arc look for state to be close in this game, but if Duke utilizes its bigs and works the ball inside – out, it could be a long night for State.

Defensively NC State matches up well with Duke. While not an offensive juggernaut Lorenzo Brown is towering at 6-5, he should be able to pass and shoot over the smaller Duke guards while presenting issues on offense depending on who he guards. While not a deadly shooter, Duke this year, with its porous defense has made average players seem like world beaters.

Duke will also have to body up in the paint and be aware of C.J. Leslie. While Leslie is thin, he is athletic and the Duke bigs will have to stay alert and on the look-out for the lob while also keeping Richard Howell off of the boards. The 6-8 /250lbs junior is averaging nearly a double-double at just under 10 rebounds a game.

Scott Wood is another weapon for the Pack. Duke will have to keep Wood off of the 3 point line where he is most comfortable, he is their best 3 point shooter and at 6-6 Duke may have to counter with Ryan Kelly who while not a great defenseman should be able to keep Wood from getting open 3 point looks.

Coach K will look to see how his team comes out, duke will be hoping to come out firing and use the energy of the home crowd to try and knock NC State off early.

Duke will have to defend much better than they have or State will quickly gain confidence and Duke will be in a dog-fight.